Users of the mobile drip irrigation technology saw a 20% to 50% reduction in water use. 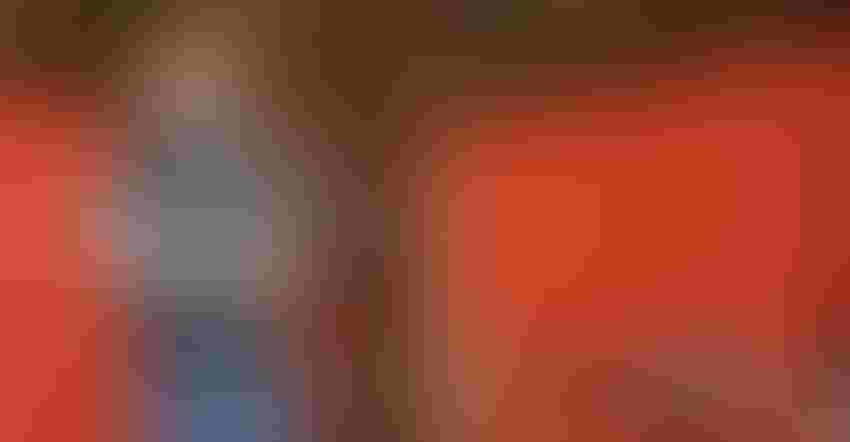 TALKING DRAGON-LINE: Teeter Irrigation owner Monty Teeter demonstrates how Dragon-Line works to provide the convenience and ease of management of a center pivot with the efficiency of drip irrigation.

Above-average rainfall has been the norm in western Kansas for the last five years, but that doesn’t mean that saving water is no longer important.

In fact, estimates put the amount of water already “mined” from the Ogallala Aquifer at half or more in some areas, according to Teeter Irrigation CEO Monty Teeter, who has been selling irrigation systems in the region for decades.

“That’s water that is gone, that we can’t get back,” he said. “Irrigation has been a major economic boon to agriculture, but we really need to find ways to make the water last.”

Along the way, he has become passionate about the need to conserve water.

“If we can reduce the amount of water we are using by 50%, we can add decades of life to the aquifer,” he said. Users of Dragon-Line have reported water use reductions from 20% to 50%, much of it from the reduced evaporation that comes from placing the water on the surface of the soil rather than above the canopy of the crop.

“Sub-surface drip is very efficient, but it has disadvantages,” Teeter said during a presentation at this year’s 3i Show in Dodge City. “It is expensive to install and once it is installed you can’t move it and you can’t change row widths. It is also very vulnerable to rodent damage.”

Dragon-Line, he said, provides the efficiency of drip but the convenience of a pivot that you can control from a cell phone and adjust to row width. It puts the water precisely between the rows and can be used to germinate the crop in very dry years. It also lets you avoid watering the wheel track, which results in less rutting in the field.

While Dragon-Line hoses are vulnerable to rodent damage, the problem can be significantly reduced by tying the hoses up off the ground for the winter.

Teeter said Dragon-Line costs only about $200 per acre to install, making it considerably less expensive that installing sub-surface drip.

He said that he has demonstrated the system in South Africa, Saudi Arabia and Sudan.

“Those countries have significant water issues and problems with drought,” he said. “They know the value of every drop of water.”

His latest research project is development of a Dragon-Line system for irrigating hemp.