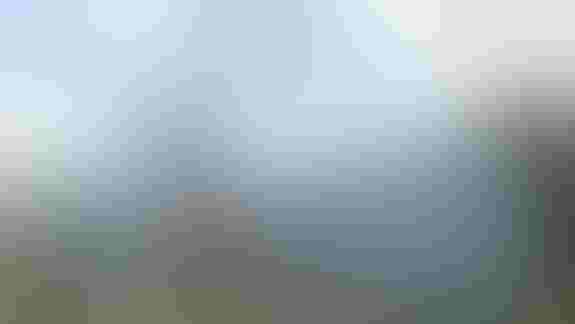 While on my yearly trip to FarmFest by Redwood Falls, MN, in the summer of 2007, one product that caught my eye was the AgriDry Bullseye bin system. After talking to the company founder, Eli Troyer, I decided that his system would be a good product to add to my existing facilities.

Drying and storing crops have always been challenges in the Corn Belt, and I have used the Bullseye controllers through two difficult seasons to assist me in my grain-management chores.

My bin site consists of five bins, all with full aeration floors, and fans, with the bulk of its capacity being three 42- x 25-ft. bins with a capacity of more than 30,000 bu. each. I also have a high-heat, continuous-flow dryer that was put into service in 2005. In 2008, I installed the Bullseye system on two of my 42-ft. bins. The first system included the controller, a temperature cable, and a static pressure gauge coupled to one 28-in. axial fan. The second system had similar equipment to the first, but it controlled two 28-in. fans and two in-line LP heaters.

During the 2008 harvest, I was faced with corn moisture that ranged from 17 to 26%. I started harvesting my drier corn, which was under 19% moisture, and putting it directly into the bins using aeration fans only to reduce the moisture to levels safe for long-term storage. In the past, this meant turning on the fans and leaving them run, except when it was raining. I then pulled samples to monitor the moisture levels, so that I could decide when to stop the aeration phase. I have had acceptable results in the past, but not without challenges, including over-drying the bottoms and under-drying the tops of the bins. I have a five-cable monitoring system to check grain temperature to head off quality issues before they are a problem, but hot spots are always a concern, especially in the later summer months.

By using the Bullseye controller under these conditions, I was able to program the fan to run only when temperature and humidity conditions would remove moisture from the grain. This not only cut down my electric costs, but also gave me more uniform moisture throughout the grain column in the bin.

Because of the extremely slow dry-down time of certain varieties of corn, I decided to use my continuous-flow dryer to handle about 10,000 bu. of 25% moisture corn, which I put in my remaining 42-ft. bin. With the remaining 18,000 bu. of my corn in the 20 to 22% moisture range, I finished filling that bin, using the Bullseye’s capabilities to handle wetter grain by adding a small amount of heat when needed to reduce the relative humidity to increase the fan running time.

After the daily temperatures dropped to a 25° to 30° range, I set my controllers to storage mode. The moisture samples that I took in December from the bin that just used air was in the 14.5 to 15% range, and the air with low heat was in the 17.5 to 18% range.

Troyer from AgriDry contacted me about a service that I could add to my system to enhance the unit’s monitoring capabilities. It incorporates a satellite modem attached to the Bullseye to remotely monitor the grain temperature. Every night around midnight, a satellite receives a transmission from my facility that is downloaded to a server at AgriDry. Using that information, they e-mailed or texted me a daily report that included time, grain temperature, outside air temperature, and fan run time. In addition, the staff was available to answer any questions that I had. I found that AgriDry’s policy is to service their products after a sale.

In January 2009, I started to market my 2008 crop. Corn from the air-dried bin ranged from 14.5 to 15%, and the 22% corn had dried to around 17.5% moisture. I decided to use warmer spring air temperatures to finish the dry-down process. During the final dry-down process, I accidently turned off the fans. Because of the daily e-mail, I noticed that a sensor showed a temperature spike at the top of one of my bins. After inspecting the bin, I confirmed that the corn had started to go out of condition. If not for the Bullseye, it would have only taken a few days for my oversight to become very costly.

The 2009 harvest presented its own set of drying challenges, including immature, high-moisture crops combined with cold temperatures and high humidity. Because of these conditions, I started harvesting at higher moisture, beginning at around 29%. Due to an extremely wet and rainy October, almost all of my corn was harvested in November.

Because of a broken belt in the grain leg that takes the dry corn from our dryer, I decided to finish harvest by dumping some 19% corn on the top of my last bin. By using the Bullseye capabilities, I was able to lower the moisture in the top of the bin without over-drying the bottom. It was the slowest and the most costly corn-drying season I have ever had.

The 2010 corn harvest was one like I have never seen. The harvest started in early October and I never had a rain delay during the entire harvest. The crop was in beautiful condition, starting at around 18% moisture, so I bypassed my dryer and dumped our entire crop directly into the bins. By using the controllers, I was able to run my fans only when conditions were optimal, thus reducing electrical and overall maintenance costs.

AgriDry has designed the Bullseye to handle a wide variety of grains and is not only capable of removing moisture, but also adding moisture when needed. One situation would be if you harvest soybeans at 11% moisture. Normally you would give the elevator the 2% field loss, but with this technology you could safely bring the target moisture to 13% with minimal costs. With commodity prices at their current levels, it is more important than ever to capture and maintain as much value as economically possible.

By using the Bullseye system, I have been able to reduce my labor requirements, lower my energy costs, and maintain quality while reducing my storage risks. The net effect is a lower cost of production. While the Bullseye controller does not totally eliminate the need to manually check your grain bins, it will give you more confidence of the condition of your grain, and the end result is more money in your pocket.