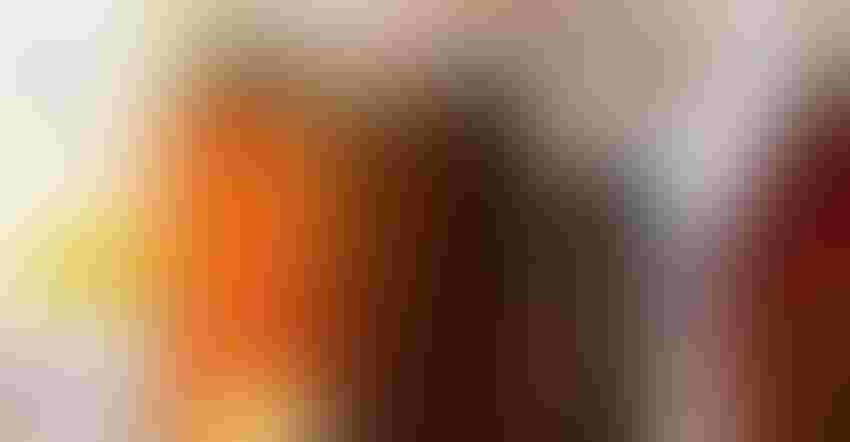 Jars filled with Texas honey. Production was expected to be below-average due to drought.Laura McKenzie, Texas AgriLife Extension

Texas honey production was expected to be below average this season due to the lack of soil moisture and extreme heat across the state, according to a Texas A&M AgriLife Extension Service expert.

Molly Keck, AgriLife Extension entomologist and Beekeeping 101 instructor, Bexar County, said major wildflower bloom periods in parts of the state were stunted by the lack of soil moisture and forage for bees, coupled with the early arrival of extreme heat.

“Some parts of the state received rain at the right time, but in most parts of the state bees did not have nectar to bring in and store for honey,” she said. “Rains over the last few months might result in a fall honey flow, which should be happening now, but we suspect honey production dropped again this year.”

Keck said an accurate assessment of Texas honey production is difficult, especially this year due to a lack of available information, but that official reports indicate production dipped in 2021.

In the Sept. 28 honey report, the USDA reported too little information was available to make an assessment of the 2022 season in Texas. Extreme heat and drought across the state was the primary reason for lack of activity and reporting, according to the report.

The report indicated truck availability was not an issue due to the lack of honey supplies. Keck said there were also fewer COVID-related issues, such as equipment and container shortages this season.

Keck said the strong sales of nucleus hives, or nucs, which are smaller hives consisting of a queen and worker bees that can build into production hives, is one good sign that Texas production was recovering.

“I think we’ve experienced two tough years for bees and beekeepers due to an extreme cold event in 2021 and extreme heat and drought this year,” she said. “Commercial producers are expecting to sell out of bees, so that is a good sign. Hopefully, they can bounce back, but so much will depend on beekeeper management through winter and rain going into spring.”

Hobbyists are backyard beekeepers who keep bees, typically less than 10 hives, to meet Texas’ agriculture exemption for property taxes and/or to produce honey for their household, to share and/or sell locally. Sideliners typically have 50-250 hives but also maintain a full-time job.

Keck said recent interest in hobbyist beekeeping increased due to COVID-19 and the use of hives to gain property tax exemptions for small land parcels.

The Texas Apiary Inspection Service only tracks beekeepers with 400 or more hives. Keck said the fact that hobbyists and sideliners may not participate in the reporting makes it difficult to estimate the total honey production statewide.

Commercial beekeepers keep 500 colonies or more. Their livelihoods depend on bee husbandry and moving large numbers of hives around the state and nation to pollinate crops and/or produce honey.

For example, a commercial producer in Texas may deliver hives to the Rio Grande Valley to pollinate watermelon fields before moving those same hives to the Texas Plains to pollinate cotton later in the growing season. Then during the dog days of summer, they may move their colonies to South Dakota or North Dakota for clover honey production.

“It takes year-round management of problems like varroa mites and making sure hives have enough food, but especially going into winter after a summer like this,” she said. “Beekeepers will close up the hives around Thanksgiving and open them back up around Valentine’s Day, and we can only hope we’ll be opening the hives up to better conditions for a spring bloom.”

Extreme drought conditions persisted. Soil moisture was very short. Some areas received a small amount of rainfall, and some reported a light frost. Nighttime temperatures were cooling off. Cool-season annuals were starting to emerge. Some wheat was planted. Rangeland and pasture conditions were very poor, and crop conditions were poor. Producers were providing supplemental feed to livestock. The monarch butterfly migration was active.

Conditions were dry, hot and windy. Rain was forecasted to accompany a cold front. Pastures were dried up, and wheat was planted with mixed reports on emergence. Most livestock diets were being supplemented with hay or feed. Hay supplies were tight. Cotton was continuing to open, but most fields in the area were being insured out and shredded.

Dry conditions continued. Most operations were on schedule, and many were getting soil sampling done and preparing for fertilizer applications. Seed supplies for spring wheat were low. Recently planted winter pastures of oats, wheat and ryegrass were in serious need of moisture. Fall armyworm pressure decreased. There was still some hay being baled, but a large portion of cattle producers were having to feed hay, and supplies were expected to be short. Livestock markets continued steady with weaned calves and cull cows. Early pecan harvest began with good yields, but small nut sizes.

More wheat planters were rolling with rain in the forecast. Compost was also being spread in fields before planting began. Cattle were in good condition.

While the weather remains mild and dry, the overall situation remains very dry, and moisture was desperately needed. Soil moisture levels were very short to short. Cotton was in several stages of maturity with some fields showing open bolls and some just starting. Cotton defoliation applications were underway, and harvest should begin over the next couple of weeks. Silage harvest was complete with average yields reported. Corn acres were close to harvest with some fields being sampled. Winter wheat plantings continued with early plantings being irrigated to prepare for stocker cattle. Rangeland and pasture conditions were very poor to poor.

Soil moisture was mostly short, as dry conditions and high winds continued. Temperatures were dropping. Hay harvest was winding down, and very little winter pasture had been planted due to drought. Wheat planting was active in anticipation of potential rainfall. Livestock conditions declined slightly, and sale prices were still decent with feeder cattle being the best market. Stock tanks and ponds improved from past rains, but they were still low.

A small cold front dropped nighttime temperatures into the low 40s with daytime temperatures in the low 60s before temperatures rose back into the 70s and 80s. There were a few showers reported as well. Most parts of the region received between trace amounts up to 2 inches of rain. Farmers were defoliating cotton and preparing turnrows for harvest, which should be short due to lack of production. Yields were anticipated to be about 30% of normal. Wheat plantings resumed now that moisture levels increased in areas. Most planted wheat had emerged but needed rain. Pecan orchards were being prepared for harvest, and Pawnee pecan harvest should begin soon. Most area producers were expecting good to excellent pecan quality and yields. Alfalfa and Sudan grass producers should have a final clipping before the first freeze. Irrigated pastures looked good, and rangelands looked fair and were showing good growth and grazing availability.

Scattered showers should help dry-planted wheat and cool-season grasses and forbs. Wheat was still being planted, and more producers were planning to plant. There were a few cotton fields that might make it to harvest. Limited water sources in pastures and limited grazing were concerning many producers who continued to cull herds and increased supplemental feeding.

Temperatures were cooler with a few showers reported. The rainfall was not enough to help exceptional drought conditions. Planting of winter pastures and small grains was halted due to the drought. Hay baling was mostly finished. Warmer temperatures and rain were in the forecast. Supplemental feeding continued as producers continued to sell off livestock. Livestock and wildlife were still in good condition.

Soil moisture levels in most areas were reported short to adequate. Some scattered rains delivered trace amounts up to 2 inches. Temperatures cooled. Peanut harvest was underway. A small number of cotton acres remained unharvested, and some defoliation was taking place. Strawberries were being planted. Sesame fields looked good. Citrus harvest continued, and sugarcane harvest should start soon. Row crop growers were preparing fields for the next planting. Vegetable producers were busy planting onions, cabbage and greens. There were still reports of fall armyworms. Rangeland and pasture conditions should improve with rain, but conditions were poor to fair. Cool-season forages were being planted for grazing and food plots. Some producers were waiting for more rain before they plant wheat and oats, and many were preparing fields for planting. Ranchers were making a final cutting of hay, and some were cutting and baling roadsides. Hay averaged $70 per round bale. Calf sales slowed over the past month due to improved grass production and lower prices.