Despite sagging commodity prices, pest problems, weather challenges, and a daily commute, Scott Irlbeck believes he did pick a fine time to come back to the family farm. 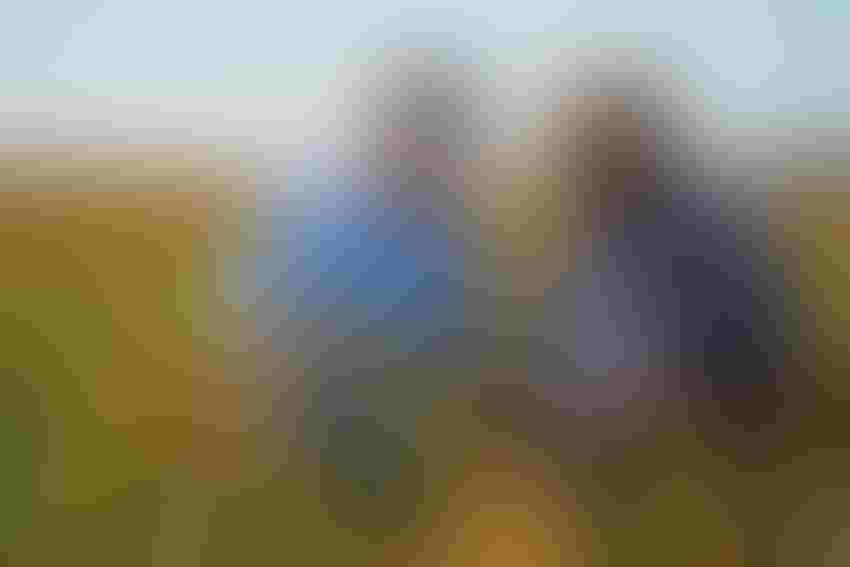 <p>Scott and Albert Irlbeck check for sugarcane aphids in grain sorghum on their Tulia, Texas, farm. Scott left a career in journalism last April to come back to the family farm.</p>

Scott Irlbeck picked a fine time to come back to the family farm: By last spring, record high grain prices were nothing but a fading memory, production costs were rising, the four-year drought had been washed out by one of the wettest springs in memory — along with hopes of getting wheat harvested and milo planted in a timely manner.

As if all that weren’t bad enough, a hailstorm ruined all but a few acres of wheat, herbicide-resistant weeds were beginning to show up, and a new pest, the sugarcane aphid, was on its way to making grain sorghum a much more expensive crop in the Texas High Plains.

He was senior editor for the office of the Vice President for Research at Texas Tech University. Since graduating from college, he has worked in journalism, including in the Texas Tech College of Agriculture and as a farm editor with a Lubbock television station.

So, one just has to ask Irlbeck, who left a job with a regular paycheck, insurance, and paid vacation to return to the family farm near Tulia, Texas: “What were you thinking?”

“It was time,” he says, on a warm, blustery day in the waning weeks of summer. “I had been thinking about it for some time.” He says he needed a change. “The job was okay, just not as exciting any more — and I wanted a change.”

The move back to the farm is a reversal for Scott. He grew up here, spent his summers plowing, but “burned out,” and after high school wanted to do something different. “I had always wanted to work in journalism,” he says. “I’d have regretted it if I hadn’t followed that dream. As a journalist, I developed a different perspective on life and the world. I’m glad I did all that.”

He’s glad for another reason: “I met my wife, Erica, through journalism.” They worked for competing TV stations for a while before each took different career paths. Erica is now a professor, teaching agricultural communications at Texas Tech. Of his return to the farm, Scott laughs, “She says I’m having a mid-life crisis.”

'I HAVE NO CALENDAR'

That crisis is coming with a bit of a learning curve. “It’s a different world,” he says. “At the university, everything was streamlined, every day was planned, my calendar was full. Here on the farm, I have no calendar.”

But, he says, his days are still full: scouting for aphids, checking for moisture stress, maintaining pipes for the furrow irrigation systems, prepping for harvest — duties that keep his days, if not his calendar, full.

Things have changed since he lived on the farm, Scott notes. “I’m 40 years old, and as far as modern agriculture is concerned, I’m way behind. I grew up here, but I wasn’t involved in the business side. I had no idea how much money it takes to get a crop started, or how expensive it is to protect that crop. Now, we have a lot of money in this crop — and the price is not that great.”

He says conditions, including weather and market, have to be almost perfect for farmers to make a profit. “A lot of conditions have to come together.”

Still, a few things have worked out this year for Scott and his father, Albert. They had good moisture to plant grain sorghum, and late winter/spring rains filled playa lakes that provided “cheap irrigation water,” Albert says.

A few problems came with the moisture. “For the first time since 2010,” Albert says, “we had a chance to make a good wheat crop. But then we got hail. Insurance zeroed out most of it. The best field made 14 bushels per acre; the rest made from 5 bushels to 8 bushels.” That contrasts to a good year, when wheat typically makes 20 bushels per acre — that’s dual purpose wheat, grazed and then cut for grain.

Then, dry conditions returned. “We got a few rains in June,” Scott says, “but then it turned dry. We need some rain.”

They were able to pull cheap water from those playa lakes, using old engines Albert has had for years. One engine, he says, is probably a 1954 model. Another could date back to the 1940s. “I’m glad Dad’s here to work with those engines,” Scott says. “I’m not as mechanically-minded as he is.”

Sugarcane aphids also created new troubles. “We didn’t see any at all last year,” Albert says, but by early September this year they had already made two applications of Transform insecticide to control the pest. “We hope we don’t have to spray again,” he says. “Some growers have already sprayed three times — infestations have been really bad.”

“That’s another big difference,” Scott says of his return to farming. “We didn’t use to have to spray so much. With early wet weather, weeds got big, and controlling them meant another cost.” Albert says, “We have to figure out ways to save on inputs.”

Scott says he’s learning a lot from his father about running the farm, and Albert says he’s glad to have his son back on the farm. “I’m 72,” he says, “and can’t do the things I used to do. I’m glad Scott’s back; I have no other help.” Scott says, ‘That’s a big part of why I wanted to come back — the timing was good.”

Albert was born in Tulia. He recalls that the first time he ever went to Lubbock was to enroll in Texas Tech, where he spent the next 4-1/2 years studying biotechnology. He spent some time with the National Guard, then “got a chance to rent some land,” and has been on the farm ever since. He remembers when the area got electricity, indoor plumbing, and telephones — a party line in the early 1950s.

Albert says he’s not looking to retire anytime soon; rather, he just plans to slow down a bit and turn a lot of the farm management over to Scott. “I don’t think I’d like retirement. I’ll help out where I’m needed. I still love it; I wake up every morning ready to go.”

“Dad does a lot,” says Scott, who sees his biggest challenge as not living on the farm. He has a 90-minute commute to the farm from Lubbock, where he and Erica live with their four-year old son, Jett. “I try to keep a schedule so I can be home to have dinner with them,” he says. Still, he may spend one or two nights a week on the farm. But, he says, “If I moved closer to the farm, Erica would then have a long commute.”

Scott likes the technology that wasn’t available when he was growing up on the farm and spending his summers plowing the fields. “Now, I’m not on a tractor seat all day, and that’s a good thing.”

He’s finding there a lot of good things about getting back to the farm. “I’ve found my new challenge. I get to work with Dad, and I see my mother, Jan, almost every day.”

He hopes to see commodity prices rebound a bit so they can get paid a tad more for their investment of capital and labor.

Scott and Albert think their grain sorghum will yield well, and they’re getting ready to prepare wheat acreage that they’ll lease out for stocker cattle. “Beef prices are still good,” Albert says.

In his return to farming, Scott says, there is also the satisfaction of carrying on family tradition and learning from a father who has experienced almost everything a High Plains farmer can endure.  He knows, given agriculture’s cycles, that sooner or later commodity prices will improve.

So, despite sagging commodity prices, pest problems, weather challenges, and a daily commute, Scott Irlbeck believes he did pick a fine time to come back to the family farm.