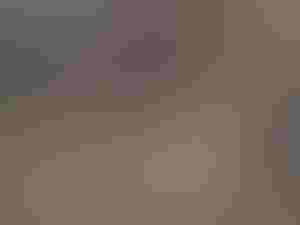 Timing corn emergence is key to minimize yield reductions, and can be more important for preserving yield than even seed spacing. When setting planting depth for corn this year, be sure to consider not just first emergence seen, but also how uniform the emergence is.

In work conducted from 2017-2019, we manipulated seeding depth to be approximately 1, 2, or 3” deep (current recommendations are for planting at 1.5-2 inches deep) in two conventionally tilled fields. One field had 2-3% organic matter, and the other had 4-5% organic matter. We tracked daily emergence in the plots, and measured stalk strength and yield at the end of the season. Across years and fields, shallow planting resulted in faster emergence of the first plants in each year.

However, the seeds that didn’t emerge were more subject to moisture fluctuation and took more time to go from 10% emerged to 90% emerged. In the high organic matter field, planting at 1” depth resulted in a 6-day period to go from 10% emerged to 90% emerged compared to the 2” and 3” depths which took 4 or 3 days, respectively. In the lower organic matter field, emergence was much more uniform (within 3 days for all treatments).

Temperatures above 86 F can dramatically reduce root elongation and seedling growth, and may help explain the differences between fields. There were more than 3 days on average during emergence where daily maximum soil temperatures exceeded 86 F at the 1” depth in the high organic matter field. Conversely, fewer than 2 days on average during emergence had maximum soil temperatures that exceeded 86 F on average at the 1” depth in the low organic matter field.

According to some field agronomists, shallow plantings increase stress and result in less developed roots, smaller stalk diameters, smaller ears and reduced yields. We did observe reduced stalk strength and saw poorer pollination of the base of ears when planting depth was 1” compared to 2” or 3”. A 9-10% yield reduction in the high organic matter field was observed with 1” planting compared to the deeper planted treatments. In the lower organic matter field where emergence was more uniform, yields were similar regardless of depth.

Improving our understanding of corn response to planting depth across different soil types and conditions may enable more effective use of planting technologies that allow variable planting depths during the planting operation.

Source: Ohio State University, which is solely responsible for the information provided and is wholly owned by the source. Informa Business Media and all its subsidiaries are not responsible for any of the content contained in this information asset.