Did the drought push you to bale or graze your corn stubble this fall? You may want to re-calculate your fertilizer rates. 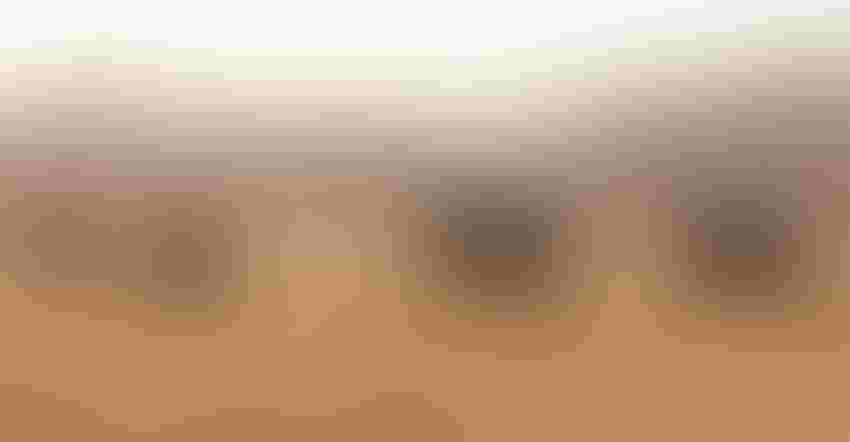 GRAZING FERTILITY: Drought had many cattle producers seeking opportunities to graze cattle on cornstalks, or to buy baled cornstalks to get them through the winter. But corn farmers should be mindful of what nutrients they may be losing by exporting those stalks from their fields and account for that in their fertility programs. Courtesy of K-State Research and Extension

Overwhelming drought had cattle producers looking for alternative feedstocks this fall as they prepared for winter. Many turned to grazing or baling cornstalks.

That’s all well and good for now, but don’t forget that you’re exporting nutrients off that field, experts say. And you’ll need to account for that in your future fertilizer rates.

McClure ran the numbers, and a 100-bushel corn crop would leave about 4,000 pounds of leaves, husks and stalk residue. “If we baled that 2 tons of residue and moved it off the field, we would be removing about $85 worth of nutrients per acre from the field,” he writes. That’s something to keep in mind when considering fertilizer purchases in this high-cost environment.

What if a farmer grazes those cornstalks? McClure writes that research from the University of Nebraska says a majority of those nutrients would be deposited back to the field in the form of manure. The data say only 1 to 2 pounds of nitrogen would be removed by grazing, and no phosphorus or potassium would be lost, he adds. Even better, a mineral supplement for cattle on stalks could actually deposit slightly more phosphorus onto the field than what would be grazed.

Keith Byerly is an agronomist for Mosaic in Bloomfield, Neb. He echoes McClure’s warning to corn growers that if they don’t usually cut silage or bale their stalks, they need to remember to calculate their fertilizer not just on the bushels of grain removed from the field, but also the biomass as well. Crop consultants, Extension agents and specialists can help them with that, he says.

Drought has its own effects on the corn plant, and on the field, Byerly says. Moisture is a key factor in cycling nutrients from corn stover back into the soil, where microbes and earthworms can make it available for the next crop. “Where we’ve been short on moisture, a lot of this plant residue is still sitting there fully loaded with potassium,” he adds. “It still has the nitrates in it.” He says potassium is probably the more mobile of the nutrients that is coming off of the fields in the form of corn stover.

Some other things to keep in mind:

Byerly adds that some of the early chopped corn may have had a cover crop planted, whether triticale or wheat or even rye in some areas.

“If that’s not what we’re normally doing, or maybe it’s a first- time experience for folks, we have to think about how those nutrients are cycling through our cover crops,” Byerly says. That, too, can change nutrient availability next spring as we terminate our covers and go back to a regular cash crop rotation, he says. Depending on when moisture comes back, there may be a lag in the nutrient cycling.

“So a grower that traditionally doesn’t put out a whole lot of nitrogen in the spring and does more side-dress stuff throughout the summer may have to think about adding some free or early nitrogen into that system to make up for the tie-up of nitrogen,” he says.

It’s good, Byerly adds, to talk to a trusted crop adviser about your specific field’s needs and what products are out there that may help you meet your goals.

Demand for feedstocks is great

The Dec. 9 Kansas Direct Hay Report from the Kansas Department of Agriculture Market News reported that demand for hay remains strong in the southwest and south-central regions of the state, where drought has persisted the longest.

Southwest Kansas feedyards reported they paid on average $257.75 per ton on Dec. 1 for alfalfa ground and delivered — that’s up $5.24 from November. Usage increased 14% from November as well.

The story in south-central Kansas feedlots is similar. Feedlots paid, on average, $244.29 per ton for alfalfa ground and delivered, which is up $40.21 from November. Usage decreased 24%, though.

“Compared to the last report, demand remained strong and prices were mostly steady, with some alfalfa strengthening in the southwest and south-central regions,” the report said. “Producers and brokers report there is a lot of hay moving. They continue to receive lots of calls from folks needing to purchase hay, however, most say that they are only moving hay to their regular customers.”

Large square bales of fair to good alfalfa are averaging $250 per ton, while premium in the same package is about $300 per ton in the state. In southwest Kansas, good to premium alfalfa in large square bales ranges from $285 to $350 per ton, depending on delivery and crop year.