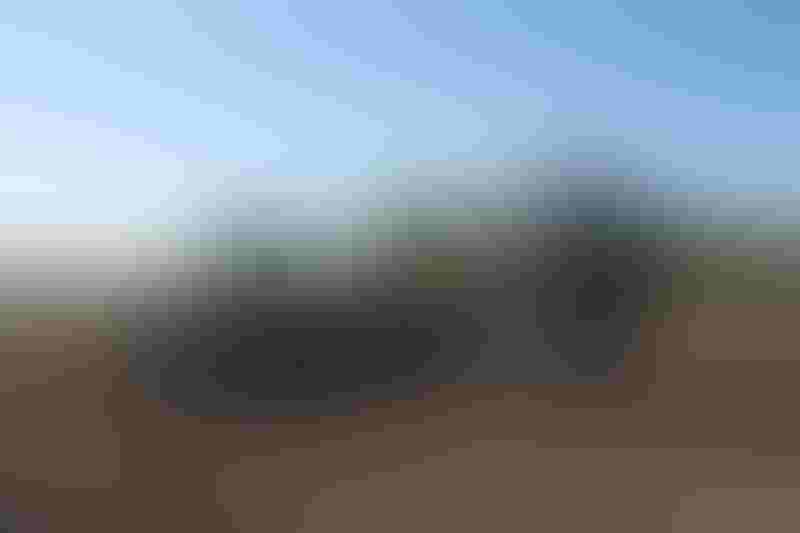 <p>John Haarstad&rsquo;s urea-sidedress bar can also be used as a deep bander by moving the row units 15 inches. Designed and built by Sheldon Stevermer, a Wells, Minn., farmer and B&amp;D Metalworks engineer, the 30-ft. bar extends to 40 and 45 ft. and pulls a Montag 9-ton steerable cart. The openers are Dawn 6000s. This is Haarstad&rsquo;s first year sidedressing. Based in Carlisle, Minn., he is skip-row sidedressing on 60-inch centers. Skip-row sidedressing is endorsed by the <a href="http://extension.cropsci.illinois.edu/handbook/pdfs/chapter09.pdf" target="_blank">University of Illinois</a> (pdf, page 15) because it avoids injecting N into a wheel track, where N losses can be greatest, and using a smaller tractor means less compaction.</p>

Wet weather across the Midwest has many farmers seeking answers about whether their pre-plant nitrogen is still available for the corn.

The application of nitrogen depends on the location and protocol for the soil or plants. Farmers should consider the pre-sidedress nitrate test to determine how much nitrogen is needed in the field or has been lost in the recent wet conditions.

The crop needs little nitrogen during early vegetative stages to about the fifth leaf development stage. The largest portion of the total nitrogen taken up by corn occurs during the eighth leaf to VT (tasseling) development stages. Nitrogen uptake is mostly done shortly after pollination. Thus, applying N before the V8 development stage is best. Research has shown that if applications are done around V6, it is very rare to see yield loss due to N stress.

However, due to late planting or replanting in some areas of the Corn Belt, there may be a limited window to sidedress. According to Greg Schwab, PhD., director of agronomy at Koch Agronomic Services, corn will grow faster than when it is planted in late April and early May due to the warmer temperatures creating the time crunch because corn will get too tall quicker.

Schwab’s best advice for producers when it comes to sidedressing nitrogen: “Do it quickly!”

There are several options to applying nitrogen even in the wet conditions this spring.

Schwab says using a product such as Agrotain can help farmers apply their nitrogen quicker. One suggestion is to knife in the UAN.

Injection into the soil or knifing the UAN in can be the best way to sidedress because this application can reduce volatilization of urea and protect the crop from foliar damage. If ammonia is used for the application, it is important to watch soil conditions to ensure that the knife track closes properly to avoid foliage damage by free ammonia escaping to the atmosphere.

“We like sidedress applications within three to six inches of the row,” says Darin Lickfeldt, Ph.D, senior technical development manager for Verdesian. “If you’re going to band it right on the row you can surface apply it, but if you are applying it between two rows, usually about 15 inches from the row, we like it knifed in one to two inches deep.”

An alternative to knifing nitrogen is to dribble it on the surface but then farmers have to be concerned about volatization loss.

When those two options are not viable then dry spreading may be the next alternative to consider. Often, sidedress units can be outfitted or already have a dry box attached.

However, producers must beware of the 4Rs of nutrient stewardship. They include using the right source, right rate, right time and right place.  Schwab recommends using a product like Agrotain to follow the 4R principle.

Lickfeldt agrees farmers also need to follow the 4Rs of nutrient stewardship to ensure their sidedress applications are as precise and efficient as possible. Lickfeldt recommends using a liquid fertilizer protected with NutriSphere-N, with about 25 percent to 50 percent of your total N applied in a sidedress at V6 to V8 growth stage and banded close to the row.

Schwab also recommends using a product like Agrotain to prevent volatization in the field. By using the dry box to broadcast nitrogen, producers can increase the amount of acres they are sidedressing by three or four times making it more efficient.

If your fields are still really wet, the worry exists that any fertilizer applied could still be lost. One recommendation is to use a nitrification inhibitor to help with the problem. It will keep nitrogen in the ammonium form then it will not be subject to the denitrification loss.

Schwab says the best advice for this year’s wet conditions is to use the nitrification inhibitor such as Agrotain Plus or Nitrapyrin, which is available in a product called Instinct from Dow. Another suggestion is to use the combination of products, Agrotain Plus, which can prevent nitrogen loss from volatilization, leaching and denitrification.

“If you apply untreated N and there is a prolonged period of two or three weeks with less than a half inch of rain, you can lose up to 25 percent to 50 percent of your applied N to volatilization,” says Ben Hushon, general manager of The Mill, which provides custom blending of liquid or dry fertilizers as well as custom application services to farmers in six counties along the Maryland and Pennsylvania line. “Soil type and soil moisture play a role in susceptibility to volatilization, and the form of N matters, as urea is more volatile than liquid urea ammonium nitrate (UAN), and ammonium sulfate is extremely stable.”

The University of Minnesota wants producers to keep in mind that the recent cool, wet weather has stressed the corn, particularly in early-planted corn, limiting water and nutrient uptake. As a result, a lot of corn looks nitrogen deficient at the moment. This does not necessarily mean the soil doesn’t have enough nitrogen. With a good stretch of warmer and sunnier weather coming our way, crop growth will resume, and the deficiency symptoms related purely to plant stress, rather than insufficient nitrogen in the root zone, should start to disappear.