&bull; Thomas, Jarrell developed a soil map for most of the 1,500 acre farming operation he operates with his father B.L. Jarrell.&bull; The map shows fields categorized as low, medium and high risk for developing damaging nematode populations.&bull; Using a simple off-on system developed by Clemson University researchers, he uses a simple variable rate application method to apply higher rates of nematicides in fields with higher risks of nematodes and applies less or none to fields with low risk of nematode damage. 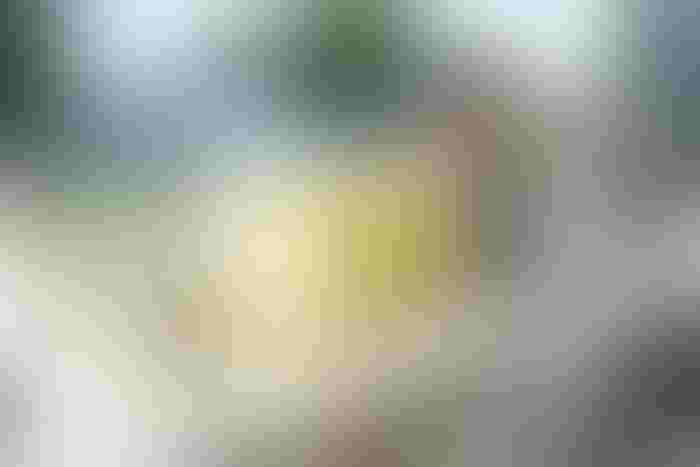 Estill, S.C., grower Doug Jarrell fights an ongoing battle with nematodes, losing too much yield, he says, to these microscopic critters that chew away at the root system of his cotton crop.

Working with peanut crop consultant James Thomas, Jarrell developed a soil map for most of the 1,500 acre farming operation he operates with his father B.L. Jarrell. The map shows fields categorized as low, medium and high risk for developing damaging nematode populations.

Using a simple off-on system developed by Clemson University researchers, he uses a simple variable rate application method to apply higher rates of nematicides in fields with higher risks of nematodes and applies less or none to fields with low risk of nematode damage.

In fields with high risk of damaging nematode populations, he uses Telone II a soil-applied fumigant. Even in fields with Telone, he says he still used the standard five pounds per acre of Temik.

The shortage of Temik this year has created a need to change his nematode strategy a bit. In previous years, he only used Telone on fields in the high risk category. This year he will put Telone under fields in both high and medium risk categories.

On his cotton fields without Temik, he will use Avicta CompletePak seed treatments and will apply in furrow applications of acephate (Orthene).

Jarrell says the nematode plan developed by James Thomas was right on target. “There is no doubt using Telone on our nematode hot spots paid off. We monitor nematode samples closely and you can see the results in lower populations and in higher cotton yields,” he says.

Crop rotation is another big factor in managing nematodes. “We started growing peanuts in 2004, and noticed cotton yields went up in fields following peanuts. We had always known we had a nematode problem, but this really demonstrated how much yield we were losing,” he adds.

“We see nematode numbers go down to nearly nothing after we plant a field in peanuts. However, neither one year of peanuts, Temik or Telone has noticeably reduced the number of nematodes over a long period of time.

“Nematode samples come back at zero or near zero right after peanuts, but by the time we plant another crop, populations build back up,” he says.

“In 2007, we started doing some Veris work with James Thomas. We started out using varying rates of potash and lime based on the soil maps generated by the Veris machine,” he adds

Clemson University Plant Pathologist John Mueller helped develop some of the nematode management strategies used by Thomas to help the Jarrells manage nematodes in their cotton.

Mueller says, “In our most recent tests, using variable rate application, we varied from zero Telone II to four gallons per acre in the same field. Without variable rate technology, the grower would typically treat for the highest nematode populations using the higher rate of nematicide across the entire field.

“As the nematode pressure goes up in a cotton field and the cost of pesticides goes up, the need for more precise application becomes increasingly cost effective, Mueller says.

“In one field with variable soils and subsequently variable nematode pressure, we increased yield by 55 pounds of lint per acre. But, we only averaged one half gallon of Telone II per acre, versus the standard uniform treatment of three gallons per acre. So, we saved $25 per acre on Telone II costs plus another $25 or so on increased lint yield.

“It is affordable technology that can put money in a grower’s pocket,” Mueller concludes.

Veris measures the electric conductivity of the soil. In heavier soils, there is more conductivity and less in sandy soils. Jarrell says they had the Veris maps and Thomas encouraged them to use the maps to develop a simple variable rate strategy for nematode management.

“James started doing nematode sampling for us and it was a logical decision to use the Veris maps and soil sampling to determine where high levels of nematodes were most likely to occur. That’s when we started using Telone on fields with the highest risk of nematode damage.

“We are very concerned about the loss of Temik. While Temik wouldn’t take care of nematodes in some of our fields — the ones with high risk ratings — it did a good job on medium and low level risk fields.

“Now, with no Temik, we feel like we don’t have a choice other than increasing our use of Telone on these cotton fields at medium risk,” Jarrett says.

“There is no question that Telone is difficult to apply, it’s costly ($40-45 per acre), it’s more time you have to spend to get it applied right and you have to be real cautious with it,” he notes.

“However, when you run the picker through the cotton field and you see 200-300 pounds more cotton, it makes it all worthwhile.

Quick math backs up that assertion — 300 pounds of cotton is worth over $300 on today’s market. For a $45 per acre investment, Telone is sure to be a good economical decision, if you know nematode populations are high.

Jarrell’s father says like most farmers they missed a few spots with Telone, and the results are easy to see. “You can see it to the row where we didn’t apply Telone in some of these sandier fields,” he adds.

The Temik shortage has forced Jarrett to use all he could find in his cotton and to use Thimet under peanuts. This product may cause phytotoxicity, particularly under cool wet conditions and should not be used following diuron-containing herbicides such as Karmex and Direx.

For cotton and peanut growers, like the Jarrells, that could be a challenge, because diuron is an integral piece of the puzzle in managing glyphosate resistant weeds.

With Temik and seed treatments dominating the market for the past decade or more Thimet has not been evaluated in recent years. If a producer elects to use it, North Carolina State University Entomologist Jack Bachelor says trying it on limited acreage in 2011 may be a good idea.

While Temik has been used extensively for thrips control and for managing low to medium populations of nematodes, Thimet does not provide control of nematodes.

Though nematode tolerant varieties, especially Phytogen 367, have performed well in some areas of the Southeast, Jarrell says he is a hard-core Deltapine man. “The DPL seed we get has always done a good job for us”. That said, the South Carolina grower says he will likely grow a few acres of Phytogen 367 on some of nematode infested cotton land in 2011 — in part due to the lack of Temik.

“Everybody is going to have to figure out what to do without Temik. We were expecting it to be gone in a few years, but not this year.

“It’s all a part of being more efficient with everything you do on the farm. The crops are more valuable than they have ever been and the cost to produce these crops is higher than ever, so anything you can do to get more out of every row of a crop is going to pay off more than ever,” Jarrell concludes.