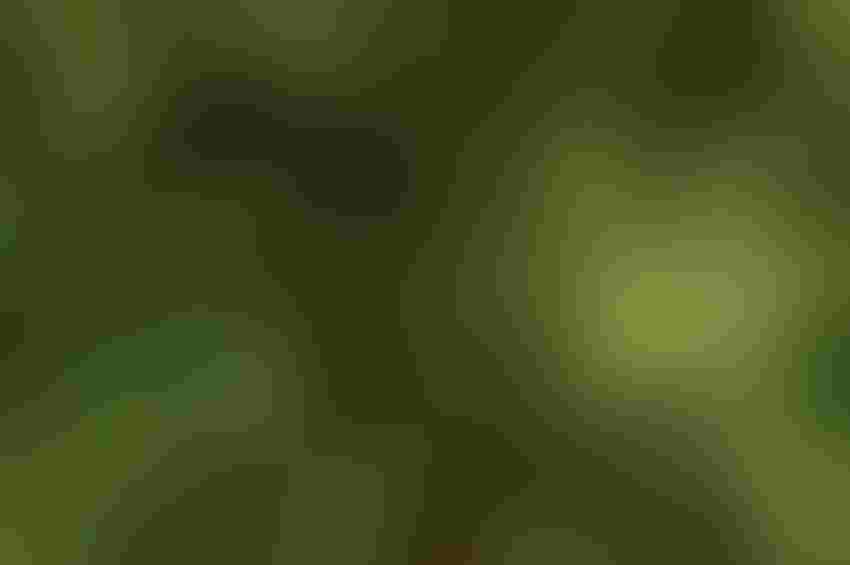 He discussed the nematode factor and peanut best management practices by Skype hookup during the recent Red River Crops Conference at Altus, Okla., as well as disease issues, varieties, and market types.

“We learned in 2015 that cotton nematode infestations result in non-uniform stands, galls on the roots, poor plant growth, and inability of roots to pick up water and nutrients,” Woodward says. “On peanuts, we see similar symptoms, including chlorosis, poor growth, soil adhering to the roots, and symptoms developing on the pods.”

Delayed emergence was not uncommon last spring, he says. “In some cases, emergence was delayed until three to four weeks after planting. That affects uniformity and maturity of the harvested crop.”

The combination of cool, wet conditions and poor seed quality, in some cases, created stand problems. “Overall, I was happy with our seed quality,” Woodward says, “but growers need to make certain they get high quality seed.”

Peanut farmers also dealt with increased weed pressure last year, he says. “We saw early and frequent flushes of weeds. Lack of preemergent herbicide activity, and an inability to get overlapping residuals applied, contributed to weed problems. It is important to start clean.”

Wet conditions late in the season delayed peanut harvest. “Rainfall resulted in harvest losses and pods left on the ground. In some cases, minimal adjustment to the combine will help prevent those losses.”

Growers reported a few Seg II peanuts, he says. “It was a limited, sporadic occurrence and we could not identify the cause.”

Peanut disease pressure in the Southwest is typically not as severe in the Southeast and Virginia/Carolina production regions, Woodward says. But it does happen. Foliar diseases, early and late leaf spot, and web blotch are not as common because of the lower humidity in the Southwest. “Soilborne pathogens — nematodes, pod rot, and southern blight — are more troublesome. They occur underground, where moisture is more available. Cylindricladium black rot (CBR) and tomato spotted wilt virus (TSWV) are not usual occurrences.”

Disease identification is important, he says. Web blotch, for instance, resembles leaf spot, but is not observed on the bottom of the leaf. Leaf spot is visible on tops and bottoms of leaves. Southern blight “possibly will cause significant yield loss,” Woodward says. “The subterranean phase is more damaging.” Identification may be tricky. “We see a subtle difference between southern blight and Sclerotinia, which may be the most damaging disease in Texas peanuts, also in parts of Oklahoma.”

Fungicide options include Omega, Endura, and ProPulse. “Omega and Endura are the go-to standards,” he says

Verticillium wilt poses significant problems when it shows up. “It is more likely under intense irrigation, and we have no fungicide available to control it, although we do see some minor tolerance differences among varieties. Cool, wet conditions late in the season may encourage Verticillium wilt.”

Pythium pod rot results in wet and spongy pods, he says. “Diagnosis is hard to make in the field, and may require lab tests to differentiate from Rhizoctonia, which has a darker pigment that shows up in a lab culture. We can deal with both of these pathogens with proper identification.”

Abound is the “commercial standard” for pod rot management, he says. “A number of generic fungicides are also available, but we recommend Abound.”

Woodward says the Southwest has seen a market type production shift over the last few years, away from runner peanuts to more Virginias. Latest estimates show runners taking 27 percent of the acreage, followed by Spanish types at 25 percent. Virginias have moved ahead, with 33 percent of planted acreage.

Southwest producers also grow a few Valencia peanuts, but that market has declined in recent years. “I see some growth potential for Valencias, and hope to see some new interest,” he says. A new runner/Spanish peanut type is a runner peanut with seed size closer to Spanish characteristics, but lacking the yield potential of runners.

“We also have some promising breeding lines with Virginia and runner type peanuts,” he says. Runner yield potential typically tops other market types, but he says, some growers are closing in on runner yields with Virginia varieties and may see premiums for in-shell peanuts.