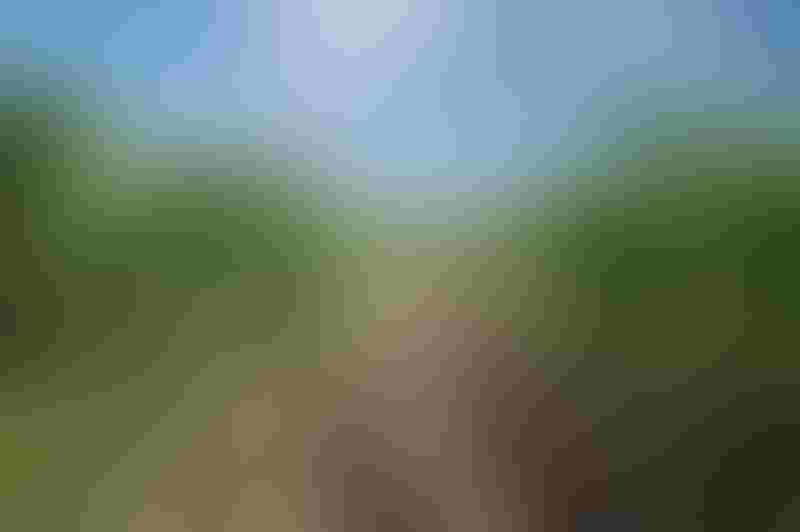 Your underground, invisible soil microbes eat one another and, over time, condense soil nitrogen into plant-available form. No-till soils have a better soil structure, allowing predator–prey interactions to rapidly release nitrogen taken up by soil microbes. The soil structure reaches peak performance in about six years, explains Jill Clapperton, root-zone scientist and principal of Rhizoterra, Spokane, Wash. “This is what nitrogen-use efficiency is all about: the predator-prey interaction at work.”

“This happens because no-till soil uses nitrogen more efficiently, thanks to the diverse soil organisms,” says Franzen, who documented this soil efficiency boost. He changed North Dakota's MRTN recommendations accordingly. “After about six years . . . you double the amount of microbes there, and they are more diverse,” he says.

“When you apply nitrogen, it’s used by microorganisms; they slime and they poop, so it’s in a more organic (carbon-intensive) form for a longer time, acting like a slow-release nitrogen. Only in those situations do you get this enhanced biology and nitrogen efficiency.”

Your soil microbes “are truly a recycling system,” Clapperton says. “These protozoa, collembola, mites, insects and nematodes hum along efficiently.” This is why the research cites six years of continuous no-till, she notes. “The cycle concentrates microbe wastes, and crop residue components into soil organic matter. That becomes your bank, saving extra fuel (carbon) in the organic matter. You can live off the interest of surplus carbon recycled by these microbes.”

“Your underground microscopic livestock live on carbon,” she says. “But not just any carbon: The coarser fraction of carbon—the active carbon—has soil pore spaces, or soil highways for water, nutrients and air. No-till protects this heavy fraction of soil organic carbon from being used by microbes. That means more carbon and nitrogen recycling by tiny predators, leading to greater nitrogen efficiency.

“To reach this level of nitrogen-use efficiency, you need the buildup of particulate organic matter, which is more associated with aggregates and is protected from microbial activity,” she adds.

“Microbial biomass carbon is also the most responsive indicator of nitrogen-management efficiency. Otherwise, microbes use the most available carbon form and then immobilize nitrogen. Tillage exposes the aggregate-protected carbon to microbial attack, and this would use up, or immobilize, nitrogen.

How to get there

“Everyone’s trying to get a glimpse of soil’s productive capacity, and we all know that what we do affects our capacity to recycle, along with the weather and the temperature,” Clapperton says. “The Haney Test, for example, is one indicator of a soil’s capacity to recycle crop residue into nutrients, and of its microbial activity.

“Soil organic matter holds onto nitrates, ammonium sulfate, calcium and other nutrients. This organic matter ‘sponge’ is a porous lattice snagging minerals and nutrients before they can be leached from the soil,” she says.

“Everything we do has a consequence, and sometimes a consequence is delayed,” Clapperton says. “For example, dry weather delays soil-residue recycling, and wet weather accelerates it. So it could take six years for your soil microbes to break down enough residue and store the carbon as soil organic matter in your soil.

“This is the same mechanism that changes or improves your soil texture,” Clapperton adds. This been documented by Ohio State University on Dave Brandt’s farm in Carroll, Ohio. “Cover crops, intercropping and a diverse crop or cover crop rotation can accelerate this process.

“But this is a system, and a system doesn’t like to be disturbed.”

A new way to look at nitrogen needs

According to North Dakota’s latest soil fertility recommendations, long-term, no-tilled corn needs about 36-100 fewer lbs. nitrogen per acre to reach maximum return to nitrogen (MRTN) than conventionally tilled soil. The MRTN is the economic threshold where adding more N no longer pays for itself in increased yield. (See  (http://bit.ly/FranzenNDSU)

It’s more efficient at using nitrogen. This is based on data from 77 North Dakota nitrogen-rate trials from 2010 to 2013, plus additional data from northwestern Minnesota, southern Manitoba and northern South Dakota counties dating back to the 1970s.