&bull; Three years ago Tommy Henderson took a leap of faith and made a drastic change in his farming operation.&bull; With encouragement from the USDA&rsquo;s Natural Resource Conservation Service (NRCS) and other sources, he became a no-till farmer.&bull; Three years of minimum-till, followed by three years of no-till has resulted in significant improvement in the soil health in his fields. 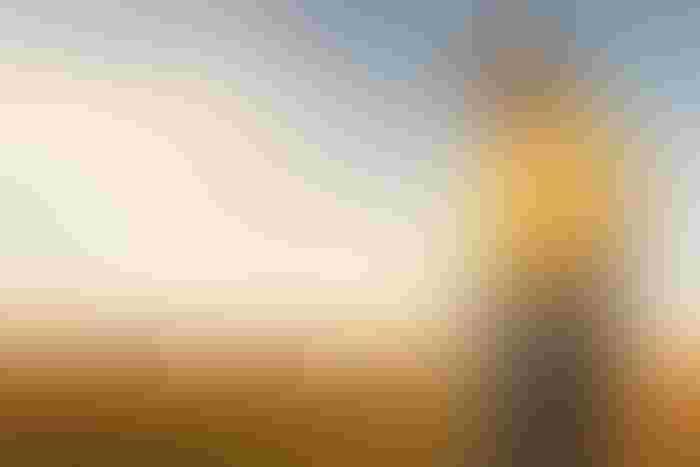 <p> DESPITE RECEIVING only 50 percent of his average annual rainfall, dryland wheat farmer Tommy Henderson&#39;s wheat crop is thriving thanks to three years of no-till and the cover crops he planted this past summer.</p>

Clay County, Texas farmer Tommy Henderson may not know everything about farming, but he’s got more than the basics covered.

Drought. Got it covered.

Excessive heat. Got it covered.

High winds. Got it covered.

In the middle of one of the worst ongoing droughts in Texas history, how can Henderson remain so optimistic about his dryland winter wheat crop?

Because he’s got it covered.

Over the last two years Henderson has only received half of the average annual rainfall that would water his crops.

“Yeah, I need rain,” he admits, but then looking across the fence line adds, “But I think my neighbors need it a little worse than I do.”
Change on the horizon
On this December morning a breeze gusting through the Red River Valley swirls dust as it blows across the neighboring land. His neighbors are conventional farmers, plowing their fields over many times to prepare a seedbed for their wheat crop.

With less than an inch of rain falling since the beginning of October, many wheat crops in the area are beginning to fail.

Not Henderson’s. Three years ago he took a leap of faith and made a drastic change in his farming operation. With encouragement from the USDA’s Natural Resource Conservation Service (NRCS) and other sources, he became a no-till farmer.

This meant instead of spending countless hours on the tractor plowing his land multiple times, Henderson would now only make one trip to plant the seeds with special no-till equipment and one trip to fertilize.

Because of his history of conservation efforts on his land, Henderson was awarded a Conservation Stewardship Program (CSP) contract from NRCS in 2009. This provided him with some financial assistance that made it feasible for him to purchase the no-till equipment.

“Going no-till has changed my life,” he says. “My wife is a school teacher and I actually have time to go on vacations with her in the summer now.”

Six years ago Henderson began plowing, or tilling, his land as minimally as possible. Three years of minimum-till, followed by three years of no-till has resulted in significant improvement in the soil health in his fields, according to Henderson.

The root of his plan

As the NRCS saying goes, ‘Healthy soil is productive soil.’ Henderson’s three years of no-till management, which leaves the previous crop’s plant residue in the field, has already improved the soil structure on even his hardest clay soils, making it easy for plant roots to penetrate deep and find new moisture and nutrient layers to keep them alive.

Always interested in the relationship between soil health and plant production, Henderson obtained a degree in agronomy from Texas A&M in 1975. He became a full time farmer near his home town of Byers, Texas that same year and has been a continuous student of the land ever since.

After researching and attending several workshops on ways to improve soil health, Henderson took another leap of faith and made an additional change in his farm management program this year: he planted summer cover crops.

“I planted guar beans and sesame in my wheat fields this summer,” he says. “I wanted to plant something that would shade my soil and also be a cash crop I could hopefully harvest.”

With Henderson’s farm straddling HWY 79, a major thoroughfare from Wichita Falls, Texas, to Waurika, Okla., the unusual crops attracted quite a bit of attention and generated a lot of talk in the local coffee shops.

“I am always willing try something I believe in,” Henderson says. “But it’s usually different than what everyone else is doing, so that’s why I’m so glad to have my farming buddy Dewayne Davis along side of me doing the no-till and cover crops on his place. It’s always easier, mentally, for two people to do something like this.”

Henderson says he chose these particular crops for their ability to leave nitrogen in the soil after they are harvested.

Over time, the plant residue in the field turns into nutrient-rich organic matter in the soil and the plants’ roots loosen the soil, allowing for deeper soil moisture and improved biological activity in the soil.

Carbon and nitrogen are two of the dominant nutrients farmers monitor in their fields. Crops are reliant on a proper balance of these nutrients to produce the best yields.

NRCS recommends an ideal carbon to nitrogen ratio of 24:1. Wheat stubble left in the field produces a carbon-to-nitrogen ration of 80:1. Thus, nitrogen has to be added to the soil to bring the ration back in balance. Cover crops in combination with no-till farming seldom require additional nitrogen to reach the ideal C:N ratio.

“In the past I have had to buy nitrogen to add to the soil,” he says. “But now, with legume crops like the guar beans, sesame seeds, cow peas and some others that have an 8:1 carbon-to-nitrogen ratio, I can essentially grow my own nitrogen.

“That is a big savings in itself,” he emphasizes.

Made in the shade

Henderson says many farmers are hesitant to plant a summer crop in the middle of a dry spell.

“Hot, dry weather is exactly why you would want to plant a summer cover crop — to protect your soil,” he says.

Henderson explains that good soil bacteria and microorganisms that feed the plants die when soil temperatures get above 130 degrees.

“In this part of the country, it gets 114 or higher nearly every summer,” Henderson says. “That means the soil is 150 degrees and you have just killed your soil microorganism community.

“On a hot summer day, would you rather be sitting outside in the glaring sun or under the shade of a tree?” he asks.

“Soil is the same way, and every time you plow up the soil, you are exposing a greater surface area to the elements,” he says.

“The leaves of the plant shade the soil and keep the moisture from evaporating,” Henderson says. “Then the roots of the plant provide avenues for any rainfall we do get to travel deep in the soil.”

Henderson only considers drought-tolerant varieties for his summer crops. While his crops this summer did use some of the moisture in the soil, Henderson says in the end they helped the soil retain more moisture than it could have without the crop.

Henderson carries a soil pressure probe with him to test how hard the ground is and check soil moisture. Loose, mellow soils allow plant roots to keep reaching down to find moisture. Hard, compacted soil, such as that found 8-12 inches below plowed ground, prevents roots from accessing soil moisture and nutrients at great depths, forcing them to rely strictly on rainfall and applied fertilizers.

On his no-till fields, he is able to insert the entire two-foot probe in the ground. Soil moisture is evident immediately below the surface, with greater moisture at greater depths.

As a comparison, he walks over to the wheat field of his neighbor’s, a friend of his, and does the same thing. The soil is so dry and compacted the probe can’t penetrate the surface, even with Henderson applying all his weight on it.

“This neighbor has seen the difference in our fields,” Henderson says, smiling. “He’s switching to no-till next year.”

Cashing in on the benefits

Henderson was able to harvest the seed from his sesame crop for a profit, with just a few modifications on a wheat combine, leaving the residue in the field.

Lack of moisture prevented the guar beans from making a crop, but that didn’t discourage him at all.

“The plants grew and did their job to protect and improve the soil,” Henderson says. “But we just didn’t get enough rain to have a seed harvest.

“Normally it would have really bothered me to not make a crop,” he says. “But now I’m beginning to think a cover crop is well worth the soil benefits it provides, even if you don’t get a harvest.

“I’ve already saved money in my nitrogen bill,” he continues. “And you can’t buy rain, so the fact the cover crop is why my wheat crop has access to moisture in the middle of a drought is a big deal.”

No — Henderson can’t buy rain, even when he needs it most. But he is doing everything he can to preserve soil moisture and keep producing crops despite lack of rainfall.

His soil might remain under cover, but his success with cover crops won’t. Thanks to Henderson and others like him, this new under-cover operation is gaining a lot of public attention.