Why corn is susceptible to breakage in these growth stages. 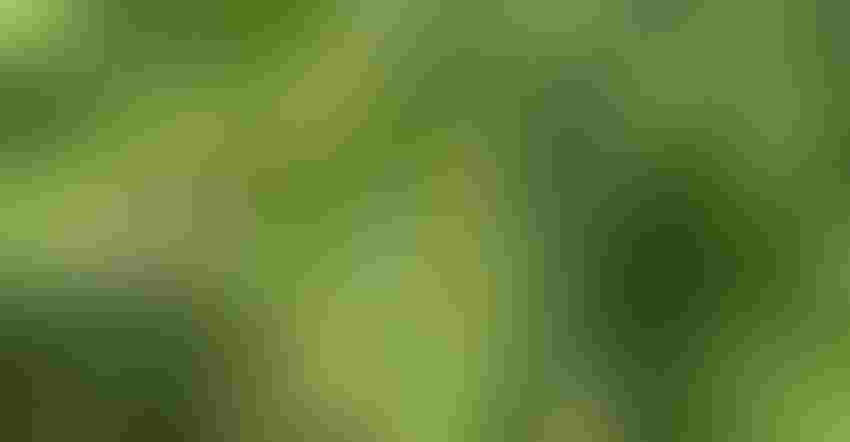 WHY NOW? Corn in about the V12 stage of growth couldn’t stand up to high winds that occurred in a thunderstorm.

Green snap — the breakage of corn stems by high winds — usually occurs at some specific growth stages of corn. Here’s why:

• V5. A corn plant at V5 (five visible leaf collars) is entering a period of rapid change. The growing point is just emerging above the soil, making the plant vulnerable to damage. The nodal root system is beginning to expand rapidly, greatly increasing the plant’s ability to take up water and nutrients to support accelerated plant growth. Rapid leaf and stalk growth follows this root system expansion. Stalk growth occurs by elongation of internode cells, which increases the rigidity of the stalk. Cell walls are extremely fragile at this rapid-growth stage, and stalk tissues are at a greater risk of brittleness compared to other growth stages.

• V5-V8. Many nodes and internodes are arranged together in a small area. This dense concentration may make the plants less flexible and more susceptible to breakage. Brittle snap at this stage often follows a surge in corn growth and development stimulated by favorable rainfall and temperature.

Breakage occurs below the growing point, at a stalk node at or near the soil surface. Snapped plants will not recover, nor contribute appreciably to yield. Tillers may emerge in subsequent weeks, but in most cases will not set harvestable grain, even though they may resemble a small cornstalk. Impact on yield will vary according to severity of stand reduction and subsequent growing conditions.

Yield reduction from brittle snap at the V5 to V8 stage is often less than that occurring when plants are snapped near the tassel stage. One reason may be that remaining plants have more time and resources (sunlight, nutrients and moisture) to compensate for lost stand when injury occurs earlier in the growing season.

• V12 through tasseling. The corn plant is undergoing its most rapid stage of growth. It will increase in size from 3 feet to its mature height of 7 to 10 feet in approximately 21 to 28 days, or about 2 to 4 inches of growth per day. A key factor increasing the incidence of brittle snap at this stage is the enlargement in leaf surface area and plant height, which increases wind resistance during a period of potentially severe thunderstorms and wind events (late June, July or early August, depending on the planting date and growing season).

The most common sites for breakage at this stage are at the nodes — immediately below, at or above the primary ear node. Plants snapped at this stage often have visible ear shoots on the stalk shortly after the wind damage event. However, the severely reduced leaf surface area usually results in limited or no grain production on injured plants. Upon reaching mature height, the risk of brittle snap diminishes as cell walls are strengthened by the deposition of lignin and other structural materials.

Thunderstorms in early morning hours when temperatures are cooler may cause more green snap than thunderstorms during the heat of the day, since plant cells are more turgid early in the morning and stalks less able to bend without breaking.

Dry, firm soil that tightly anchors the crown and roots of the plant at this time also may result in increased breakage. In the same way, strong-rooted hybrids may incur more damage if the plant is prevented from "giving" at the base. — DuPont Pioneer.