Some farmers find payoff with intense scouting and pest management. 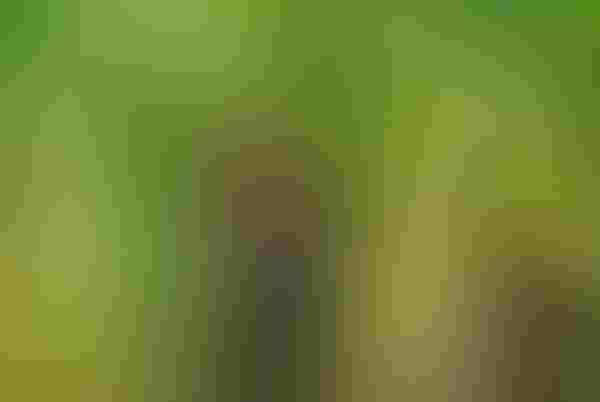 Carter Charles manages insects and weeds in his corn fields near Cyrus, Minn., without the benefit of genetically modified seeds.

This is the third season he’s planted all conventional corn hybrids. Charles’ cropping strategy is a response to two developments on his farm: growing problems with glyphosate-resistant weeds and declining populations of corn rootworms and corn borers. In 2012, this approach put an extra $46/acre on his bottom line. “It’s not for everybody,” says Charles, who grows 900 acres of corn, soybeans and sunflowers and also runs an aerial crop-spraying business, “but this is working for me.”

After a decade of embracing biotech corn, Charles started questioning the need to keep using herbicide and Bt traits in his operation.

“My problem was that Roundup wasn’t killing my weeds, especially lambsquarters and waterhemp,” (the result of years of a Roundup-only herbicide program on every acre). “If I have to go to conventional herbicides, why am I paying for the technology to use Roundup?

“The other indicator was that my non-Bt refuge corn consistently yielded 6-8 bu. better than my Bt corn, even without insecticide. And it was one or two points drier at harvest. Also, my beetle counts were low, and I didn’t notice any lodging when I combined.”

With encouragement from his agronomist, Luke Griffith, Morris, Minn., Charles planted more conventional alternatives. Now, instead of using triple-stack corn to control pests, he relies on crop rotation, soil-applied insecticide, increased scouting and intensified weed management. “I’m saving a lot of money on seed, and putting it into machinery instead.”

Charles isn’t alone, says Agronomist Dorian Gatchell, Minnesota Agricultural Services, Granite Falls, Minn. In response to a lot of questions about this from growers, Gatchell ran some economic comparisons of conventional and traited corn from his clients’ 2012 fields. Returns on conventional corn were equal to or better than GM-corn, when corn followed soybeans, he says. “No one trait package was considerably better than the others.” Rather, “It is the genetics and the management of those genetics that make yield. Any differences can probably be attributed to differences in management.”

Still, few growers are choosing to forgo traits entirely, as Charles has.

Genetically modified seeds accounted for almost 90% of corn plantings in 2012, while Bt hybrids were planted on two of every three U.S. corn acres. A 2012 study by the USDA Economic Research Service concluded, “Bt adoption is associated with increased profits and yields.” In 2010, for example, Bt-corn boosted yields by an average of 26 bu./acre and profits by about $118/acre, the USDA reports.

Demand for Bt corn continues to strengthen, says Tim Bratland, product manager for Legend Seeds, DeSmet, S.D. At the same time, demand for non-GM corn is up in parts of the northwestern Corn Belt, where marginal land, such as former grassland, is being put into corn production. On that less productive ground, “Growers don’t want to spend extra money.”

To assure a strong early root system on his non-Bt corn, Charles applies 6.5 oz./acre of the insecticide Capture LFR in the seed furrow along with his starter fertilizer. Keep in mind that if corn rootworm populations are low, an insecticide application at planting won’t earn a return, warns Entomologist Bruce Potter, University of Minnesota Extension IPM specialist. But Charles considers a soil insecticide a fairly cheap risk-management strategy. Scouting last August, “I couldn’t find any corn rootworm beetles in the majority of Carter’s fields,” Griffith says.

Widespread use of Bt-corn has pushed down corn borer populations and lowered the overall threat from this insect, which also benefits conventional crops, Potter says. Indeed, “The trait is so effective that it lessens the economic benefit of using it.”

After Charles switched to non-traited corn, he diversified his herbicide program. In 2012, he applied TripleFLEX pre-emergence, followed by Laudis post-emergence. This chemistry – which is also effective on Roundup corn – supplies four modes of action for good control of waterhemp, lambsquarters, giant ragweed and kochia, Charles’ top weeds, Griffith says.

Charles’ 2012 corn yields averaged 185-200 bu./acre – comparable to triple-stack corn yields in the region, Griffith says. Charles spent $140/bag on seed, about half the cost of triple-stack seed. Even after extra insecticide and herbicide expenses, he cut his cost of production by nearly $50/acre without sacrificing yield, he says.

In much of the Corn Belt, rotation is still a simple but effective way to control corn rootworms, says Potter, the Minnesota entomologist. Even on heavily infested ground, taking the field out of corn for a year “eliminates western corn rootworms completely in that field. The following year, you should be able to plant non-Bt-RW corn without insecticide.”

However, there are some situations where a two-year rotation is not effective for controlling corn rootworms:

Northern corn rootworms, which developed extended diapause, have become less common, Potter says, so growers in the northern rootworms’ historic range can again use crop rotation to manage the pest.

Is conventional corn a good fit for you?

Here are some of the questions he asks growers:

Jeff Schwartz, Wood Lake, Minn., is a beginning farmer. Lower cost conventional corn is a good fit for his small operation of 160 acres, he says, although he plants some Bt corn, too. “The savings on seed is quite a bit, and I’m trying to find ways to keep a small farm competitive.” Although he works off the farm, “I can handle a more labor-intensive crop.”

“If you’re in an area where Bt resistance has been confirmed, or if you’re worried that the trait isn’t performing as well as it used to, rotate to another crop.” In the corn year, he suggests planting a non-Bt hybrid with a soil-applied insecticide, or switching to a hybrid with pyramided Bt traits.

“Most important, adopt a longer-term management strategy, rather than relying on the same practice year after year,” Gray says.