Corn Watch: What comes after insect damage may do more harm than the insects themselves. 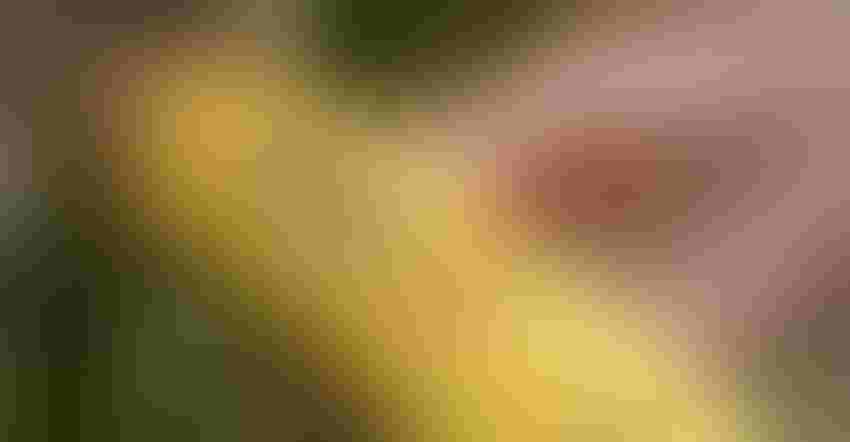 DISEASE MOVES IN: Bird or insect damage only affects a small percentage of the ear. But the secondary disease infections that enter via those wounds can cause much more damage.

Walking through the Corn Watch ’17 field during grain fill, Dave Nanda found an ear here and there where one side was exposed with few husks covering it. Call it a fluke or an oddity — that discovery alone isn’t a big deal. What is more concerning is that either birds or insects or both have an easier time feeding on the ear if it’s exposed and not protected by husks.

Nanda, an independent crops consultant in Indianapolis, says it’s not even the insect or bird damage that is cause for alarm. It’s the secondary infections that can follow and get established in the field that are worth worrying about. Since this situation was found in the Corn Watch ’17 field, you might want to look for it in your own fields. Corn Watch ’17 is sponsored by Seed Genetics-Direct, Washington Court House, Ohio.

Here are some more specific feeding issues to watch for in your fields:

• Birds. Birds usually don’t damage enough ears to be an issue, Nanda says. However, in some hybrids, ear tips are exposed more than in others. Birds are likely to peck and damage kernels that are exposed and not covered by husks. While birds may only destroy a few kernels per ear, the remains of these kernels are prime targets for fungal infections and diseases that cause ear rot. It’s the secondary infection from the disease that can spread across the ear and do far more damage than the bird feeding.

• Western bean cutworm. Several reports have already surfaced in the eastern Corn Belt about issues with western bean cutworm larvae this year. The problem with this insect, note agronomists who prepared the Purdue University Corn and Soybean Field Guide, is that it often makes multiple holes in a single ear, not just one hole. The more holes made by insects chewing through corncobs, the more potential entry points for disease there are available.

• Corn earworm. This larva can take on a multitude if colors. Look for the double dorsal dark line down the back of its body. This insect larva prefers feeding around the tip, where the western bean cutworm isn’t bashful — it will bore virtually anywhere on the ear. If 5% of plants have an egg mass or young larvae in the whorl, you may want to consider treatment.

• Fall armyworm. These smooth-skinned caterpillars can vary in color from light tan to green to nearly black. The larva’s head has a predominantly white, inverted Y-shaped suture. Treat if more than 75% of the plants show whorl feeding; plants are stressed, such as by drought; and larvae are less than 1.25 inches long. This one is really worth watching for this year because it tends to be more severe on late-maturing corn.

• Second-generation corn borers. These larvae can hide and are difficult to control with insect applications. They can tunnel through ear shanks and also ears. If they tunnel though ear shanks, whole ears may drop onto the ground. If they tunnel into ears and stalks, then the stage is set for disease organisms to enter plants.