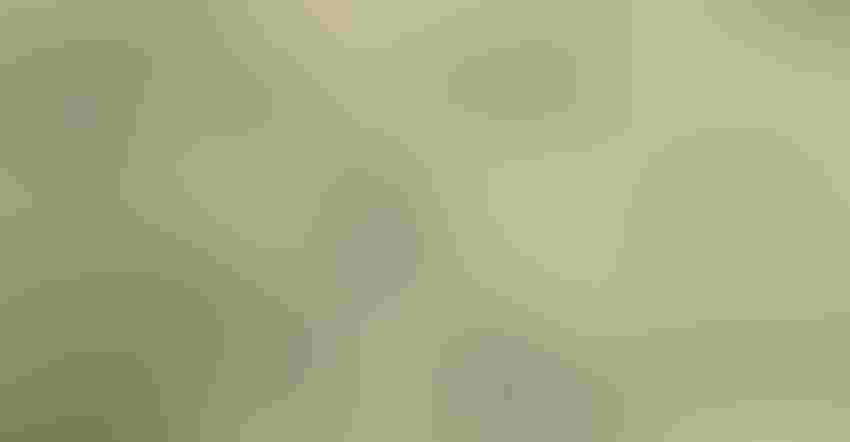 AERIAL VIEW: In this dry edible bean field at emergence, all dark green rows correspond to plots where char had been applied at varying rates.

Research being performed by the University of Nebraska shows that char, a byproduct of a local sugar plant, has potential to improve soils in the region. But more research is needed.

Many fields in the Nebraska Panhandle have been leveled for irrigation, intensively farmed, or have been affected by wind and water erosion, all of which can decrease soil organic matter. Lack of SOM is a significant indicator of degraded soil.

Plants grown on degraded soil are prone to less vigorous foliar growth, chlorosis, poor root development and poor emergence due to soil crusting. Furthermore, lighter-colored soils low in SOM warm up more slowly and have less potential to produce nutrients from mineralization. Many intensively cultivated soils in the Great Plains have lost 30% to 50% of the original SOM level.

It appears that char, a byproduct from Western Sugar Cooperative plants, has potential to improve soils in the region.

Char is a coal combustion residue. Unlike coal ash from a regular coal-powered power plant, char has 30% carbon by weight and some other nutrients beneficial to crops.

Trace metal content in char is below EPA’s screening limit. Char is also different from biochar, which is produced by pyrolysis (burning without oxygen) of biomass. Biochar has a higher carbon content, sometimes above 80%, but it will be cost-prohibitive to use biochar in agriculture, as there is no production to supply biochar in volume.

Several research projects are underway at the UNL Panhandle Research and Extension Center to evaluate use of char in agriculture.

Aerial imagery early in the season in 2017 showed an encouraging evidence of char as a potential soil amendment in a dry edible bean field near Scottsbluff. The soil of the char trial was calcareous with sandy loam and had less than 1% SOM. The trial was in an area under center pivot that has low productivity compared to the rest of the field, probably due to leveling of the field at some point in the past.

The image was taken in mid-July, following char application in mid-May. The same year dry bean yield increased by 12% to 52% with char application at various rates (10, 20, 30, 40 and 60 tons per acre). However, the only statistically significant yield increase occurred on the plot where 60 tons of char was applied.

In 2017, spring was cool and wet, and there were chlorosis issues. Char might have improved aeration or infiltration by improving soil physical properties, and that could have led to some beneficial effects.

It would require at least a few years of monitoring of this field to document any other significant benefits of char with respect to agronomic productivity or soil properties.

Char at 60 tons per acre is high-end, mainly for economic reasons. Because of cost associated with transport and field application, the chosen rate of char should be economically feasible.

Another char study initiated in 2016 in different crop rotation system in the UNL High Plains Ag Lab in Sidney (wheat-corn-pea) and in Panhandle Center Mitchell Ag Lab (corn-beet-corn-dry bean) showed neither harmful nor beneficial effects on crop yield in the first year of char application. However, in the second year (2017), dry bean in Scottsbluff and peas in Sidney showed yield increases with char. In both cases, yield increase plateaued at about 20 tons per acre of char.

Like any good and constructive work, it will take a number of years to improve soils enough to eventually enhance yields.

Maharjan is an Extension soil and nutrient management specialist. This report comes from Panhandle Perspectives, a regular column from the UNL Panhandle Research and Extension Center.