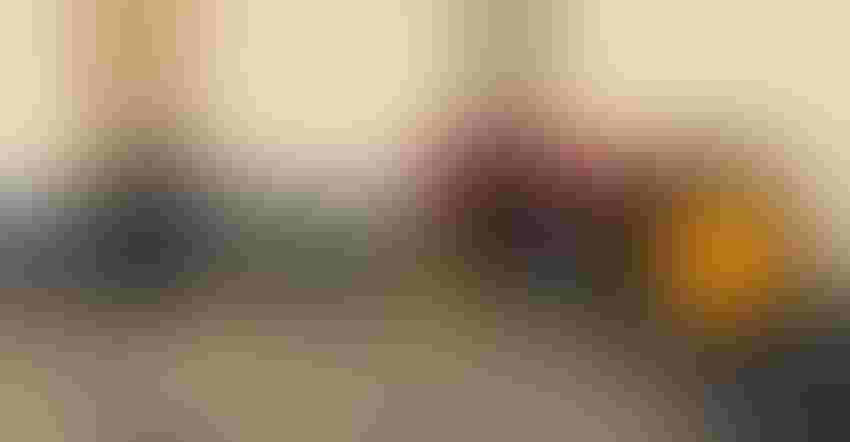 PLENTY OF HISTORY: Tim Carter (right) and his brother Dan have plenty of memories of their Massey-Harris 44 and Ferguson TO30 tractors. Courtesy of Tim Carter

Many families have a tractor with a history. The Carter family, Russiaville, Ind., has two: a Massey-Harris 44 and a Ferguson TO30. Each has special meaning, Tim Carter says. He farms the home farm and works at Caterpillar in Lafayette, Ind. Recently, he shared the story of both tractors.

“Granddad Payne farmed with this tractor until he retired in the early 1960s and then gave it back to us, saying, ‘The only reason I bought it at the sale was to save it for you boys,’” Tim recalls.

The boys kept the farm going, and Rosemary never remarried. Gene rebuilt the engine in the 44 in the early ’60s while farming and taking college courses at Indiana University-Kokomo, Tim recalls.

“I rebuilt the same engine in the late ’80s when I was using the tractor a lot grinding feed for my 75-sow farrow-to-finish hog operation,” Tim says. “I still use the Massey to run a hay elevator occasionally, haul manure and seed pasture mix with Dan’s Massey-Harris grain drill he bought at an auction.”

Ferguson TO30. To keep farming after the auction of their late father’s equipment, the boys needed a tractor. Their grandfather Walter Carter gave Dan two brochures, one for a Ferguson TO30 and one for a Ford 8N. He told Dan to study the brochures and let him know which tractor he wanted. Dan decided on the Ferguson based on the overhead valves for more power and volumetric efficiency, and it had wet sleeves to help with engine cooling, Tim recalls.

Using money from the equipment sale, this Ferguson TO30 is the tractor Dan chose to farm the home 80 acres, along with a plow, disk and cultivator. Their uncles did the planting and harvesting until the boys bought their own planter and combine.

Tim’s brothers kept two heifers from their dad’s milking herd and built the herd back. Dan figured a way to hook the Fergie’s intake to the vacuum line to milk when the power went out. The cows left for good in 1965.

The short block on the Ferguson was replaced in the early ’60s. Tim’s oldest son, Nathan, was mowing wheat stubble one day in the early ’90s when the connecting rod broke at the wrist pin and did major damage.

“I looked for a replacement block but couldn’t find one,” Tim says. “The Fergie sat in my barn until a few years ago when Dan found a place that said they could fix the block.”

The shop did some major mechanical work. After new rods, pistons and cam were installed, and after grinding the crank, the tractor was running again, Tim says. The Fergie also went to Riley Brothers in Boone County, Ind., to complete the restoration.

“We intend for both tractors to stay in the family for a long time,” Tim concludes.