Why the USDA corn acre number makes sense, for now

Corn bulls were taken by surprise as the USDA announced the largest March 1st stocks in history and a whopping 93.601 million acres will be planted in 2016. Keep in mind that's +5.6 million more than the 87.999 million corn acres U.S. producers planted last year.

I've been saying for weeks that corn acres were going to move higher as most producers I speak with seem less than thrilled about planting more soybean acres at a guaranteed loss or at best break-even. Most producers can't pay $250 to $350 cash rents by planting more soybeans. They feel their only chance to perhaps show a profit is to out produce the low prices with a bin busting corn crop.

I'm not saying I agree with the theory, as it clearly goes against my often quoted First Rule-of-Holes..."when you find yourself in one, stop digging." But I understand many producers feel their back is against the wall, and they can't afford to take any type of loss. In other words the "soybean-to-corn ratio" seems to mean very little, and the only path to profits seems to hinge on the hopes of a bumper corn crop.

We can debate until we are blue in the face about the total number of acres that will be planted. A lot will obviously depend on the weather during the next 30 days.

Diving deeper into the specifics, I was actually surprised to see the USDA projecting producers in North Dakota would plant an additional +650,000 acres this year. I understand their spring wheat acres are down by 1.0 million, but I am still surprised about the massive jump in corn acres, especially when producer in North Dakota have had to chew on such an extremely discounted basis. In other words, this number might be a bit overly optimistic.

I'm also thinking some of the areas to the Southeast and in the Delta regions might now be a bit overstated considering the recent heavy rains and delays producers are experiencing. The USDA is currently looking for Arkansas and Louisiana to add 330,000 more corn acres each, Mississippi to add 290,000 corn acres, North Carolina to add 140,000, Alabama an extra 80,000 acres, and Georgia estimated to plant an extra 60,000 acres. Bottom line, because of the recent heavy rains these areas might now be a bit overstated.

As producer, with the big production states all gearing up to plant more corn acres, it's tough to envision a major rally without a serious weather hiccup. We have to remind ourselves the market deems us to be in an oversupplied environment. Generally when in this space, the trades believes its job is to eliminate the highest-cost producers. The only way the market knows how to reduce supply is to drive prices low enough that it discourages production.

Unfortunately, based on the current currency valuations, most inside the industry are looking to the U.S. to be the one that cuts production. I don't think the American farmer received the memo... If yields come in anywhere near trend-line, many in the market are already talking about new-crop ending stocks moving north of 2.4 billion bushels! An ending stock number of this size could cause the market to re-test lows down near $3.00 per bushel.

I'm certainly not saying it happens overnight, because there is still a ton of weather risk and uncertainty ahead of us. What I am saying is with this many corn acres being planted, without a major weather hiccup, prices could push dramatically lower by harvest.

GET ALL THE VAN TRUMP REPORT INFORMATION NOW. 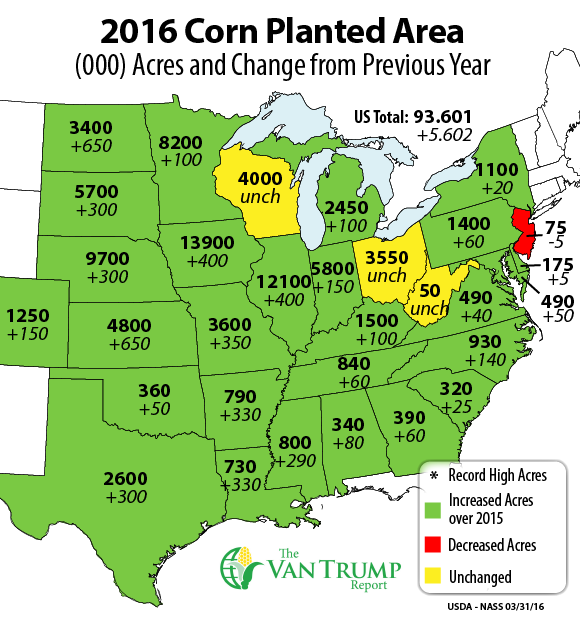