Rice production worldwide must increase 30 percent to 40 percent within the next three decades to feed those additional 2 billion people.California may be only a bit player in world rice production; however, the Biggs RES has long been a world leader in developing rice varieties and rice production systems. 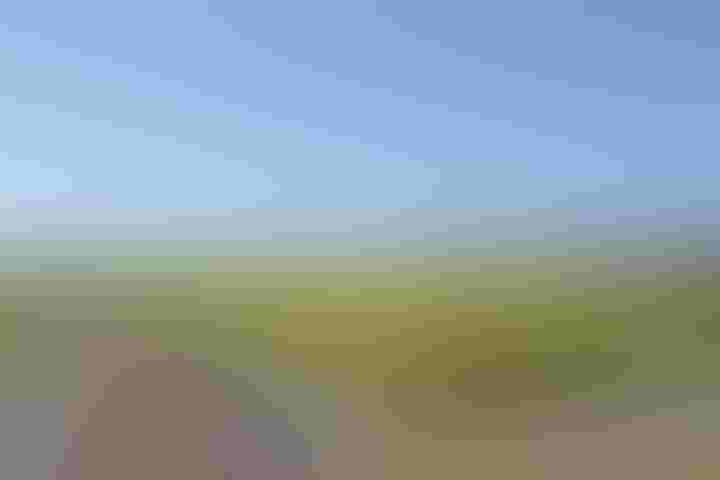 <p> Jeff Oster, left, plant pathology project leader at RES, is dwarfed by his research plot while talking about his work to a group touring the farm.</p>

Like the freight trains that continually thunder past the California Rice Experiment Station (RES) near Biggs, Calif., the world demand for rice rolls ever onward and will only grow more voracious.

More than half the world’s population depends on rice for basic nourishment, and world population is expected to grow from 7.1 billion today to 9 billion by 2050, according to James E. Hill, long time University of California Cooperative Extension agronomy/rice specialist and now Associate Dean for International Programs in the UC College of Agricultural and Environmental Sciences.

This will mean rice production worldwide must increase 30 percent to 40 percent within the next three decades to feed those additional 2 billion inhabitants, Hill told more than 600 people attending the RES Centennial Field Day Celebration.

California may be only a bit player in world rice production; however, the Biggs RES has long been a world leader in developing rice varieties and rice production systems and that will likely only increase in the future.

Ed Knipling, USDA-ARS administrator, reinterated Hill’s comments that it will be a massive challenge to meet future world rice demand, but the research station’s world class status as a rice variety breeding hub will play a key role in meeting that challenge.

Knipling hailed the cooperative effort of USDA-ARS scientists and university and RES station scientists in releasing 44 rice varieties from the station since it was founded by producers a century ago. Since 1997, it has released 10 different market types of rice, an unequaled accomplishment.

California’s rice industry would seem up to the challenge of being a leader in gaining that 30 percent to 40 percent more rice, if past history is any indication.

Since the 1960s, California’s rice yields have tripled with improvements in nitrogen management and weed control, as well as the introduction of new semi-dwarf varieties from RES plus production advances like laser leveling.

A quintet of rice growers at the field day have benefitted from much of these improvements/advances and report that their 2012 crops look good.

Colusa County, Calif., producers Joe Kalfsbeck and C. J. LeGrande say their crops are late, but hold promise for a good yield. Kalfsbeck expects to start harvesting his crop Oct. 1 and LaGrande says it will likely be late September before his combines roll.

“We got a late start—about two weeks late — due to cool weather in the spring,” says LeGrande. “The warm weather this summer moved the crop along pretty good.”

Kalfsbeck expects an “average yield.” He and his neighbor, however, said they are disappointed with current prices.

Water for irrigation remains a constant worry for farmers, even those in Northern California who get their water from above the problematic Sacramento-San Joaquin Delta.

“We had water issues early on this year, but we eventually received the water we needed,” said Kalfsbeck.

“We definitely need more storage in this state if we are to provide for farming and the urban population,“ LeGrand says.

Farmers have become almost totally dependent on the yearly mountain snowpack. If it snows, they get irrigation water. If it doesn’t, there’s not enough storage to capture excess water in wet years to carry them over a second year. Many have become too dependent on expensive well water that is costly to pump.

Father and son Yuba County, Calif., rice growers Elroy and John Morello said excessive heat early in August shut down the development of their crop, but on a warm day at the field day they said “weather like this” will help the crop.

With a late crop, the weather plays a big role in what is gathered by the combine, reminded John Morello.

As with many California crops this year, rice insects and diseases were minimal or easily controlled, according to these growers.

This despite the fact that UC entomologist Larry Godfrey reports 10 times more rice water weevils trapped in his control trials this season than in 2011. He said they began flying the last 10 days of April, but huddled on the levees until the rice was susceptible and moved into the crop. With a high population in 2012, growers can expect rice water weevils next season.

Tadpole shrimp populations also were high this season and damage was evident. He believes they were excessive due to the winter dry period. It took longer for growers to flood fields due to the dry spring soil conditions and that contributed to the higher shrimp population.

Godfrey continues to test a pair of promising insecticides to control these pests, Coragen and Belay. The former is several years away from registration, Godfrey says.

Godfrey predicted last year Belay would be available in 2012, but it has been entangled in a honey bee kill issue that has the state and federal governments asking for more testing, even though there is no honey bee involvement with rice production.

Godfrey told those on the field tours that EPA has just posted a clearance for Belay. He expects California Department of Pesticide Regulation to follow suit in time with a rice registration for the 2013 season. However, there are reports DPR is looking more closely at Belay and all neonicotinoid pesticide registrations in light of the bee kill issue.

Variety breeding efforts have been enhanced at RES with the establishing of a fully functional DNA marker laboratory. This lab is being utilized to identify DNA molecular markers for traits like blast, grain quality, stem rot and herbicide resistances that can incorporated into traditional rice breeding.