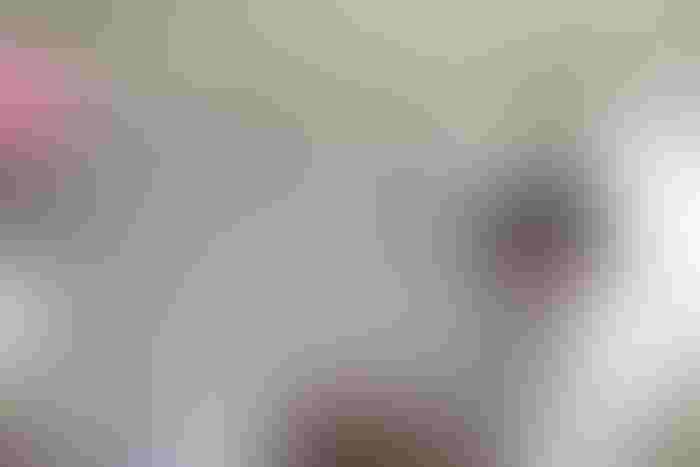 Growers in North Carolina have begun to notice that wheat tends to be taller and to produce larger heads in response to sub-soil slits from previous crops, but whether the practice is really improving yields has been up for debate.

“The Moores were set up with their DMI on 40 inches, so we checked it on 40 inches and on 20 inches, and compared the results with a chisel plow and with no deep tillage,” Love says.

DMI is a type of vertical cultivator, which is sold under a number of trade names.

Vertical tillage refers to systems where soil disturbance is confined to soil movement mostly in the upward direction and/or confined to a slot or strip where the next crop rows are to be planted using strip-tillage implements or coulter-based implements that perform full width tillage.

The fields tested on the Moore farm are sandy to very sandy. It’s not the kind of land on which most growers would plant corn, and is better suited to soybeans and wheat. It has a significant hard pan and is technically a Norfolk loamy sand, with a high sand percentage, Love says.

Also, previous research has indicated that soils with less sand and a high clay layer do not respond to deep tillage, so it’s important to know your soil type before doing any form of deep tillage.

The DMI in this test was run at 12-14 inches below the soil surface, just enough to break the hard pan without bringing up acidic clay.

“We got nearly 11 bushels per acre more wheat just by breaking the hardpan, and in our area of North Carolina, this is a significant improvement and it illustrates a production practice that can be a huge benefit,” Love says.

“Most growers using no-till systems don’t think about the impact of a hardpan from year to year, and I think it is affecting yields more than we realize,” she adds.

The extra cost of each operation was calculated into the equation, and it was cut and dry, she says. Labor, the cost for adding the tillage points on the DMI, and fuel costs, she explains. “To me, the cost and effort involved in running the DMI to get a return of $45 per acre is huge,” Love adds.

As wheat acreage grows, it is highly likely that more and more will be planted on marginal land with relatively low yield expectations.

By comparison, North Carolina’s corn crop was about 900,000 acres, but the increase from 2011 was only about 3 percent. Clearly there is a lot more land available for increasing wheat acreage in the future that is closer in quality to the land used in Love’s test, than there is in soils with high yield potential.

The cost of vertical tillage varies depending on the type equipment used. While 30 foot or wider vertical tillage tools require high horsepower to pull them at such high speeds, most growers already have larger tractors available and can achieve work-rates of 200 acres per day or more.

Growers have also found the fuel use per acre is very low compared to other deeper tillage tools.

Vertical tillage is new enough in the Southeast that many growers are finding it tough to get a handle on exactly what it is.

The most commonly accepted explanation of vertical tillage seems to be: A set of wavy discs and/or rotating spikes on a frame, which enter the soil vertically to a shallow depth. Such passes are usually made to help level the soil surface, enhance planter/drill opener performance and improve seed placement.

A number of growers in the Southeast have found DMI-type equipment handy for applying manure and fertilizers. These implements generally work at shallow soil depths and can be pulled across a field quickly enough to allow for treatment of a large number of acres in a short period of time.

In the Southeast there is a trend among growers with irrigation to grow corn behind corn and follow it with wheat to produce three crops in two years. While maximizing irrigation equipment, such practices are also maximizing soil traffic and are ideal for deep tillage applications.

The warm winter and spring also speeded up planting and reduced the cycle between compaction and rest for soils on many farms in the region.

All these factors should enhance the use of vertical tillage for growers planting in no-till or reduced tillage systems.

Love says many of the advantages of vertical tillage are too subtle to see by just watching a crop progress through the year.

“On the test we conducted on the Moore’s farm, we never saw any visible differences. We didn’t see it, but the yield data shows there was a significant yield increase by breaking the hard pan,” Love notes.

Vertical tillage isn’t so new to other parts of the U.S.

Brett Roberts, Illinois state agronomist, says it really isn’t a much different concept than anything farmers have used in the past.

“In a tremendous over-simplification, the vertical tillage tool is a hybrid of a disk and field cultivator. The concave disk is simply replaced with more flat disks and coulters. They don’t engage or throw much soil. They simply cut through the residue and only go a couple of inches deep,” Roberts explains.

He says vertical tillage was introduced in the Midwest about a decade ago. The idea was to avoid producing a hard layer of soil 3-4 inches below the surface. This is a scenario that occurs frequently on land that is in a long-term no-till system, he concludes.

In the Southeast, if soybean and wheat prices continue to drive acreage up, many growers will likely want to take a look at vertical tillage, especially on marginal land that is prone to hardpan buildups, Love says.