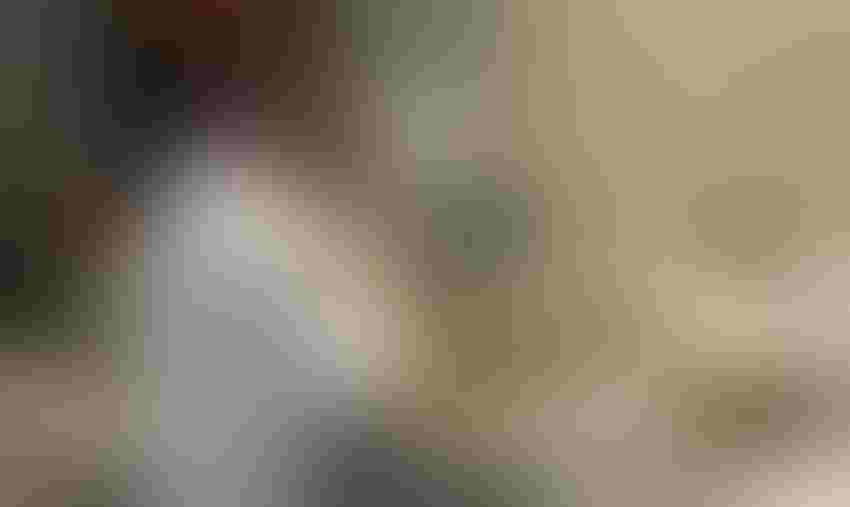 A worker inspects almonds that have come through the huller at a processing facility near Williams, Calif. At least six tree nut processing plants in California were shuttered because of the PG&E outage.Tim Hearden

The forced blackout imposed by Pacific Gas & Electric Co. to reduce fire danger amid high winds has slowed agricultural activities in some parts of California to a crawl as shuttered processing facilities have caused a backup in harvests.

Elaine Trevino, president of the Modesto-based Almond Alliance, said Wednesday she knew of five almond hullers that couldn't operate because of the outage, which affected more than 1 million people throughout the state.

"All of their machines have stopped," Trevino said of the hullers. "Some have generators, but most don't.

"You're talking about equipment, there's the food safety side of things, and then there are the employees and the backup," she said. "There's a lot of variables that are impacted by this operational delay."

As the National Weather Service issued red-flag warnings for high winds on Wednesday and Thursday, PG&E -- the state's largest utility -- announced plans to cut off power to parts of 34 northern, central and coastal California to reduce the chance of fierce winds knocking down or toppling trees into power lines, Fox Business reported.

In Northern California, University of California Cooperative Extension farm advisor Luke Milliron knows of at least one major walnut huller/dryer in the region that had its electricity cut while wet walnuts were in the drying bins, he said. Walnuts degrade in quality if the green wet hull isn't promptly removed after harvest and the nut is dried, he explained in an email.

"We are in the midst of walnut harvest and moving forward with harvesting the trees is contingent on the ability to have hulling/drying facilities operational," Milliron said. He added that he suspects that other walnut hullers were shut down, too, and that the economic impact is "uncertain."

Along the northern coast, UC Hopland Research and Extension Center director John Bailey reports hearing of wineries that were unable to process grapes and wine.

A third phase was being considered for the southernmost portions of PG&E's service area, impacting approximately 42,000 customers. Specific locations are still to be determined, according to the utility.

"We understand the effects this event will have on our customers and appreciate the public's patience as we do what is necessary to keep our communities safe and reduce the risk of wildfire," Michael Lewis, PG&E's senior vice president of Electric Operations, said in the release.

To the south, Southern California Edison was considering power shutoffs to nearly 174,000 customers in nine counties as Santa Ana winds were predicted Thursday, according to The Associated Press. San Diego Gas & Electric has notified about 30,000 customers they could lose power in backcountry areas, the wire service reported.

PG&E has estimated the power could be out for as long as five days, according to Fox Business. The company told media outlets it can't switch the power back on until its equipment is inspected for damage and repaired.

Early this week, officials in the UC's Division of Agriculture and Natural Resources were planning for outages to affect up to 16 locations, including the Hopland and Sierra Foothill research centers and Cooperative Extension offices in 14 counties, reported Pamela Kan-Rice, the division's assistant director of news and information outreach.

"In Mendocino County, the UC Hopland Research and Extension Center is operating on daylight and generators," Kan-Rice said in an email. "Some Hopland staff is able to work from the UCCE office in Ukiah, which has power.

At just after noon, power was still on in the UC Cooperative Extension's Central Sierra offices in Tuolumne and Calaveras counties but its offices in El Dorado and Amador counties had been without power all day, according to JoLynn Miller, the offices' director.

PG&E took the drastic measure nearly a year after the deadly Camp Fire in Butte County, which killed at least 85 people and was blamed on faulty power lines. A potential for as much as $30 billion in liabilities from the Camp Fire and other recent blazes forced the utility into its second bankruptcy in 18 years.

Classes were canceled Wednesday for thousands of schoolchildren and at UC-Berkeley, Sonoma State University and Mills College, according to the AP.

The outage has sparked widespread criticism, including from Gov. Gavin Newsom, who said Californians should be "outraged" and "infuriated" by the move even though he agreed it was necessary, reported KPIX-TV in San Francisco.

"It seems as if California, which fancies itself as one of the top world economies, is becoming a third world country," LaMalfa wrote in a Facebook post. "Expecting the power to stay on when the wind blows isn’t that giant a leap for mankind, yet here we are 50 years after the first moon landing having great inconvenience and personal or economic losses for many of our residents."

LaMalfa blames decades of "frivolous lawsuits, foot dragging bureaucracies, and a virtual ‘no touch’ forest policy" that have coupled with "onerous regulations on utilities on where, when, how, and what kind of electricity to generate," he wrote.

For her part, the Almond Alliance's Trevino told Western Farm Press she's most frustrated by the fact that industries are "not getting some solutions or plan of action from PG&E.

"For almonds, the backup is going to cause a delay in harvests," she said.