&quot;Typically cow-calf producers feed large round bales because they are easy, but that can be pretty expensive, especially when prices hit record highs like they did in 2008. Feeding harvested and stored feeds is a common practice, but it&#39;s also costly.&quot; 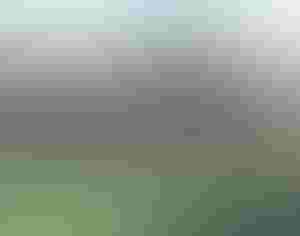 University of Illinois researchers recently discovered that feeding co-products and cornstalk residue in the winter can save cow-calf producers up to $1 per day per cow as compared to feeding hay.

Feed costs continue to be the No. 1 detriment to profitability in cow-calf operations. With feed comprising 60 percent of a producer's costs, any measures producers take to minimize expenses can make the difference between profit or no profit at the end of the year.

"Most feed costs occur in the winter when cows can't graze and utilize pasture," said Dan Shike, U of I assistant professor of animal sciences. "Typically cow-calf producers feed large round bales because they are easy, but that can be pretty expensive, especially when prices hit record highs like they did in 2008. Feeding harvested and stored feeds is a common practice, but it's also costly."

As ethanol production increases, so has the availability of corn co-products. Shike said more corn residue such as cornstalks are also being used as an energy source.

"Cornstalk bales are an adequate source of energy, but they are low in protein and need to be supplemented, especially when fed to cows in early and peak lactation," he said.

Researchers conducted two experiments on a herd of Angus and Simmental cows at the Orr Research Center in Baylis, Ill., and discovered many ways producers can save money. The cows calved between January and March and were evaluated from calving until breeding.

"We wanted to find the most economical way to feed cows in the winter without sacrificing performance," Shike said. "Our study revealed that producers could save about $1 a day per cow when feeding a combination of cornstalk residue and co-products as compared to hay."

"Again our goal wasn't to find performance differences in this study," Shike said. "We fed diets that should achieve similar performance results. In this experiment, we wanted to find the most economical delivery method within various herd sizes ranging from 50 to 350 cows."

In a 50-cow herd, the least expensive winter feeding strategy is to offer free-choice cornstalk residue and handfeed DDGS, he said. If producers use a tractor to feed DDGS instead of buckets, they are better off to feed free-choice hay. Feeding total mixed rations requires more equipment which in turn increases cost for the producer. In a 100-cow herd, hand feeding with buckets is not the most practical, but it's the cheapest. With this size of a herd, producers can use a tractor to deliver DDGS to the cattle at a more economical price per day than free-choice hay.

"We thought one of the advantages of grinding cornstalk residue was reducing wasted feed as compared to free-choice hay," Shike said. "But whatever we saved in unwasted stalks did not compensate for the added equipment cost to have both a grind and mix wagon as compared to a conventional feeding wagon. Even though those treatments were close, putting out a bale of cornstalks and feeding DDGS was always a little cheaper than grinding them together."

The key to profitable cow-calf production is to keep feed costs at a minimum. This information will help producers of various herd sizes not only select which feedstuffs to use, but also which delivery method best fits their operation, reducing feed costs and maximizing profitability.

"Our goal is to help producers identify which feedstuffs and delivery methods best fit their operation, resulting in the lowest possible feed cost for their operation and the most profitability," Shike said. "This will vary whether they are a smaller or larger operation. Regardless, producers have options and can increase their profitability using combinations of co-products."

Despite the heat, it's time to start planning winter feeding strategies, he said.

"If you decide to wait until February to decide to feed cornstalks, they will be hard to find," Shike said. "Now is a great time to contact area corn producers to identify who will have cornstalk bales for purchase. It appears we are on track for a substantially earlier harvest which will allow for a nice window to bale high-quality cornstalks this fall."

It's also a good time to price co-products depending on what you have available for storage, he added. Prices tend to go up in the winter, and it's best to have stored feeds in order before the winter sets in.

This research article, "Comparison of Corn Co-products and Corn Residue Bales with Alfalfa Mixed Hay on Beef Cow-Calf Performance, Lactation, and Feed Costs," appeared in the August issue of The Professional Animal Scientist.