Penn State is tracking the pest through the use of 28 pheromone traps in 20 counties. 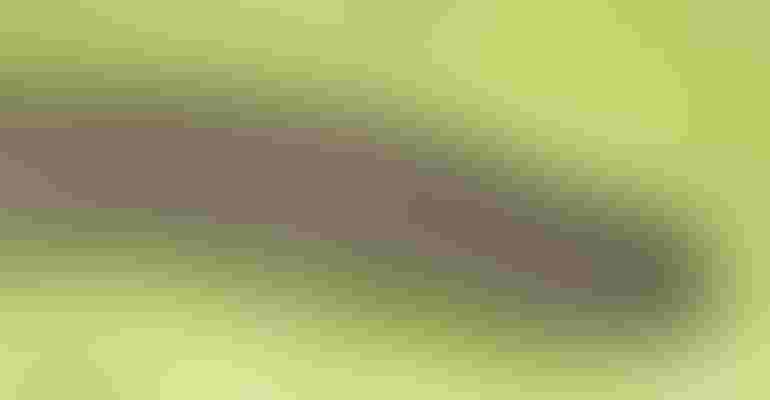 Preliminary findings show that Lancaster and Lebanon counties in Pennsylvania are at highest risk of a black cutworm infestation, at least right now.

John Tooker, professor of entomology at Penn State, says that based on checks of pheromone traps in those counties, black cutworm caterpillars are present, and their numbers are growing. Most other areas have seen little if any activity yet.

Penn State’s Black Cutworm Monitoring Network, which has been around since 2009, tracks black cutworm populations through pheromone traps placed in fields across the state. This year, 28 traps in 20 counties are being tracked.

Traps with at least eight moths over two nights show an elevated risk for black cutworm infestation. Cutting damage usually occurs 300 growing degree days after the caterpillars arrive. Given the recent cool snap in many areas, it will likely take a couple of weeks before scouting and possible treatments are recommended.

The pheromone traps went out at the end of March and will be left out until June. The pest feeds on corn in the spring and does most of its damage during this time. Black cutworms overwinter in the ground in Virginia and areas further south.

“Its arrival in the spring occurs usually in the front of spring storm fronts,” Tooker says, adding that they usually arrive in waves.

While the trap program is useful, Tooker admits that it’s also imperfect. While females are more important to keep track of because they can reproduce, the traps only attract males. Because of this, he says that you can only assume that if male caterpillars are present that the females are likely present, too.

Widespread damage from black cutworm is rare but can occur. Thousands of acres of corn in the state were decimated in the early ’80s due to high infestations.

Tooker says that the caterpillars don’t exist in as high numbers today most likely due to the use of Bt corn, but that’s just a guess since there is no direct evidence that Bt corn has helped lower their populations. Still, the caterpillars do exhibit the same type of feeding behavior as European corn borer and other pests that are targeted by Bt corn.

Where soil moisture is abundant and plants are small, black cutworm larvae hide in the soil during the day and move to the soil surface at night where they cut off plants just above the soil surface. One larva will cut an average of five corn plants during its development.

In dryer soils the larvae do not move to the surface. Rather, they chew on the plant just below the soil surface causing the corn plants to wilt and die.

Many farmers apply insecticide in their cornfields at the same time they apply an herbicide for post-emergence weed control, but Tooker recommends against doing this since the caterpillars often arrive long after an insecticide is applied.

He says farmers should instead scout fields for number of cut plants per growth stage. The thresholds are two, three, five and seven cut plants per 100 for seedling, V2, V3, V4 and V5 stage plants.

Lots of different insecticides can kill black cutworm, but Tooker recommends a low-cost pyrethroid as one of the best options.

“This is a far more targeted approach,” he says of scouting and control.

Cultural control is possible in fields that are infested year after year. Removing cool-season weeds along field edges can starve the young caterpillars. If possible, avoiding planting corn after pasture, alfalfa or red clover.