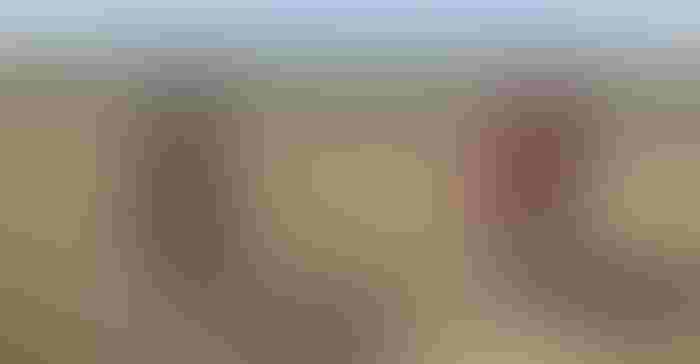 The cover crop greening up in Tom Griebel’s field just outside Holland, Minn., will reduce nitrate levels in the shallow aquifer that supplies drinking water to some of Lincoln Pipestone Rural Water’s 4,700 customers.

A Clean Water Fund grant from the Minnesota Board of Water and Soil Resources offset the cost for Griebel to buy seed and hire someone with the expertise and specialized equipment necessary to plant cereal rye and winter wheat in different parts of the field after last fall’s soybean harvest.

“I was interested in trying it anyway, and the funding just pushed me over the edge,” Griebel says. Along with profitability, he also wanted to improve soil health and keep nutrients such as nitrates out of the water system.

For their three-year commitment, farmers who plant cover crops receive $40 per acre per year. Those who plant perennial vegetation such as alfalfa or Kernza (a perennial wheatgrass) receive a one-time, $200-an-acre payment. The $299,520 grant runs through 2023.

To date, 17 producers within Holland and Edgerton’s drinking water supply management areas have enrolled 22 parcels ranging from 6.7 acres to 263 acres. All told, farmers enrolled 875 acres in perennial vegetation and 746 acres in cover crops. Another 291 acres were slated for cover crop enrollment this spring.

“The ultimate goal would be to have the majority of these drinking water supply management areas in some sort of soil health practices,” says Laura DeBeer, a Pipestone SWCD-based water resources technician. DeBeer’s position is partly funded by the Minnesota Department of Health for one-on-one work with producers and water suppliers throughout the six-county region.

“Nitrates are quite mobile in the soil profile,” DeBeer says, explaining the value of perennial vegetation and cover crops.

Nitrates that aren’t taken up by growing root systems can leach into the groundwater. Shallow aquifers beneath gravely and sandy soils are more susceptible. Perennial crops use nitrogen as they grow. Cover crops use nitrogen and then, as plants decompose, release it to fertilize the next season’s cash crop.

“Ultimately we just would like to see more growing roots in the area, be they either perennial vegetation or cover crops between cash crops, and have producers in the area know and understand their role in drinking water protection,” she says.

The Minnesota Department of Health links nitrates to blue baby syndrome (when a baby’s skin turns blue because of an insufficient amount of hemoglobin in the blood). The U.S. EPA standard for nitrates in drinking water is 10 parts per million. For treatment to stop, nitrate levels must remain under 7 ppm.

Edgerton spends about $5,000 a month to remove nitrates from drinking water. Levels have fluctuated — decreasing when land was in permanent cover through the federal Conservation Reserve Program, increasing when it was farmed. With more land back in perennial cover — and with less rain —nitrate levels have decreased from about 20 ppm to 12 ppm over the past year.

Lincoln Pipestone Rural Water took four of its eight wells at Holland and North Holland offline in 2017 because a byproduct of its nitrate treatment had the potential to cause a different type of pollution. An experimental treatment that reduced nitrate levels to zero was discontinued because it was cost-prohibitive, and Minnesota Pollution Control Agency funding was available to help connect to South Dakota-based Lewis & Clark Regional Water System.

Closing the four wells reduced production from the Holland water treatment plant by about 40%. Customers nearest that plant off U.S. Highway 75 still get their drinking water from the four wells that don’t require nitrate treatment. Some customers farther south receive water from other sources.

Growth in agriculture — particularly hog operations — and in towns drives demand. LPRW connects about 50 new rural customers per year. It recently connected an entire community. Other communities with aging infrastructure or compliance concerns have expressed interest.

“Water is limited in this area,” Overby says. “It always seems we’re searching for water to meet demands of the region. It’s a hard pill to swallow … if the water that is available can’t be supplied without treatment.”

The closed wells could reopen if a cost-effective nitrate treatment emerges, or if changes on the landscape sufficiently reduce the nitrate load in the aquifer.

“What this grant is hoping to achieve is to have positive impacts before necessary treatment costs,” Overby says. “If all the producers were to participate in this, and there is huge impact, the nitrogen load lessens. The benefit would be that Lincoln Pipestone would not have to necessarily seek treatment, would not have to incur huge costs for developing a new treatment process to eliminate nitrates.”

DeBeer says she hopes the practices implemented would show a trend in nitrate reduction after the three-year grant period.

“They are watching to see what my results are, to see if they’re going to try it or not,” he says.

By early June, Griebel plans to bale or chop the cover crop — cereal rye on part of the field, winter wheat on the rest — for livestock feed, Then he plans to plant teff grass, which he expects will produce two crops of hay this season. He’ll follow with no-till corn.

Griebel, who raises feeder cattle and sheep, gradually incorporated no-till on 300 of the 1,500 acres he runs with his wife, Barb, and parents, John and Corlys Griebel. Cover crops grow on about 200 of the 300 no-till acres. He plans to buy a no-till drill and eventually convert the whole farm. The benefits are twofold. No-till eliminates the time, expense and machinery required for spring and fall tillage. It’s also a way to maintain the size of his operation after his parents retire.

“My plan is to eliminate some machinery and time, and hopefully end up with more money in my pocket and end up with better soil on top of it all,” Griebel says.

Out of necessity, Griebel tried no-till for a short time in the early 1990s after a hailstorm. A prevent-planting after a wet spring that kept farmers out of the field led him to try cover crops a few years ago. He recommends starting slowly and talking to neighbors.

The following excerpt from that conversation is edited for clarity:

How does a person get into cover crops and no-till? As many different farms as there are, there are that many different ways to use cover crop and no-till. One thing that I have noticed by doing it across the different soil types that I have: There is no right, wrong or definite way to do it. You’ve just got to try what you think will work with your mindset, operation, money — and then adjust it as you go.

If you want to try it, go in and talk to Laura (DeBeer, of Pipestone SWCD), try it on a small basis. And [try for] numerous years. When I first did no-till a long time ago, I wished I would have kept it going.

How have those practices affected yields? It seems like the longer I do it, the more they keep coming up, compared to other pieces that I farm other ways. There are a lot of things that go into the yield — the kind of year, the maturity, soil type. We farm within a 20-mile-diameter circle. In that 20 miles, there are a lot of soil differences and moisture differences.

From what people tell me, it takes four to five years to really see yield drastically improve. I have seen little improvements — averaging about 5 bushels per acre for beans, about 10 bushels per acre for corn on fields were yields that could be verified — which I am happy with, because that means we’re going in the right direction. The no-till cover crop does take a little bit more management. There’s a little less room for error and assumptions. You have to pay attention to what’s going on and adjust to the conditions.

What questions did you have when you started? Am I really doing the right thing? Is this the right decision? In farming, if you don’t put that seed in right the first time, you are messed up for the whole year. That was my biggest concern. I had very little experience with it, no hands-on at all. Now I’m not quite as gun-shy.

What should people consider before trying it themselves? Talk to people that they trust that have done it — neighbors, friends, the local FSA (USDA’s Farm Service Agency), seed dealers, chemical dealers — just get as much information about it as you possibly can. And then take a leap of faith. Try it. Mother Nature forced my hand. Everybody’s got their own take on what works. Go in with as much knowledge as you can and adjust to the conditions. Go in with an open mind.

What are you trying next? I am sidedressing corn this year. I’m experimenting with that to see if we can cut our nitrogen rates — feed that plant when it needs it, and then there’s less leaching, hopefully. If the year looks dry, or too wet, it just opens up a lot more options.

The city of Edgerton, Minn., bought 37.2 acres within its drinking water supply management area this spring to ensure that the nitrate-reducing benefits of perennial vegetation remain intact.

A Clean Water Fund wellhead protection partner grant from the Minnesota Board of Water and Soil Resources covered 90% of the $360,000 purchase price. The transaction between the city and Carol Brands Living Trust was finalized April 12.

“Our goal is to get it [the nitrate level] back below that 7 ppm, but the main reason that we’re really after this is because it’s been in wellhead protection for so long that we didn’t want to lose it and find out what would happen if the wrong person did end up with the property,” says Doug Brands, the Edgerton water supervisor as well as the seller’s nephew.

The land lies upslope from the city well, which supplies 550 residential and business customers. It’s been part of Edgerton’s wellhead protection efforts since 1991. Previously, the city had received Minnesota Department of Health grants to supplement Conservation Reserve Program payments to the landowner. That effort brought nitrate levels down from about 20 parts per million to 15 ppm.

The city chose Kernza partly because of its massive root system.

“Like any grass, it used tons and tons of nitrogen. If there’s nitrogen in the soil, it uses it before it has a chance to get down into the drinking water. It’s a really good nitrogen scavenger,” Brands says.

On his own 230-acre farm in rural Edgerton, Brands raises corn, soybeans and Kernza. With assistance from Pipestone Soil and Water Conservation District and its Clean Water Fund grant targeting nitrate reduction, he planted Kernza on the 7 acres of his farm that lie within the city’s drinking water supply management area.

Brands says the three-year commitment would give him time to decide whether to expand the crop.

“It’s hard to sell it to others if you’re not willing to do it yourself,” Brands says.

Wessel is an information officer with the Minnesota Board of Water and Soil Resources based in Waite Park, Minn.