It was a Sept. 10 around 1:30 p.m. in a soybean field a few miles south of Shellman in southwest Georgia where crop consultant Kevin Cotton was bitten by two rattlesnakes.In total, it took 26 vials of antivenin, two different ER visits and four nights in the hospital to start to get over the snake bites.Across the country there are 7,000 venomous snake bites annually. The majority of those bites happen to people who handle the venomous snakes regularly, like zookeepers and pet owners.&nbsp; 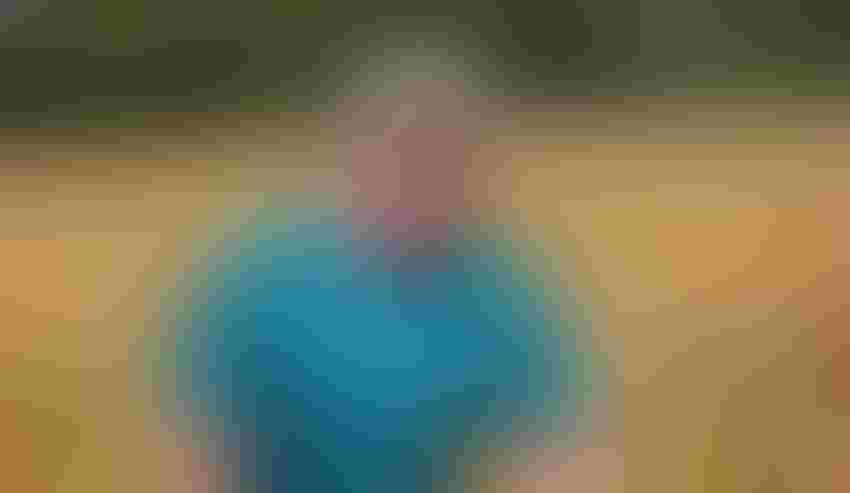 <p>CROP CONSULTANT Kevin Cotton in soybean field near Shellman, Ga., Oct. 28, the same field where he was bitten by two timber rattlesnakes at the same time six weeks earlier.</p>

Kevin Cotton never heard the snakes in the soybean field.

The first one bit him and he knew it was bad. He quickly stepped a few feet away and that's where the other one hit him. Two rattlesnakes bit him within seconds of each other.

It was Sept. 10, a Tuesday, and around 1:30 p.m. in a field a few miles south of Shellman in southwest Georgia. The crop consultant (Yes, he is a cotton consultant, too, with the last name Cotton) thought ... Well, we can't say here what really crossed his mind or what came out of his mouth.

“Well, I knew what had happened when the first one hit. You couldn’t see through the canopy of the beans and I moved about five feet away to step away and when I did that’s when I felt the other bite,” Cotton said.

He stepped much quicker to get out of the field.

The snakes bit Cotton, who is 49, on the right leg, once behind the ankle near the Achilles’ tendon and the other tapped him a few inches higher up on the calf muscle. It hurt immediately. The snakes vanished. He never saw them. A doctor told him later two snakes bit him. The bite marks were different, different widths apart which indicated two snakes of different sizes.

Cotton kept calm but he was several hundred yards away from his truck. “I knew that I just needed to keep it calm and not get the adrenaline running and get myself to the hospital, but I didn’t know if the venom was about to move straight to my heart and kill me there. … And was thinking, ‘I don’t want to die in a soybean field. At least let it be in a cotton field,’” he said, now taking a lighthearted view of the extremely rare occurrence that set him on a weeks-long adventure to recovery.

He flagged down two gentlemen who happened to be working a pivot line nearby in the field. The workers first thought he was waving hello and responded in kind. But Cotton waved a bit more feverish and pointed to his leg. They picked him up.

Cotton wanted them to just take him to his truck so he could drive himself to the hospital, but one of the guys took him on to the ER at a small hospital in Cuthbert, Ga. Cotton had already been on his phone with other people and the ER there was expecting him.

Cotton got eight vials of synthetic antivenin in Cuthbert. He stayed the night there and was released the next morning and was told to take it easy and come back if things changed.

Things changed and weren’t going well later that Wednesday afternoon after returning to his home in Leesburg, Ga. “Told my wife I couldn’t feel my leg,” he said.

She took him to the region’s bigger hospital and ER in Albany, Ga. There, after being seen by a local surgeon, he was told they might have to cut his leg open. It was barely getting blood circulation and, well, that had to be fixed fast.

“I told the (surgeon) that I had a lot going on and it was a busy time for us right now and that I really couldn’t be laid up for long. … And that cutting the leg needed to be the very last option,” Cotton said. His High Cotton Consultants, Inc. services 15,000 acres each year around southwest Georgia, from cotton and soybeans to wheat and peanuts.

He got another 18 vials of antivenin and another three nights in the hospital. The surgeon also diagnosed, through his experience and from how the muscles were acting, that Cotton had been bitten twice and that it was most likely by timber rattlesnakes. He was released Saturday after the Tuesday snake bites.

A week after the bites, he was back in the fields. As he drove into the same field where he had gotten bitten, he saw a timber rattler on the road. “I unloaded my shotgun, then ran over it several times and then beat it with a stick,” he said. “The animal rights folks might not like that but they likely have never been bitten by two rattlesnakes.”

It took him several more weeks to get back up to speed. The area on his leg where the snakes bit still swells but for the most part looks fine.

Did he ever think he was going to die? “No, the bites were the least of the problems. It was everything after that that was rough,” he said. All told, and all the bills haven’t come in yet, Cotton figures his two-step dance with the serpents will end up costing more than $200,000. He has insurance.

“I’ve heard of one person getting bit by a venomous snake, but certainly not by two venomous snakes at the same time,” said John Jenson, snake biologist with the Georgia Department of Natural Resources, who has worked more than two decades in Florida and Georgia. “Certainly unusual and pretty certain nothing like it has been reported in Georgia before.”

Jensen hadn’t heard of Cotton's case until contacted by a reporter. Jensen and Cotton haven’t spoken … yet.

What are the chances of getting bit by two venomous snakes?

Across the country there are 7,000 venomous snake bites annually, Jensen said, relatively low considering how many people live in the United States. Plus, the majority of those bites happen to people who handle the venomous snakes regularly, like zookeepers and pet owners, or to people trying to get a closer look or to kill the snakes.

Venomous snakes tap roughly 2,000 people who stumble upon them at the wrong place and wrong time, like Cotton. Again, the stats, Jensen said, likely only refer to one snake bite per person and not two bites from two snakes at the same time. Throughout the country, only six people die from venomous snake bites each year. In comparison, about twice as many die from lightning strikes and more than 30 people die each year from dog attacks and bites.

Jensen said for people who work outdoors, particularly in the Deep South where there are six species of venomous snakes, the risk for getting snake bit is obviously higher for them than for someone who works indoors all day. And in Georgia, only timber rattlesnakes and diamondback rattlesnakes are considered lethal or have caused deaths. The region’s coral snake is deadly lethal, but its shy nature and short fangs make it less of a danger. But Jensen noted that Georgia’s coral snake’s bite comes with a mild anesthesia mixed with toxin, meaning a victim could get bit by a coral snake and really not feel it immediately.

A copperhead, pygmy rattlesnake or moccasin bite can make you wish you weren’t bitten but likely won’t kill you and most often victims are not given antivenin for such bites. A healthy person bitten by these snakes is usually monitored until the body has time to fight the venom back.

“There is nowhere really in Georgia so far away from medical center that someone can’t get help in time to survive a venomous bite. But victims need to seek medical assistance immediately if they believe they have been bitten by a venomous snake,” Jensen said.

September, when Cotton got bit, is prime breeding season for pit vipers, which includes rattlesnakes, Jensen said. “If you were going to be bit twice, it would be this time of year, between August and October,” he said.

August through October is also birthing season for pit vipers, but it is unlikely Cotton stumbled up on a birthing sight, the fang marks on his leg too big and high up on his calf. Rattlesnakes give birth only every other year. The snakes that give birth this year will breed next year. Those that bred this year will birth next season.

“The chances that he (Cotton) will get bit again are extremely low. They were low already. But, if I were bit by two timber rattlesnakes at the same time, I’d probably start wearing armor in the field,” Jensen said, jokingly.

Cotton said he watched his step very closely those first few weeks back in the fields and he wore snake boots, something he is going to require all his helpers to wear during summer. He keeps snake boots now in his truck, but Cotton on a cool October morning was back in his standard uniform: t-shirt, shorts and good walking shoes.

Pondering whether he was a lucky man or not, “I wish I could turn this kind of luck around and into winning the lottery,” he said, laughing and adding that he’d probably just get struck by lightning the next day after winning.