Most irrigation water inefficiencies in cotton production occur early in the season mainly&nbsp;due to distribution methods along with application rates and amounts.Alternate row irrigation is a potential way for producers to more efficiently water cotton.One way to estimate when soil temperatures are approaching an acceptable level for cotton planting is to monitor the minimum air temperature every morning.&nbsp; 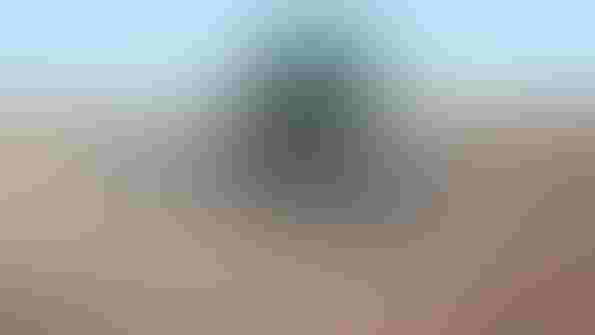 A day earlier, Martin attended a conference where participants discussed the next 100 years of water use in Arizona. The discussion centered on how Arizona can ensure adequate water supplies for its residents if Arizona’s ongoing drought continues.

Agriculture was discussed as the “buffer” to guarantee future water supplies, Martin says. When it comes down to a water shortage, it was suggested that some agricultural sectors could be closed down and started back up once the shortage was over.

“Overall, Arizona agriculture is probably alright this year in available water for crops,” Martin said. “There are a few exceptions; mostly those growers who depend on the San Carlos system. Unless the snowpack increases this spring, we will likely face a water deficit situation next year.”

Most irrigation water inefficiencies in cotton occur early in the season mostly due to distribution methods along with application rates and amounts. This is especially true with surface water delivery.

Martin says alternate row irrigation (ARI) is a potential way for farmers to more efficiently water cotton. The ARI practice is traditionally used to control salt levels in the soil.

In Martin’s 2006-2008 ARI trials at the Maricopa Agricultural Center, one cotton furrow was irrigated and the next row was left dry. Conclusions from the study suggest farmers can reduce overall water use with ARI and still maintain yields.

“Alternate row irrigation can reduce water use,” Martin said. “While we irrigate 50 percent of the field, the total application amount is not reduced by 50 percent. Since we irrigate every other row, we are in fact only irrigating half the field, although we supplied water for the entire crop. Surprisingly, yields were maintained with ARI.”

In the trials, cotton seed was traditionally irrigated up above the seed line. After emergence, 8 to 12 inches of water is typically applied to the crop. With ARI, an initial irrigation of 3 inches was followed one to two weeks later with another 3-inch shot of water.

The tail end of the irrigated row is left open which allows water to enter the dry furrow for 10 feet to 15 feet to help control water if needed.

“Overall, we saved about 7 inches of water annually over the three-year trial,” Martin said. “With the price of water and how those outside of agriculture are eyeing agricultural water for city use, the water savings could be fairly significant for agriculture.”

Paul Brown, UA Extension specialist and research scientist based in Tucson, discussed the impact of planting dates on cotton plant emergence and the vulnerability to heat stress and pests. He warned against planting seed too early in cool soil yet not too late due to the threat of heat stress which develops during the summer monsoon season.

Cotton, a warm-season crop, does not develop good root structure in soil below 60 degrees. Research suggests that planting into soil 60 degrees or lower can slow germination and increase the susceptibility to disease, Brown says. Very cold soil can result in poor stand development.

Chilling injury can destruct or abort the tap root and cause the development of lateral roots. Complications can develop later in the season.

“The first day water is put to seed is the critical day for performance in cool soils,” Brown said. “The metabolic processes associated with early germination are very sensitive to temperature during the first 24 to 48 hours after moisture reaches the seed. If the soil temperature is too cold, these mechanisms get out of whack.”

The industry-preferred planting standard is 65-degree soil or higher. Sixty-plus degrees is acceptable, 55 degrees is marginal, and 50 degrees is dangerous.

Brown manages the UA-owned Arizona Meteorological Network, an automated system of 28 solar-powered rural and urban weather stations which gathers information including soil temperatures at 4-inch and 20-inch depths beneath the soil surface.

By March 1 in Buckeye (West Phoenix), soil temperatures at 20 inches are usually 60 degrees or higher. The 4-inch temperature should drive planting date decisions.

“The surface is the key factor since it’s close to the current climate,” Brown said.

On average, soil temperatures at 4 inches reach the acceptable range for planting during the last week in March in Buckeye. However, early spring weather can fluctuate year-to-year. The direct measurement of soil temperature is the best way to make planting decisions.

Another way to gauge when soils near the proper thermal range is to monitor heat unit (HU) accumulation.

Typically, growers in the Buckeye area begin planting at about 500 heat units.

“The earlier you plant the better as long as the soils are acceptable for seed germination,” Brown said.

Brown is working with the UA’s Pedro Andrade and Randy Norton to develop a phone app that will deliver the latest planting information directly to Smart cell phones.

While planting too early can have season-long drawbacks, planting too late also creates risks. Planting after mid April in central Arizona can reduce lint yields tied to summer weather including the monsoon season and heat stress.

“Heat stress is based on canopy temperature,” Brown said. “Heat stress can result in malformed reproductive structures on cotton flowers. The result is aborted or small, misshapen bolls which can reduce yields.”

In Buckeye, the median first heat stress date is about July 12. Early optimal planting dates which fall within the HU-based planting windows can help minimize exposure to heat stress.

“The concept is to try to avoid heat stress during primary bloom,” Brown said.

As to the weather forecast for this spring, Brown says forecast maps from the National Oceanic and Atmospheric Administration suggest warm and dry weather in the West and Southwest.