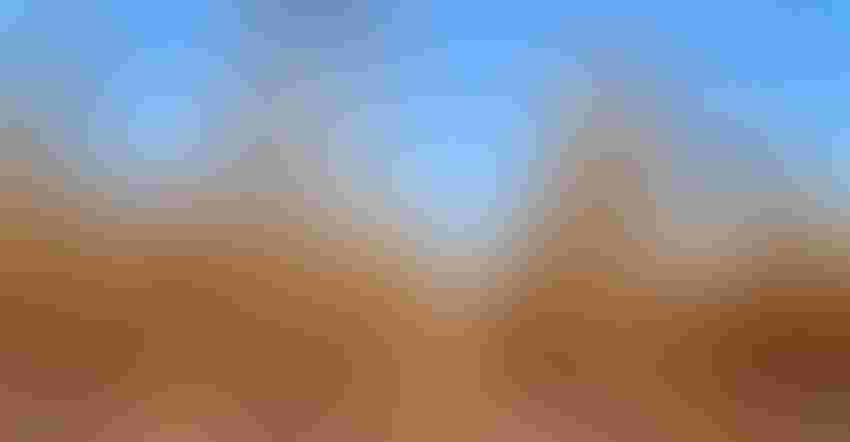 A corn field near Snook dries down for harvest. Early indications suggest corn and sorghum grain yields will be poor to below average.Texas A&M AgriLife photo by Courtney Sacco

Grain prices remain strong, but heat and drought have taken a toll on Texas crop acres, which could impact supplies and prices in the short- and long-term, according to Mark Welch, Texas A&M AgriLife Extension grain economist in the Department of Agricultural Economics, Bryan-College Station.

Texas appears to be facing much lower grain production in 2022 compared to the previous year, Welch said. The likely outcomes coupled by high demand are putting a premium on grain prices despite recent dips in the market.

Wheat yields were abysmal for much of the state, he said. Corn and sorghum projections do not appear to be much better as producers in the southern half of the state continue harvesting.

Cash wheat, corn and sorghum grain prices are strong but not as strong as they had been in late May, Welch said. For instance, wheat prices were $3.86 per bushel in August 2020 before starting a steady climb to more than $8 per bushel prior to the Feb. 24 Russian invasion of Ukraine. Prices quickly jumped to more than $11 per bushel before peaking at $12.62 per bushel on May 26.

Cash wheat prices have fallen relatively quickly to $8.27 per bushel on July 14. Corn and sorghum grain prices took a similar path, though the post-invasion spike was less dramatic. Corn climbed from $3.41 per bushel in February to around $6.50 per bushel before the invasion. Corn prices peaked at $8.92 per bushel by June but fell back to $6.48 per bushel as of July 14.

“Cash prices for feed-grade grain in Texas are still at a premium,” he said. “We’re still living on supplies, and harvests in southern parts of the state are trickling in, but yields are below average.”

The Coastal Bend and South Texas corn and sorghum crop harvests are well underway, but the heat and drought have taken their toll on grain production. Many producers from those regions were reporting below-average to poor yields.

Harvests from those regions are some of the first to hit the market and begin to replenish supplies, Welch said.

Many producers in regions where corn and sorghum plants are still progressing were reporting poor to fair crop conditions with some reports of fields being salvaged as forage for cattle.

“It’s just going to be a tough year for producers to find a profit,” he said. “Grain prices are relatively high, but input costs for everything from fuel to fertilizer are high too. Producers need every penny.”

Welch said cattle on feed and the short-term feed demand spurred by drought-stricken rangelands and pastures were contributing to the tightening supplies and higher grain prices.

AgriLife Extension reports from around the state indicate cattle producers were moving calves earlier and culling herds deeper than usual. Sale barns around the state have been reporting higher sale volumes over the last few months, but high sale numbers are picking up in historically wetter parts of the state, particularly East Texas.

Welch said feed-use numbers have been strong this year for all livestock, but cattle producers around the state are experiencing below-average hay and grazing capacity.

“The question is how long that can continue before cattle producers work the numbers or run out of grazing and supplemental feed substitutes they can use to efficiently feed grain?” he said.

The U.S. Department of Agriculture added around 400,000 acres of corn to its planted acre estimates in a recent report. Welch said growing conditions in the nation’s Corn Belt are much better than last year and good crop ratings were emerging as well.

But western parts of the Corn Belt are experiencing high temperatures as the crop progresses through stages sensitive to heat. How those acres fare will likely impact longer-term yields and ultimately grain prices.

Welch said the USDA made the harvest-area adjustment based on a June acreage survey but held the U.S. yield estimates for 2022 steady at 177 bushels per acre. Yield estimates remain unchanged since May.

“Further down the road is more uncertain,” he said. “We need every bushel and every acre. The umbrella over all the markets is the economic slowdown and what that could do to demand on everything from corn to crude oil and cattle. That is an overarching concern.”

Dry conditions continued. Soil moisture conditions were very short. Corn harvest was ongoing with below-average yields reported. Cotton continued to hang on despite high temperatures and low soil moisture. Some sesame was planted almost a month ago over wheat stubble but had yet to emerge. Pasture conditions were very poor and continued to decline with high temperatures and limited rainfall. Cattle body condition scores were fair and beginning to decrease with less-than-ideal grazing conditions. Producers were feeding hay and other supplemental feed sources but were beginning to cull cattle due to drought. Stock tanks remained low or dry. Some producers were testing forages for prussic acid and dealing with new problems, such as blue-green algae in water sources and other issues that can arise during drought.

Weather was very hot and dry. A storm did develop over some range country, and lightning started multiple wildfires. One fire burned around 750 acres. Dryland cotton was in very poor to poor condition with some reports of fields failing. Irrigated cotton was progressing with low insect pressure, though stink bugs were reported in fields with beneficial insects present in some fields. Heavy numbers of grasshoppers were reported in some counties. Some sorghum fields were heading out and were fair overall. Many failed or poor sorghum and corn fields were expected to be salvaged for forage. Pastures were dried up, and most producers were very short on hay. Producers reported very little hay for sale in the area. Cake and minerals were being fed to supplement cattle diets, and herds were being culled. No Sudan grass had been planted to date.

Scattered rain fell in parts of the reporting area, but dry conditions remained. The isolated showers halted some corn and sorghum harvest operations. Cotton was nearing maturity with most fields showing open bolls. Rice was headed out. Most rangeland and pastures remained in poor condition. Livestock auctions remained busy as many producers were culling and weaning early. Supplementation of livestock was still required. Ponds were dry or very low.

Producers continued to struggle. Subsoil and topsoil moisture conditions were very short. Excessive heat and very little to no rainfall has put many of them in a bind. Hay production had all but stopped, and yields have been 25%-50% the normal amount. Producers were cutting and baling pastures normally used for grazing due to reduced herd numbers. Crops and pastures were burning up. Stock ponds and creeks were very low. Pasture and rangeland conditions were very poor to poor. Sale barns were reporting record numbers of cattle coming through due to producers culling or liquidating. Grasshoppers and Bermuda grass stem maggots were causing a lot of damage in pastures.

Extreme drought conditions continued across the district. About 90% of the dryland cotton was a loss, and producers were filing insurance claims. About 50% of the irrigated cotton was not going to make a viable crop either. Irrigated corn seemed to be the only crop in fair condition. Cattle producers were out of grazing and relying on supplemental feed. Cucumbers were being planted and emerging according to some producers. Cattle were in good condition.

Soil moisture levels were very short to short. Scattered showers delivered trace amounts of rainfall up to half an inch. Temperatures were in the triple digits. Hot weather was drying soil. Irrigated cotton and corn were doing well with pivots running at full capacity. Corn was at stages ranging from silking to knee high. There appeared to be less cotton in the area, and fields were behind in growth stage. Producers hope sorghum hay and silage recently planted will make before the first freeze. Wheat harvest was complete with below-average yields and 50% normal yields for many producers. Range grasses were dormant, and overall rangeland and pasture conditions were very poor to poor.

Topsoil moisture throughout the district was very short to short due to the lack of rain. Heat and drought were contributing to dormant grasses and poor pasture conditions, ponds getting low, and hay getting scarce. Cattle producers began to reduce their herds due to a lack of forage. Stockyards were accepting cattle on off days in preparation for the sale to avoid lines and blocking traffic. Some soybean fields looked good, but a large percentage were being harvested early for round bale forage. Corn, cotton and sunflowers were still doing well in some places with no reports of major insect or disease issues.

Temperatures were around 100 degrees daily with overnight lows around 75 degrees. Sporadic showers fell across the district ranging from no precipitation up to 2 inches reported. Weeds were blooming in several fields. Corn was basically finished and needed to dry down. The melon harvest continued. Small acreage producers reported struggling to keep corn and watermelon alive due to poor water quality and dryness. There were reports of rose rosette, Mozena obtusa and mesquite webworms. Livestock were being sold due to poor grazing conditions. Sheep and goats may stay a little longer.

Some areas received rainfall but not enough to make a difference in the drought. Temperatures were hot and dry with most days over 100 degrees. Pastures were brown with little to no green grass. The drought was beginning to impact trees. Some corn was being harvested for silage, but the quality and yields were down. Sorghum was drying down fast, and yields were expected to be low. Some irrigated cotton looked good, but the majority was struggling in the heat as irrigation failed to meet crop water demand. The pecan crop did not look promising. Livestock were in poor condition. The local cattle auction ran about 1,000 head with at least half of that being cows from ranchers culling herds.

Conditions remained hot and dry with triple-digit temperatures. Soil moisture levels were very short to short across the district. Some spotty rain was reported with many areas catching zero rainfall and a few scattered areas receiving 1-2 inches. Some fields were saturated by rains. In drier areas, irrigation pivots were running most hours of the day to keep up with crop water demand. Peanuts were pegging, but some fields looked moisture stressed. Cotton was blooming, but some cotton fields were not expected to produce harvest-worthy yields. Some cotton fields were showing 50%-90% open bolls, and producers were applying boll openers and defoliating. Some whitefly pressure was reported along the river. Corn and sorghum harvests were underway and nearing completion in some areas. Irrigation canals continued to provide water to watermelon and cantaloupe fields. Irrigated Coastal Bermuda grass was producing good bales, and irrigated pecan orchards were in good shape as well. Citrus and sugarcane continued to receive irrigation. Rangeland and pasture conditions continued to decline but should improve in areas that received decent moisture. Hay fields were being prepared for the next cutting in some areas, but bale production was down dramatically overall, and supplies were tightening. Producers were feeding hay and supplements to cattle, and feed and hay prices continued to climb. Local beef producers were thinning herds or liquidating completely, and sale barns were reporting high volumes of cattle being marketed. Prices were steady, but early weaned calves weighing less than 300 pounds were lower. Food plots of sorghum and sunflowers were failing.