Slideshow: The new Kernza variety, MN-Clearwater, will be grown for seed production in three regions with water quality concerns. 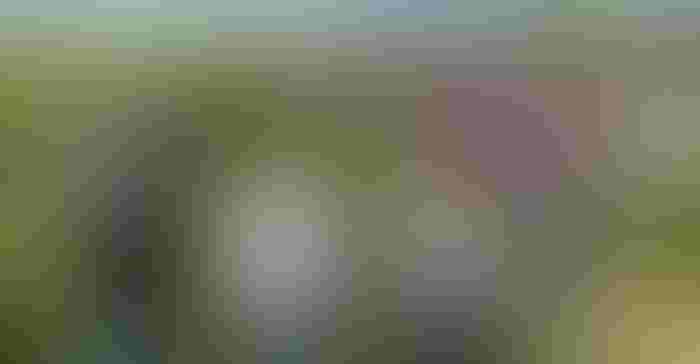 This summer is a noteworthy season for Minnesota’s new intermediate wheatgrass.

MN-Clearwater, released earlier this year by the University of Minnesota Forever Green Initiative, will be planted by licensed growers sometime in mid- to late August.

“2020 is a bit of a turning point year as we went through our first year of seed increase,” says Colin Cureton, supply chain development specialist for the Forever Green Initiative.

There is enough seed to sow another 1,000-plus acres of Kernza, mostly in Minnesota. The Land Institute in Kansas, which owns the Kernza trademark and has led research on the crop since 2001, is also scaling its seed supply so there might be a 100% or more increase in global Kernza production this year, Cureton adds.

“This is not saying much in terms of total acreage, but in relative growth it is very significant,” he says. “The next few years will be an important period of growth for Kernza that determines whether we can establish a reliable supply of grain for end-users at even a modest scale.”

Growers, environmentalists and scientists have been interested in both agronomic and marketing development of the perennial multifunctional crop.

MN-Clearwater was developed after eight years of breeding, testing and seed production in Minnesota environments using germplasm provided by The Land Institute. U-M researchers sequenced the grain’s genome and increased average yields by 5% to 10% per year and reduced lodging.

With its extensive root system growing down 10 feet or more, Kernza captures fertilizer, thus reducing nitrate leaching by 86% or more when compared to annual wheat. That dense root system also helps with water infiltration, reduces weed competition, minimizes the need for tillage or herbicide and helps sequester more carbon. Plus, as a perennial, the crop provides year-round soil coverage and reduces erosion.

U-M food science research continues to look at quality traits and ways to store, process and use Kernza in commercial foods. A number of food companies, such as General Mills and Patagonia, like the environmental marketing aspects associated with the grain.

Currently, 20 farmers are growing about 400 commercial acres of Kernza in Minnesota, and efforts are underway to expand certified seed production in the state.

Thanks to a $500,000 investment in Forever Green from the state legislature last session, a pilot program will focus on developing commercial scaling of Kernza in three regions — in the southeast, south-central and southwest. Priority will be given to plantings on Drinking Water Source Management Areas to aid in efforts to improve water quality. Participating growers will receive compensation of $25 to $50 per acre, depending on nitrate leaching reduction, and an additional payment of up to $175 per acre to cover economic risk.

Cureton says he is still talking with interested growers one-on-one. Seed distribution will take place in August, with seed available for pick-up or shipping to certified growers from Minnesota Native Landscapes in Otsego.

Carmen Fernholz, Madison, was the first farmer in Minnesota to plant Kernza in 2011, starting with 2 acres. Last summer, he hosted visitors on his 360-acre organic farm for a field day to learn about the crop and to sample foods and a beverage made with the grain. His Kernza stand was up to 15 acres.

“Our 2019 harvest went great and we had what appears to be one of the best yields in Minnesota — 750 plus pounds per acre,” he says.

Currently, 500 pounds per acre is considered an average yield.

“We planted an additional 20 acres in August of 2019 and both fields [in late June] look excellent,” he adds.

Fernholz has been experimenting with various agronomics practices, including the best way to harvest Kernza. Last year, he worked with university researchers on other acreages across the state to test three different methods. On his farm, they windrowed the grain and used a belt pickup head to harvest a day later. At a second site, they straight-cut the grain using a draper head. On the third site, they straight-cut using a stripper head.

“Harvest method was perhaps the biggest lesson learned last season,” Fernholz says. “Of the three methods, the stripper head appears to be the best option.”

He notes there was less potential for seed shatter, grain is cleaner because less of the plant goes through the combine and remaining stubble can be baled.

“Grain can go from too green to ready-to-harvest in a matter of three to four days,” he adds. “This is another reason why the stripper head may be the equipment of choice as it allows for a more flexible just-in-time harvest.”

Fernholz encourages farmers who want to learn more about Kernza to contact him directly at [email protected] or 320-598-3010. Better yet, interested farmers can join a free virtual field tour hosted at Fernohlz’s farm on July 22, at 12:45 p.m. Fernholz and other speakers will discuss planting, harvesting, post-harvest storage, economics and marketing.

While Kernza offers soil health and water quality benefits, the novel grain must have a marketing niche to convince farmers to grow it. At Fernholz’s field day last summer, participants were treated to a light meal that featured a Kernza salad, a Kernza snack and Kernza beer.

A small-scale grain processing equipment builder, Sprowt Labs in Burnsville has been working with Carlson, Cureton and the university to build a supply chain infrastructure for cleaning, dehulling and milling Kernza. They recently launched a direct-to-consumer company that sells Kernza grain and flour, called Perennial Pantry.

Co-owners Christopher Abbott and Brian Hedberg are the first business owners who are directly working with farmers to buy their grain, clean it and sell it.

“As I work with new brewers, distillers and bakers to encourage them to try and buy Kernza, I can send them to Sprowt Labs to purchase grain,” Carlson says. “It's a huge step in Kernza marketing and sales.”

Another marketing highlight is the return of Kernza crackers sold by the Columbia County Bread and Granola in Danville, Penn. The company has made Kernza crackers before but discontinued production because of inconsistent grain supplies. It also is working on a sprouted Kernza bread.

“We’re working to get the crackers distributed in Minnesota, especially since the current batch was made from grain grown by Carmen [Fernholz],” she adds.

To learn more about MN-Clearwater, go online and visit the Forever Green Initiative or Kernza.