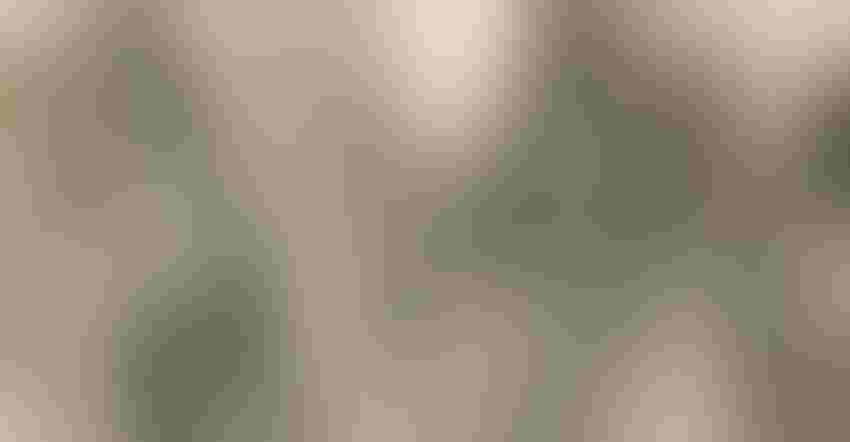 Wheat from a dryland variety trial in Bushland shows a range of injury from freezing temperatures in mid-April. Texas A&M AgriLife Extension Service by Jourdan Bell

Areas, where temperatures dipped below freezing, are assessing damage and will continue, Trostle says. Freeze injuries have varied widely across the South Plains and Panhandle, he adds.

The question will be “how bad” freeze injury could be and whether it might hurt yield potential enough that producers decide to cut fields for haylage rather than risk subpar grain production.

Temperatures in Lubbock reached 31 degrees April 15, which is 10-11 days later than the average final freeze date, he says.

Trostle said one grower in Decatur called with questions about freeze damage, but that it was limited to the top one-third of the grain head. The damage occurred before the flowering stage and will likely only affect about 5% to 10% of the yield.

“It’s a situation where yes, there was some damage, but losing the top of the grain head at that point in the plant’s growth process probably won’t hurt the overall yield much because the remaining grains will be larger since they will have less competition for nutrients.”

“It can be 30 degrees, but it might be 33 degrees in the canopy,” he says. “There might be reports here and there, but nothing major to be concerned about, so far.”

“It’s hard to guess the extent of the damage, and I am not ignoring the fact that it will impact many producers to various degrees, but we probably won’t see losses of more than 10% across the region because wheat was at varying stages of development,” she said. “There were four counties that probably have injuries to 50%-60% of their fields including leaf burn and injury to grain heads.”

Bell says those counties were primarily in the southwest Panhandle where wheat was further along and more susceptible to low temperatures. There was significant leaf tip burn and bleached awns, but of greatest concern are fields with splitting stalks, swollen internodes, damaged spikelets, and grain. Many producers in that area who were concerned about injury either cut wheat last week for hay or silage or they will be doing so in the next few weeks.

“Fields in the northern areas may see fewer injuries because they weren’t as far along,” she says. “Fields in later development stages were much more susceptible to freeze.”

Emi Kimura, AgriLife Extension agronomist, Vernon, said she saw intermittent damage to wheat during drives around her district. Weather stations in her district reported lows of 30 degrees for 5-12 hours.

A recent clinic for wheat growers regarding freeze injury delivered more details about how low temperatures affected some fields.

“Freeze injury on the single side of the three-sided wheat heads indicate that side was colder,” she said. “The injury to the top and bottom of the heads indicates the more immature kernels were damaged. Wheat heads grow from the center, so the top and bottom of the head aren’t as far along and therefore more susceptible to freezing temperatures.”

Kimura says most of the growers at the clinic reported higher rates of damage in low-lying areas. In some cases, freeze injury was limited to low spots within hundreds of acres while other lowland fields were severely damaged throughout.

“The injury was very inconsistent, and there are still a lot of questions regarding how those injured fields will perform going forward,” she says. “They could recover and produce well or continue to decline.”

Kimura says other conditions like moisture, sunlight and disease pressure could make or break some wheat fields. She said conditions have been drying in her district and rust has been more of a problem than freeze damages.

“Producers really need to stay on top of wheat rust if they plan to take their fields to grain harvest,” she says.

The district continued to receive scattered rains. Small grain forage harvest continued. Frost two weeks ago set Bermuda grass back and hurt grazing. Goat and sheep markets trended up. Corn was starting to yellow due to excessive rainfall, and hindered producers from planting before the April 15 insurance deadline. Producers were cutting hay and fertilizing. Livestock were in good condition. Cotton planting began but was slowed by wet conditions. Forage producers were scouting for armyworms and started to cut hay. Nearly all counties reported good soil moisture and good overall crop, pasture and rangeland conditions.

Conditions were windy, hot and humid with no rain. Topsoil moisture continued to decline. All crops and forages were showing stress from lack of moisture. Cotton was emerging and doing well, but rain was needed for continued growth. Some wheat was being harvested, but most wheat and oat harvests should begin next week. Early planted sorghum was at boot stage or starting to head. Early planted corn was tasseling. Little forage had been produced since the spring green-up. The quantity of forage was declining, but quality was still good. Livestock were in good condition. Cattle prices were a little lower, and inventories were still high. Pecan nut casebearer spraying was taking place this week.

Rainfall and storms added to already saturated soil in many areas. Cherokee County reported quarter-sized hail. Polk County reported damage to timber due to an F-3 tornado. Producers were increasingly concerned the first cutting of hay may be delayed until late June due to rain. Ryegrass looked promising but was too wet to work. Pasture and rangeland conditions were good. Subsoil and topsoil conditions were adequate to surplus. Livestock were doing fair to good. Cattle prices were up slightly. Houston County received several calls regarding fly control. Wild pigs remained a constant problem in hay meadows and pastures.

Farmers prepared for spring planting. Corn planting should start soon. Other producers were plowing winter wheat under to get prepared for cotton planting. Warmer temperatures and windy conditions caused topsoil to dry. A few wheat producers were reporting their fields were damaged by freezing temperatures a few weeks ago. A few fields showed very minor freeze damage that should not affect yields. Many wheat fields were beginning to head. Cattle were in good condition.

Parts of the district received rainfall. Topsoil and subsoil moisture were short to adequate. Pasture and rangeland conditions were poor to good. Winter wheat was fair to excellent. Northern parts of the district reported no damage from freezing temperatures while central areas reported damage to 30%-90% of wheat. Some wheat was being cut for hay or chopped for silage. Corn was being planted, and other producers were gearing up to plant. Most cow/calf producers ceased supplemental feeding as range conditions improved. The southern region reported short topsoil moisture and short subsoil moisture.

NORTH: Topsoil moisture levels were mostly adequate. Temperatures were in the upper 70s but cooled. Areas reported 1-2 inches of rain. High winds and hail were reported. Ponds were full. Winter wheat was doing well and entering the heading stage. Corn was emerging and doing well. Warm-season perennial pastures and hay meadows were greening up. Some ryegrass was harvested for hay. Livestock were in good condition, but flies were causing challenges. Armyworms were reported.

High temperatures were in the mid-90s with lows in the mid-50s. No precipitation was reported. Winter wheat was being cut, baled and stored. Producers should begin planting cotton soon. Planting should gradually pick up over the next two to three weeks. Wheat was maturing, and many fields were into the dough stage. Corn and sorghum looked good. Pecan trees were blooming. Pecan producers were applying foliar zinc sprays. Producers were busy working lambs and goats. Livestock were in good condition, though producers continued to provide supplemental feed. A 24,000-acre wildfire broke out along the Crockett-Val Verde county line.

A dry, warm week allowed haygrazer planting to continue. Some producers began cutting and baling oat and wheat fields to replenish exhausted hay stocks. Pecans were progressing nicely. Weed management continued to be a priority as warm season grasses were beginning to grow. The district needed rain to improve rangeland and soil moisture conditions. Livestock were in fair to good body condition overall.

Daytime conditions were warm with cool nights. Areas received spotty to no precipitation. Cool-season vegetation was beginning to mature. Warm-season grasses were emerging and looked good. Fertilization and weed control in pastures continued. Some hay pastures were being cut. Milo and corn were planted. Cotton was starting to emerge. Livestock conditions remained good. Many producers were facing difficult decisions amid the ups and downs of the market. Wildlife were in good shape.

Weather was mild with very short to adequate soil moisture levels. Temperatures were above 90 degrees daily. Conditions were favorable for planting and forage production. Pasture and rangeland conditions were poor to fair. Corn and sorghum continued to grow. Dryland sorghum showed signs of drought stress. Cotton planting continued. Additional rain would help newly planted cotton emerge. Vegetable and strawberry producers were harvesting. Red potatoes continued to be harvested. Native bunch grass improved. Drought conditions worsened by the day. Irrigated fields and crops like pecan orchards, Coastal Bermuda grass and vegetables were in good condition. Wheat and oats were all headed, but many producers indicated yields may not justify harvesting costs. Onions harvest in Hidalgo County was almost done, and the crop made good progress in other areas, with some fields 10-12 days from harvest. Producers in some areas were still hauling water, feed and hay. Herds were being culled. Sunflower fields looked good, and sesame had already emerged in most fields. Sesame was still being planted in Hidalgo County.