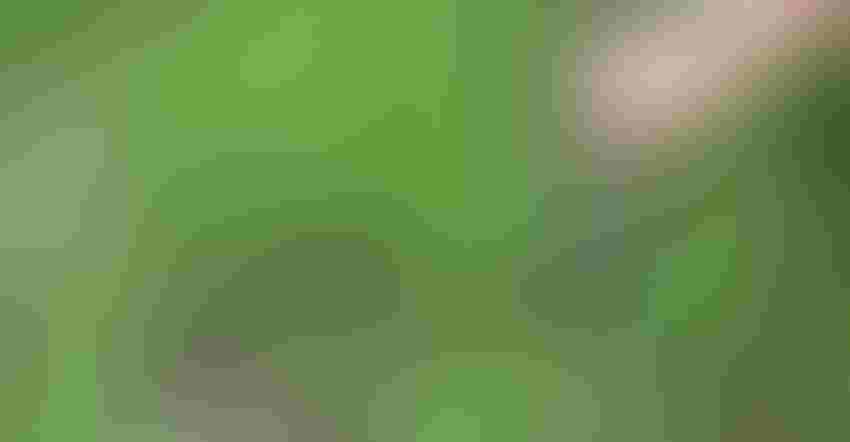 FIGHTING FOR LIGHT: The young soybean plant growing among these Canada thistles is stretching to find light. In doing so, it is growing taller, but not adding nodes. That will cut yield. Tom J. Bechman

If your soybean field looks like a hayfield from a distance during the first or second week of June, it may mean you have a problem. What you’re likely seeing are weeds, headed by giant foxtail but likely also including some broadleaf weeds. Even if there is a good stand of soybeans among those weeds, damage to yield potential could already have occurred.

“We really need to do everything we can to get an early start on weed control and keep soybeans clean from the start,” says Steve Gauck, a regional agronomy manager for Beck’s, based near Greensburg, Ind. Beck’s sponsors Soybean Watch ’21.

Purdue University Extension weed control specialists conducted studies years ago that showed the more weeds per foot growing with soybeans, the bigger the potential yield loss. It varied somewhat with the type of weed, but the message was the same: Weeds cost yield.

Gauck visited the Soybean Watch ’21 field while soybeans were at the V1 growth stage. At V1, only the first trifoliate is completely unfurled. The field was no-tilled into cornstalks on May 15.

The first thing Gauck noticed when entering the field was a small patch of Canada thistles growing on the end rows. Overall, weed control was good because the grower used a burndown and applied a residual herbicide as well. However, weeds like Canada thistle can still break through, especially in patches.

“I found a soybean seedling growing next to a much larger thistle plant, and examined it carefully,” Gauck says. “What stood out was that there was a long way between nodes on the stem.

“When I compared it to another plant growing without thistles nearby, it was even more obvious. The nodes on the weed-free plant were closer together, and there were already more of them.”

When soybean plants must compete with weeds while they are small, they tend to grow taller more quickly, trying to outcompete the neighboring weeds for light. When they grow taller quickly, the distance between nodes is greater, Gauck explains. The overall effect on the plant is that there will be fewer nodes.

“Fewer nodes per plant means less yield from that plant,” he says. Each node is a potential host for multiple soybean pods. If a plant has fewer nodes, it is most likely going to have fewer pods.

“That’s the same reason we don’t worry if the plant population is at least 80,000 plants per acre, as long as weeds are controlled,” Gauck says. “Thinner stands tend to branch more, and more branches means more nodes and more pods per acre. In most situations, that means more yield.”

The quest to increase the number of nodes per acre is also behind the move toward earlier planting for soybeans, Gauck says. “Soybeans planted early tend to produce more nodes per plant than the same variety planted later. Planting earlier produces more nodes, but so does preventing competition with weeds.”