The technology was highlighted at the 2022 International Congress on Hazelnut in Corvallis, Ore. 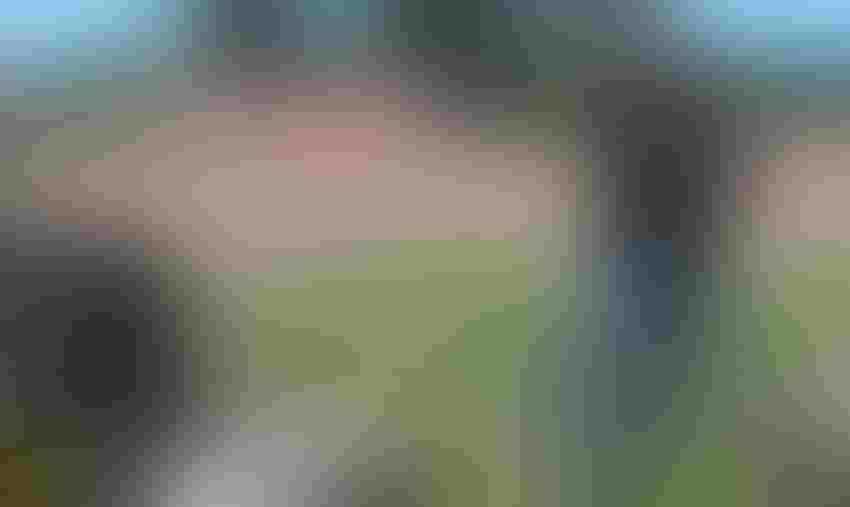 Marcelo Moretti demonstrates electric weed control at a past Oregon Blueberry Field Day at OSU's North Willamette Research and Extension Center in Aurora, Ore. Moretti is working on the technology for use in both blueberries and hazelnuts.Mitch Lies

Hazelnut growers looking for weed control options may soon be able to throw a new option in the mix. According to a presentation at the 2022 International Congress on Hazelnut, held recently in Corvallis, Ore., electric weed control could be a viable option in the future.

“I would say it is very effective for the weeds that I am targeting,” said Marcelo Moretti, an assistant professor at Oregon State University, who has been experimenting with the technology in hazelnuts for two years. “It is safe to hazelnuts the way we are using it, and it is very compatible with our production system because we want bare ground; we don’t have anything that is combustible on the ground most of the time.”

“We are seeing Italian ryegrass escaping quite a few of the herbicides that we have for post emergence,” he said. “For example, paraquat and glufosinate applications are often ineffective because of this resistance issue.”

Having first been patented in the 1890s, electric weed control is not new, Moretti said, but the technology was largely scrapped with the introduction of relatively inexpensive herbicides in the 20th Century. Still, it has been commercially available on a limited basis in the U.S. since the 1970s in the form of an electrified single metal bar that is driven over a crop and electrocutes weeds that touch it.

“So, it is possible to use that in annual crops, but it would never fit in orchards,” Moretti said.

More specifically, the technology uses power generated by the PTO shaft to drive a generator that converts mechanical energy into electrical energy that is then distributed to a converter that transforms low voltage currents into high voltage currents. Electrodes on the application equipment then channel the energy into the plant.

Moretti has found that different weeds respond differently to the electrical currents. “The bigger the plant, chances are it will be harder to kill,” he said, “and grasses seem to be harder to kill than broadleaves. It could be because of their root system or because they have a different leaf architecture that makes them not good at conducting electricity.”

Still, in studies in hazelnut orchards, when combined with a second treatment, the technology has been effective at controlling grass plants. “Two days after treatment, you see wilting,” he said. “A week later, you can see a progression of necrosis and wilting. And two weeks later, most of the plants are controlled, but there are tillers within those grasses that are not dead and are coming back.

“Regrowth (of grass plants) was noted in nearly all cases, and a sequential application was needed,” he said.

Moretti has found that electric weed control is generally more effective on broadleaf weeds, such as Canada thistle, yellow nutsedge, field bindweed and horsetail, than on grass weeds. “Horsetail was the most sensitive,” he said. “At speeds of 6 kilometers an hour, this thing was gone. And they were tall plants.”

In all cases, he said, the technology was safe on hazelnut plants.

The technology requires a tractor of at least 85 horsepower to generate enough power though the PTO to develop the voltage necessary to control weeds, Moretti said. The applicator that he is using, which is attached to the front of a tractor, treats 4 feet at a time with two 2-foot sides. A mobile extension on the applicator will move in close to the tree trunk when needed, he said, but the machine lacks the type of flexible extender needed to control weeds in the row.

In his research, Moretti found that operating the tractor at lower speeds resulted in faster and better weed control. Regardless of the speed, however, plant density was reduced significantly after a single application.

The technology’s biggest drawback, Moretti said, is its propensity to start a fire.

“In a dry orchard, you can start a fire very fast, which tells me there is a time of year where we should be using it,” he said. Moretti expects the technology’s best fit is for spring and fall weed control in crops that do not have much material that can ignite.

Moretti believes the technology is cost effective, noting the application equipment cost about $60,000 when he purchased it two years ago. “I think it is competitive when applied to specific targets,” he said. “It may not be a solution for you for trunk-to-trunk application. But for the hardest weeds to control, it might be very viable.”

Among other benefits, the technology can help growers avoid issues with maximum residue levels of herbicides, or MRLs, which can be an issue when exporting product. “When you start to look at certain markets, just meeting those (MRL) targets can be an issue,” he said.

To date, outside of his experiments, Moretti doesn’t believe the technology has been used in hazelnuts, and more work will likely be needed to ensure electric weed control is a viable option for the industry. “Everything looks good so far, but it takes time for us to be certain,” he said.

Companies producing the technology include Zasso, of Switzerland, which markets its electric weed control as ElectroHerb and offers machines for viticulture and orchard applications. Moretti has been using the Zasso machine in his experiments.

RootWave, out of the United Kingdom, markets an electric weed control machine as Volta and plans to release a commercial version of the machine in the U.K. and Europe for fruit crops and row crops in coming years, according to company literature.

Crop.Zone, out of Germany, utilizes a light saline spray to increase plant conductivity as part of its technology. The Crop.Zone system includes two attachments, a standard sprayer fitted at the front of the tractor and the company’s electrical applicator, which is fitted at the rear of the tractor. Crop.Zone was planning to release its system in 2022, according to company literature.

The companies have yet to introduce the technology into the U.S., but Moretti said they plan to do so.

Mitch Lies is a freelance writer based in Oregon.