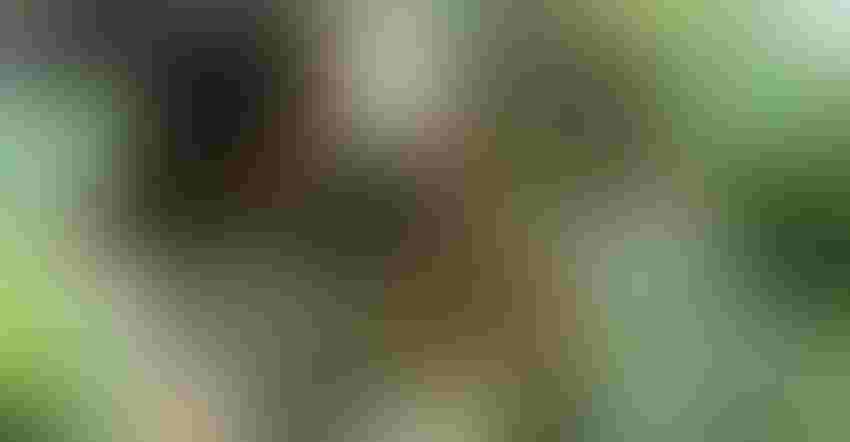 Bacterial spot in almonds, a new disease in California.Brent Holtz/UCANR

The proverbial saying, ‘Every cloud has a silver lining,’ applies even when there aren’t enough clouds. Take the drought – please.

That prediction comes from Jim Adaskaveg at University of California, Riverside — backed by his cohorts at UC Cooperative Extension San Joaquin and UCCE Stanislaus. The researchers have been looking at the scourge since bacteriosis was first discovered in 2013 in almond orchards, primarily of the Fritz variety.

In a management report for University of California Agriculture and Natural Resources, the authors warned that the new disease was found “in high incidence” in some Sacramento and northern San Joaquin Valley almond orchards, “hitting the Fritz cultivar especially hard and affecting Nonpareil, Butte, Carmel, and Monterey at lower levels.”

That’s where the warmer and dryer climate conditions become a positive. “Last year, overall environmental conditions were not favorable due to low rainfall,” Adaskaveg says, anticipating similar conditions this year. “This is a warm-weather disease that likes warm weather in the 65-70 degree range but doesn’t like it when it gets in the 90s and above.

“We tend to see epidemics across the board when we have lower temperatures and higher rainfall in the spring and while we had some light rains during that period, diseases like this one need a jump start via multiple rains to get them going.”

But there is a caveat.

“Some growers still have older impact sprinklers, the ones that stream water instead of sprinkling it, and when that stream of water from the sprinkler head hits the trees, it acts like a rain. People with those types of irrigation systems always have a problem, even in drought years, when they start running sprinklers in May, June, and July. It’s a big ask for growers to consider converting out their sprinkler systems, but in those older type orchard irrigation systems, that’s where we see the disease year after year.”

Bottom line according to Adaskaveg — “In my research trials, in places where there were older sprinklers, there was a problem. But we don’t expect it to be a big one this year.”

When it comes to treatment, UC IPM Pest Management Guidelines for Almonds recommends both delayed-dormant and in-season applications of copper products and mancozeb to protect immature, developing fruit.

“There are no reports of copper resistance in populations of this pathogen in California,” they report, advising: “Low rates or reducing rates of copper with each application are effective strategies to prevent copper phytotoxicity to almond leaves. Rotate or mix copper applications with other modes of action when possible.”