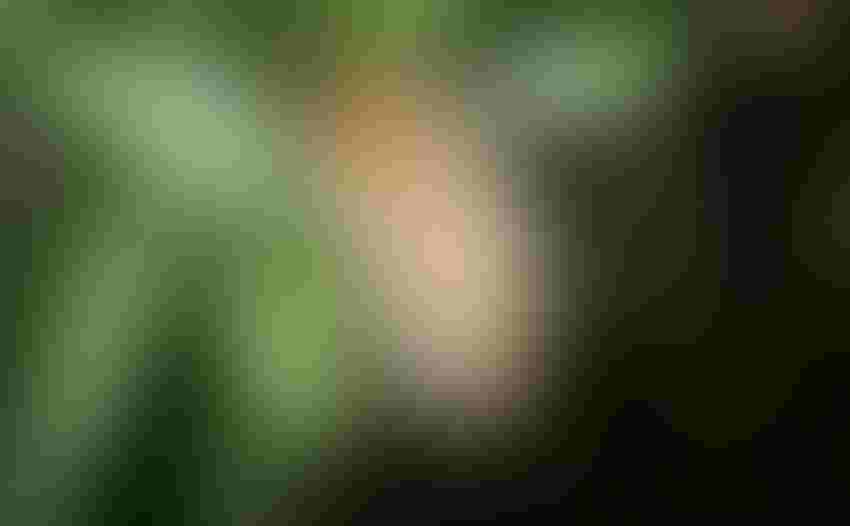 Almond husks, or hulls, naturally split open as the nut matures on the tree. This opening makes it easier for navel orangeworm larvae to find their way to the nutmeat inside.USDA ARS

In bowling, keglers call the 7-10 split the most infamous of splits, dreaded because only a skilled kill shot can take out the remaining pins.

According to the Almond Board of California, in their industry, hull split holds a similar dread because precise knowledge of when it begins unleashes a concentrated pest management procedure.

When hulls split, a scent is released that attracts female Navel Orangeworm moths to lay their eggs on the splitting hull or for peach twig borers to invade or hull rot fungi spores to spawn infections. Missing the onset of hull split and allowing those pests to gain a toehold can wreck a grower’s season.

Hulls split as the fruit ripens and that timing fluctuates based on a variety of issues, but the nonpareil typically splits earlier than other varieties, generally in early-to-mid July although the actual timing depends on not only the variety, but weather conditions, frequency of irrigation, soil type, and other factors.

One practice recommendation involves controlled water management during the period approaching hull split which will encourage the majority of developing nuts to be in sync and split as quickly as possible.

To determine if hull split has occurred, look all the way to the treetops where nuts mature at a faster rate. Use pole pruners to cut small branches from the top southwest portion of half a dozen trees to see if hull split has begun. Split can be determined by squeezing the end of the hull — if the suture opens up and exposes the shell inside, it’s time to spray.

The annual battle begins with an opening salvo, a warning shot in the form of kernelless blank nuts whose hulls are traditionally the first to split, days ahead of those with full kernel. Nuts at the top of the canopy and trees on the edge of the orchard often ripen first.

“Don’t just rely on one method, use as many tools as possible from your IPM toolbox,” says Yaghmour, who advises Kern and Kings county growers.

During hull split, the cracked hull represents an entry point for air- and soil-borne fungi attracted by the water and nutrients in the hull. Once inside, the pathogens release toxins affecting the spur, the fruiting wood on which the hull hangs.

“Hull rot isn’t a threat to the current year’s crop, but does affect the shoots and twigs that will produce next year’s nuts — and impact grower yield the next crop year,” Yaghmour advises.

Early morning or dusk are the recommended spraying times as the heat of the day will evaporate the spray, wasting time, money, spray material, and not achieving the necessary coverage to battle crop damage.

This isn’t a time to cheap out by spraying just every-other-row. There are two sides to the tree and both need to be sprayed.

UC Integrated Pest Management experts recommend shaking a few trees to determine if nut removal time has arrived (when 95% of hulls have split) and harvesting almond crops as early as possible in order to reduce the amount of time the crop will be exposed to pests or encounter additional complications caused by early rains.