The vision systems, sensors and artificial intelligence at work in that new machine netted the company an Innovation Award from the global event 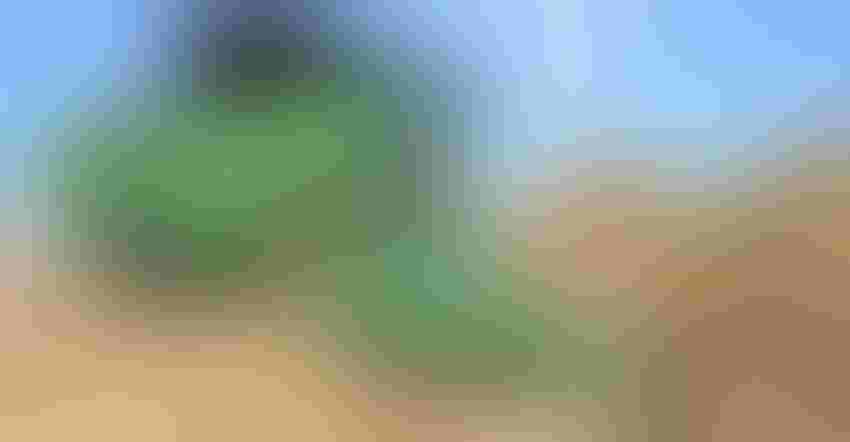 TECH HONOREE: The X9 is John Deere's newest, biggest and most advanced combine, and an independent panel at CES, the global technology exhibition, recognized the machine for its vision, sensor and artificial intelligence technology with an Innovation Award.Willie Vogt

An event known mostly for consumer tech has recognized John Deere with a major award. The company has been honored with a 2021 CES Innovation Award, which recognizes outstanding product design and engineering in consumer technology products.

The Innovation Award honor goes to a product that scores above a specific threshold during the judge's evaluation and the 8RX was an honoree in 2020 in a category CES called Tech for a Better World. This year the honor is for the same award but named for Robotics and the X9 is also an honoree. The X9 is being recognizd for its use of artificial intelligence and its ability to monitor itself and enable farmers and service technicians to manage issues remotely.

Long held in Las Vegas, the 2021 CES – once called the Consumer Electronics Show – will be a virtual program.

Companies apply for recognition at CES, but an independent panel decides what to honor. Caes explains that the application process involves making sure even a non-aggie can recognize the innovation involved. "We do the same thing for the application that we really do for CES. CES is not primarily an ag-familiar audience. We're focused on showcasing the technology," she says.

In the application, to make it clear to a non-aggie, the conversation focuses on that vision system and the sensors involved. And how the artificial intelligence is deployed to meet a farmer's need for a clean grain sample in real-time during harvest.

"We use terms like sensors and cameras in the application, so the panel can say 'Oh, I know what a sensor is,'" Caes explains. "We're doing the same thing in our exhibit. This is a different audience for us."

Honorees of Innovation Awards at CES can showcase their product in a special room at the Venetian Hotel (when the show was live). In 2020, Deere had considered bringing an 8RX in, but learned that the room couldn't handle the weight of the tractor, so a toy was showcased instead, with an iPad in the exhibit showing the real tractor at work. "We didn’t want people to think we won the award for the toy," Caes smiles.

2021 will be the third time John Deere exhibits at this global event. The idea is to showcase what John Deere had, but Caes says there was a bigger mission – to show those outside of agriculture what we use to raise food. And the company is gearing up for the virtual event.

"CES is full of technology and prototypes that haven't come to market yet," she says. "In our case, we're showcasing advanced technology that farmers are using today. That was a shock to some visiting our booth."

A smile comes to Caes's face when she talks about Deere folks working the live exhibit and answering questions. In 2019, the company had a combine in the exhibit showing harvest technology at work. And there was a live demonstration in the parking lot of an AutoTrac system and a self-driving course.

A common question at the time was "When are you bringing this to market?" Of course, the answer was that the tools had been in use in some form by customers for several years.

In year two, the company brought in a full-size sprayer with a 120-foot boom. The questions then were not only about the sprayer and the technology, but musings about how a farmer drove the sprayer down the road with such a wide boom. They did not fathom that the sprayer boom could fold.

"It's a different audience at CES for sure," Caes muses.

And for year three, things will be different. Caes did say that if the show had been held the focus would not have been the X9. "We're looking at the crop from the ground up," she says. "We want to show how important the seed is to the farm."

Going virtual in a big way

The virtual CES is offering exhibitors access to the global audience in a new way. Microsoft is hosting the event and is on record saying that a virtual event can't just be a copy of a physical event. How that will look remains to be seen, but Caes says that John Deere is ready.

"We're developing a micro site that will allow visitors to look at our technology," she says. "And for some key visitors we're providing Oculus virtual reality goggles so they can really get a perspective of how things work."

Non-Oculus-owning visitors can see a video of what the virtual reality folks will see. And it will take you from seed in the planter into the ground and beyond. The aim is to show the latest in planter tech from a seed's eye view.

"And we're going to have a game people can play that shows them how different factors can affect the crop," Caes says. "They make decisions about planting their crop and then we run the scenario to show them the result."

She adds that Deere can't cover every scenario for the game but visitors trying their hand at planting can choose planting time, population, crop and other factors, then run the scenario. The idea is to show the many factors that can impact how food is grown for an audience with little ag knowledge.

The Deere microsite will be linked to CES but be open to the public beginning Jan. 11. The CES John Deere page will only be available to those registered to have access to the big virtual event.

You can check out all the CES Innovation Award honorees online