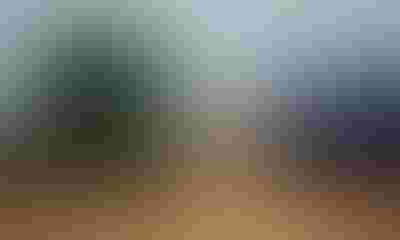 Corn and soybean harvests trail their five-year averages as rain and humid conditions have at time sidelined combines.

“Many farmers reported waiting for crops to dry down in the field before harvesting and concentrating on corn rather than soybeans,” the Iowa report said.

Corn and soybean harvests trail their five-year averages as rain and humid conditions have at time sidelined combines.

Nationally corn improved 1 point from a week ago to 74% good/excellent while soybeans were unchanged at 74%. As a result, Farm Futures calculates about .4 bpa was added to the average corn yield. Farm Futures calculations show little change in the overall soybean yield.

Harvest in Indiana also was slowed by rain, but above-normal temperatures helped dry fields. However, there were instances of the season’s first frost. Indiana’s corn harvest was at 52% versus the 44% average while soybeans were at 54% versus the 54% average.

In Kansas, winter wheat was 73% planted and 47% emerged, which trailed the five-year averages. Statewide topsoil moisture declined to 9% surplus and 72% adequate from last week’s 12% and 73%.

Nationally, sorghum was 57% harvested versus the 49% average.