A pest known mainly as a problem on corn in Missouri is back for a second year as a soybean yield killer in some parts of the state.

Whether you call it corn earworm or soybean pod worm, it is an insect to be reckoned with. University of Missouri Extension specialists recommend scouting soybean fields now to prevent it from chewing away your profits. 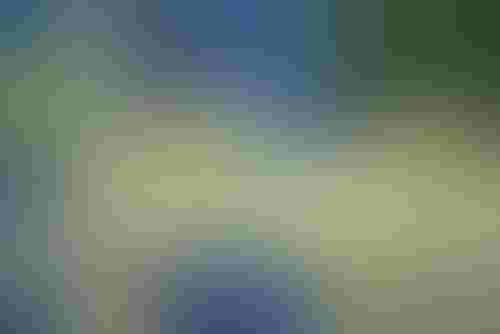 Pod worms are being spotted in Missouri soybean fields this summer. They can defoliate as well as damage pods on soybean plants.

"If pod worms are high enough in number they will take off all the pods in a field," said MU Extension entomologist Wayne Bailey. "Last year in Chillicothe, we saw pod worms come in and defoliate for a while, then move to the pods and cut them off," he notes. "Sometimes they will feed on the bean within the pod first before cutting pods off, then once they defoliate most of the plant they will eat the pods off the ground. They wiped out some of the fields for 100% loss."

Scouting right now is critical because many soybean fields, especially those planted later, are either in flowering or pod-fill stages. These worms occasionally feed on flowers but prefer soybean pods and foliage. Holes in the side of a pod can indicate pod worm has been enjoying a tasty meal.

When the same insects are found on corn, they are called corn earworm. If you peel back the green shucks on an ear of corn and see a worm chewing away, it's likely a corn earworm. The pupae overwinter in fields, and additional corn earworm moths migrate to Missouri from southern states every spring. Two or three generations of the worm are born each year in Missouri, and traditionally they thrive mainly in hot, dry months when numbers of beneficial insects are lower.

The worms come in all colors -- from brown with yellow spots to white with black spots and green. Bailey says there are more green soybean pod worms this year, so to distinguish those from worms like green clover worm, farmers should look at their legs. Soybean pod worm has four pairs of large abdominal prolegs right in the center of the body while clover worm only has three pairs.

Last year, soybean pod worm got a foothold in soybeans throughout Missouri. A natural fungal pathogen normally keeps late-soybean pod worm in check in most of the state. The pathogen uses green clover worm as a host, but low numbers of that insect has drastically reduces the presence of the pathogen. That, combined with populations of corn earworm that have been building for the last five years, has allowed the soybean pod worm population to explode.

Bailey recommends treating fields if you find the insect present and pods are being fed upon by the larvae. "In this particular case it only takes one larvae per plant to take all the beans out of the pods," he says. "Even if I had pod worm in the fields that were small, not just the ones that are 1-1.5 inches long, I'd look at treating them to get them out of the field. It's economical to treat because of how much damage they can do in such a short time."

Bailey adds many foliar sprays are labeled for soybean pod worm, and your local MU Extension office or your pesticide dealer can help with that decision. "Whatever foliar spray you use, you want to keep the amount of water high when you spray so you get good coverage," he explains. "You want to do it quickly after you find soybean pod worm, because they can do a lot of damage in short order."