These ag tires may look like they are flat, but they aren't flat. They look that way on purpose. 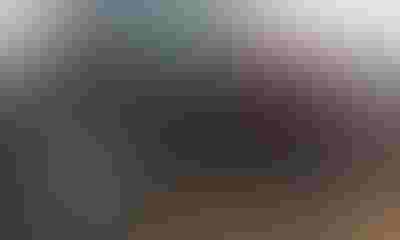 Take a close look at the picture of the tractor moving across a demonstration area below.

The driver is riding along comfortably on this tractor. And yes, he knows his tires look flat, but they're not.

Related: A tire pressure gauge will pay for itself on the farm

What he also knows is that when he crosses obstacles, such as posts, placed on the demonstration track on purpose, he will barely notice the bump in the road. His posture will stay upright. When another driver follows him shortly on a tractor with regular tires, even at low tire pressures, he will jerk rather vigorously over each post that lies in the tractor's path.

The tire that looks flat but isn't is a concept tire under development by Mitas that combines the best of tracks and tires into one package. It was first introduced at foreign ag shows, since Mitas is based in Europe.

It was also introduced in the U.S. at the 2014 Farm Progress Show in Boone, Iowa. However, the company has completed further testing and refined the design since that time.

Still not available commercially, it's advanced to the point that Mitas demonstrated its durability and smoothness of ride during the 2015 Farm Progress Show.

To make sure visitors watching the demonstration could tell how much smoother the Pneutrac tire performed, Mitas set up a giant video scan and broadcast close-ups of the driver in the cab on each tractor as he crossed over posts on the track. The difference in smoothness of ride was obvious.

Note that both front and rear wheels feature this new design. Once on the market, it could be a game changer. The footprint made by these tires is different, and it will have an impact on lessening soil compaction, developers say.