As a predominately dryland farmer, a good set of eyes coupled with a sharpened sense of timing are the keys to Curry Parker's success. 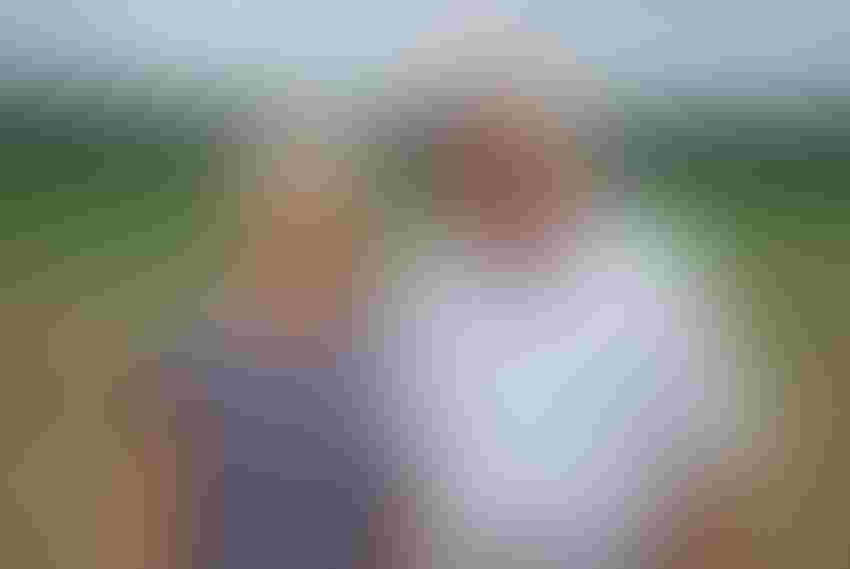 Curry Parker is married to Mary Jane. With their family, they Parkers grow about 1,400 acres of peanuts and 1,650 acres of cotton with a range in corn acres from 250 acres to 400 acres each year, and manage about 135 mama cows.

As a predominately dryland farmer, a good set of eyes coupled with a sharpened sense of timing are the keys to Curry Parker's success.

As a predominately dryland farmer, a good set of eyes coupled with a sharpened sense of timing are the keys to success. From timely rainfall to timely disease control to timely planting to timely harvest and cleanup, he expects (requires) his crew to show up on the farm ready to work – and he expects them to show up on time. The benefit of being on time is taking advantage of every window of opportunity, either planned for or unplanned for, each season avails you.

For impressive dryland yields in 2016 and for, well, his timing, Parker is the 2017 Farm Press Peanut Efficiency Winner for the Lower Southeast.

A good-humored Christian man who is quick to smile and to tell a good story, Parker is proud of the family’s operation, which he took over from his father, Billy, another well-recognized peanut farmer in the area who passed away in 2003. His mother, Joy, passed in 2013.

“Weather dictates about everything we do,” Parker said.

Not surprisingly, the operation, especially the peanut side of it, receives intense scouting. When asked who scouts his peanuts, he flatly says, “I do.”

Timely rains throughout the 2016 growing season did well for the farm, which averaged 5,023 pounds per acre. One 35-acre dryland field, which was out of peanuts for three years, reached 6,485 pounds per acre.

The Parkers work 106 fields and have 40-plus landlords to maintain good relations with. With so many fields to cover, well-timed logistics mattes. All the fields are within about a 10-mile radius of the main ‘office.’ From land prep, to planting, to in-season applications to harvest, they try to choreograph their moves in an organized circle around the farm, saving time and money on moving equipment. Most seasons the equipment-manpower dance works out.

To be timely, you need a good crew. Parker has five fulltime employees plus his wife, Mary Jane, daughter Lori Beasley who is married to Ashely, who also farms, daughter Amy Balkcom, who is married to Alabama Cooperative Extension agronomist Kris Balkcom, his granddaughter Elizabeth Folgers and his grandson Tanner Folgers, 19, who Parker is grooming to take more of the reins of the operation in due time.

“I probably spend a little more on help than a lot of other farms, but this farm is on time,” he said, adding that he is able to pay for at least one of those fulltime employees by doing custom work for others after they finish cotton and peanut harvest each fall – on time.

They start planting peanuts, weather permitting, around April 20 each year. This year due to favorable weather, they started April 14.

“When somebody gives me a calendar at the beginning of the year, I’ll turn to March 6 and I’ll write down ‘Be ready to start planting corn weather permitting.’ Then I’ll flip over to April and do the same thing with peanut and then I’ll mark down when I want to be through,” he said.

Most of Parker’s peanut acres are on a one-year out rotation with cotton, and some fields get two years out. He plants the Georgia-06G runner variety in twin-row pattern and uses Velum Total in-furrow with and additional application of imidacloprid. He soil samples and limes his fields as required adding additional gypsum as needed, too. He grows his own seed peanuts to use for his planting purposes each year.

He sticks to a 10 day to two-week fungicide program using Bravo, Folicure, Convoy and Abound, but scouts his fields regularly and if it turns off dry “we’ll park the sprayers as needed,” he said.

For weed control, he uses Sonalan, Strongarm, Valar and 2,4-DB, and they still run the row middles with a cultivator prior to lapping, something he says most folks don’t do anymore, but it pays off for them because it loosens up compacted soil and that make for better digging. They’ve used RTK technology to harvest peanuts in the last few years, loading semi-trailers in the field. He says his marketing strategy hasn’t changed much over the years: he tries to market a third of his crop before or at planting, a third midseason and third in the fall.

Being a dryland farmer means every year isn’t going to hit, drought and other adverse weather has made some crop years not worth the harvest. He has seen far too main fields over the years come up zero or with only a few hundred pounds to the acre. “Seems like every year that ends in a zero was a we shouldn’t have farmed,” he said, referring to 1970, 1980, 1990, 2000 and 2010. “But you never really can afford to sit out a year.”

When asked where he sees the operation in the near or long-term future, Parker thinks about the past. He thinks about his father, Billy, who at 19 started farming the land nearby with two mules in 1947 and a year later saved enough money to buy a small tractor. He thinks about how technology and markets have changed over the almost five decades he has grown peanuts in and around that same land his father did, and he expects things will continue to change, but he might be eyeing those future changes from more of a distance.

“I certainly want to see it continue, but I’m going to start easing up, at least I plan to, in the next few years, and that’s where it’s good to have Tanner who wants take over more responsibilities, and he is, and he wants to farm, and I trust he’ll know what to do,” Parker said.

Parker isn’t going anywhere soon and he certainly won’t be straying too far from the operation he’s built with his family. Even if he does retire, his eyes, desire for timeliness and his opinions will remain present on the farm. He says it’s up to the Good Lord to retire those things whenever it’s time.