Southwest peanut crop struggles to withstand prolonged drought and triple-digit temperatures. Rain in the next couple of months could be a game-changer. 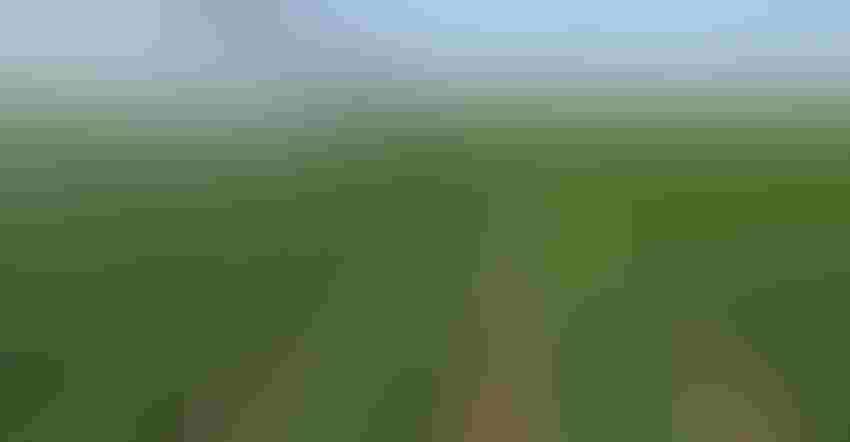 Irrigated peanuts near Wellman, Texas. Producer Kirk Martin says despite the drought and this summer's heatwave, the peanuts are "looking pretty good."Kirk Martin

Although Southwest peanut acreage is nearly 100% irrigated, the crop will need rain, and soon, to maintain yields that have already been affected by prolonged heat and drought.

In Texas, Shelley Nutt, executive director, Texas Peanut Producers Board, says the 160,000-acre crop may have already sustained losses of 40% to yield and abandoned acres.

“If it doesn’t rain in August, I’ll change that number to 50%,” she says. “Even though Texas peanut acreage is 100% irrigated, peanuts need rain. Irrigated water contains salt and other naturally occurring minerals that are not necessarily good for a crop, and when it rains, salt and minerals are flushed out of the soil. So, even peanuts with water poured on them from irrigation are struggling.”

She says the dry, hot conditions have limited weed and disease problems. “No rain means no weeds, no diseases and no peanuts.”

Nutt says the market is mostly quiet. “I don’t think manufacturers believe the situation in Texas is as serious as it is. Other regions are also struggling. The Virginia-Carolina region, for instance, is worried about more and stronger hurricanes. The Southeast has had excessive heat, so their yields could be down some. Based on climate.gov, the entire peanut growing region is looking at hotter than normal temperatures for August.”

Todd Baughman, Oklahoma State University Extension agronomist, says the state’s 15,000 acres “are in good shape with 99% of the crop irrigated.”

But can they hold up until harvest? “Our concern is two-fold,” Baughman says. “First, will irrigation be able to hold up without help from Mother Nature?

“We have had to water harder and earlier than normal, which could affect the ability of some wells to maintain water demand through the rest of the summer.

“Second, the high temperatures are a major concern at this time. Most peanut growing locations in Oklahoma have experienced between 20 to 50 days of maximum temperature over 100 degrees. Even with irrigation, these temperatures can lead to lower flower fertilization and pod set. In many cases, we see a split in pod set (early pod set and late pod set), which can lead to delayed maturity.”

Baughman says a few issues popped up early.  “Cover crop growth was an issue this year. In many cases the cover did not get large enough. In other situations, growers delayed burndown treatments due to delayed winter weed emergence from lack of moisture. They were trying to allow the cover crop to get big enough to provide adequate cover and waiting for a day when the wind was calm enough to make herbicide applications. Mesonet reported April 2022 was the windiest on record.”

Baughman says weed control has been an issue in Oklahoma. “Many of the preemergence treatments went out in front of those heavy early-season rain events. This resulted in those applications not performing as well. Additionally, similar to the burndown applications, trying to find a calm day to make post-emergence applications has not been easy. Some producers have relied on hand labor to remove weed escapes, which has been a very costly alternative.”

He says insect and disease pressure has generally been light. “This is usually the case with disease when we have hot dry conditions like we are experiencing this summer. There is a concern for spider mites, however, anytime we have prolonged drought, but that has not been a major issue so far.”

Baughman says stands were good. “Even with the extreme conditions we experienced this year, most growers were able to achieve acceptable stands. In some cases, the rain we did receive came right after planting and was a hard, pounding rain. While this resulted in poor stands or replanting, especially on cotton, this was not the case with peanuts. Fortunately, peanuts can handle these conditions better than other crops.”

Baughman says a continuing issue for all producers is high input costs. “Production cost continues to be a concern for all producers. This essentially includes all inputs — pesticides, fertilizer, and fuel. Availability of inputs has also been an issue.”

August and September weather will be key to the 2022 peanut crop. Irrigation will need a boost from rainfall.