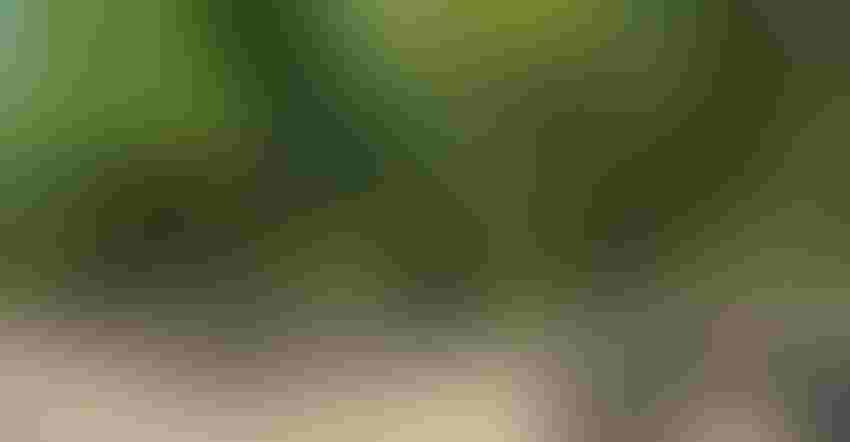 Texas producers expect above-average yields and quality from their pecan trees this season, and consumers should expect decent prices for the nut this fall, according to a Texas A&M AgriLife Extension Service expert.

“It’s not a limb-breaker of a year, although some producers may disagree, but it looks very good for most producers,” he said. “Producers with good management practices avoided pest and disease problems, and it looks to be an excellent crop in both quantity and quality.”

The early season rains helped trees, Stein said, but they also presented potential problems. Warm, wet weather was ideal for scab, which can cause lesions on the shucks and interfere with the nut fill process.

Stein said scab was reported in South Texas and other drier areas that rarely deal with the fungal disease. Some pecan varieties – like Western and Wichita – are very susceptible to scab. Susceptible trees and uncontrolled infestations can be a problematic combination for producers.

Light scab infestations cause minimal damage, but heavy infestations can devastate crops. But Stein said most producers stayed on top of it with fungicides.

Producers have also reported heavier infestations of stinkbugs, which can cause black spots on the pecan kernel, Stein said. The spots hurt aesthetics, cause a bitter taste and make marketing pecans more difficult and can result in lower prices.

However, most commercial producers maintain aggressive monitoring and control regimens for insects like pecan nut casebearer and stinkbugs as well as for diseases, Stein said.

“The first generation typically shows up in early to mid-May, and 42 days later we see the second generation, and a lot of orchards will see a third,” he said. “But we’ve not seen any real significant numbers this year, and I think it correlates with how producers stick to their control regimens.”

Despite the good crop conditions, Stein said Texas pecan orchards could use a good general rain to help kernel fill. Most commercial orchards are fully irrigated, but the water can only supplement what nature provides.

Below-average temperatures have helped soil moisture levels, but conditions are drying, and irrigation alone is not enough to meet ideal maturation requirements, he said.

“Some orchards have caught a rain here and there, but most have not gotten much rain over the last few weeks,” he said. “This is a key time for pecans, and they need water to fill the kernel and to help the shucks open as they swell.”

Stein said the tropical storm brewing in the Gulf of Mexico should deliver good rains for many pecan orchards. But there were concerns about heavy winds thinning nut clusters and damaging trees.

Early indications show the market will be better for pecan growers than the last few years, Stein said. But consumers should also be able to find decent prices for the nuts, though good pecans will likely fetch top dollar.

Stein said the trade war with China continues to have lingering effects on the pecan market. Trade tariffs jumped from 17% to 47% during the dispute and remain at that level.

“Retail prices held steady the last few years, and that’s been bad for pecan producers,” he said. “The tariff really put the quietus on the pecan market.”

The warm, dry weather allowed harvest operations to move quickly. Corn and sorghum harvests were winding down. A few fields of sorghum stubble were being baled. Most field preparation for winter forages and winter wheat plantings was complete, but dry topsoil and warm soil temperatures were not conducive for seed germination. Some producers dusted in wheat fields despite poor planting conditions in expectation of moisture from Tropical Storm Nicholas. Cotton defoliation was complete in most fields with yields in many of them expected to be average. There were concerns about potential downgraded cotton quality if the tropical system delivered heavy rains. Pastures and rangeland could use rainfall as some areas were showing signs of moisture stress. Livestock were being moved around to prevent overgrazing.

Conditions were dry, warm and windy. Some field preparation activity took place, but most farmers were waiting for rain before moving forward with wheat planting. Motley County reported wheat plantings were nearly complete. Sugarcane aphids were reported in sorghum. Rangelands and pastures were drying out, and grasshoppers and armyworms were still a problem for producers. Cattle were grazing and receiving supplemental feed. Cows and calves looked good and were making good gains. Dryland cotton conditions were declining, with some areas reporting fields in poor shape. Irrigated fields looked fair, and some bolls were opening. Corn harvest was complete. Wise County reported poor yields due to drowned-out fields and damage by wild pigs. Sorghum harvest was complete with 2,000-4,500 pounds per acre and average test weights reported.

Dry conditions prevailed, but tropical storm weather was in the forecast. Field activities, including discing, stalk cutting and plowing, continued. Cotton harvest was progressing. Cotton in low-lying fields produced very poor yields, but well-drained fields made up for that yield loss. Harvest was running behind, and growers were struggling to stay ahead of the forecasted storm. Corn harvest was complete. The rice main crop was harvested, and producers were flooding fields for the second crop. Rangeland and pasture conditions were dry and should benefit from rainfall. Hay baling continued and supplies were good, but hay producers were still hopeful to get a last cutting. Livestock were doing well. Cattle markets were improving.

Conditions were beginning to dry out, with little to no measurable rain reported. Hay production slowed due to drier conditions and cooler nights. Pasture and rangeland conditions were good. Subsoil and topsoil conditions were adequate. Producers continued to cut, bale and put away hay. Winter forages were being planted. Livestock were in fair to good condition. Armyworm infestations remained a problem. Wild pig activity continued.

Conditions were very hot and dry across the district. Most producers turned off their irrigation on cotton. Cotton bolls were starting to open in early planted fields. Sorghum was in good condition and maturing. Peanuts were close to being fully mature. Cattle were in good condition. Pastures needed rainfall that would also improve conditions for upcoming winter wheat plantings.

Soil moisture was adequate to short across the district. High winds and 90-plus degree temperatures continued to dry up soil moisture, which slowed summer grass growth. Forecasts called for slight chances of rain on multiple days upcoming. Pastures were starting to brown, but weather was perfect for harvest conditions. Farmers who harvested early were starting to prepare and plant winter wheat fields.

Scattered rainfall continued across the district with some locations receiving trace amounts and other areas receiving more than 3 inches. A strong storm system delivered high winds, thunder and lightning in some areas. Temperatures remained in the mid-80s in the mountains to the mid-90s along the Rio Grande River and lower elevations. Pasture conditions continued to improve in most areas, but many of the emerging plants were weeds. Cattle continued to graze pastures and rangelands. Fields were being prepared for pumpkin season. Pecans were being irrigated.

Another hot, dry week continued to dry out the soil. Small-grain producers finished up field preparations, and most were waiting for rain before early planting. Cotton crops were in mostly fair condition, and some areas showed promising yields. Grain corn and sorghum harvests were underway. Pecan orchards were showing potential for a below-average crop. Insect pests, specifically armyworms, continued to cause problems.

Walker and San Jacinto counties reported dry conditions, and Chambers County fields were starting to dry up, but heavy rains of up to 20 inches were in the forecast. Rangeland and pasture ratings were very poor to excellent, with good ratings being most common. Soil moisture levels were very short to adequate.

Parts of the district reported precipitation, but most areas received none. Rangeland and pastures were in good to fair condition and drying due to warmer weather. Drying vegetation and fuel loads were a wildfire concern. Hay harvest continued. Ranches with good management practices were showing abundant grasses. Guadalupe County reported that corn harvest continued with good yields reported. Livestock markets were good. Livestock conditions were fair to good, and producers were supplementing livestock and wildlife feed.

Conditions were hot and dry, with little to no rainfall throughout the district. Jim Hogg County reported half an inch of rain in some areas. Mornings were cooler, but daytime temperatures were in the 90s. Producers were reporting short soil moisture levels. Maverick County reported 100-degree days. Peanuts were doing well under irrigation. Upland cotton crops were doing well and should improve with rain in the forecast. Defoliation of cotton fields was beginning in some areas while other areas were wrapping up the harvest. Some areas reported being two weeks behind schedule on cotton harvest. Late-planted corn and sorghum harvests were wrapping up, and field preparation and stalk destruction were underway. Work continued in strawberry fields with plastic and mulch applications. Forage producers were cutting and baling hay, but the harvest was nearing a close. Pastures and rangelands were drying down under continued high temperatures and no moisture. More producers were starting to provide additional supplemental feed and hay to cattle. Rotation grazing was occurring as well. Producers were delaying wheat and cool-season forage plantings for rain and cooler temperatures. Pond levels were full in some areas and were receding in other parts of the district. Cattle prices were normal, but sale numbers were increasing. Watermelon and cantaloupe production continued. Irrigated Coastal Bermuda grass production continued as well. Sugarcane and citrus irrigation continued. Row-crop farmers were preparing fields for the next crop cycle. Dove hunters were in the area hunting in sunflowers and sorghum patches. Whitetail bucks were showing hardened antlers and shedding velvet. Wildlife was doing well but seeking water in livestock ponds and from water troughs.