The Asian citrus psyllid&nbsp;was found in a glassy-winged sharpshooter trap on a post in a commercial Navel orange grove southeast of Lindsay, Calif. (Tulare County).The psyllid tested negative for Huanglongbing disease (HLB).No ACP quarantine was expected in Tulare County at press time. Field surveys will be conducted for two weeks after the find to check for additional psyllids. 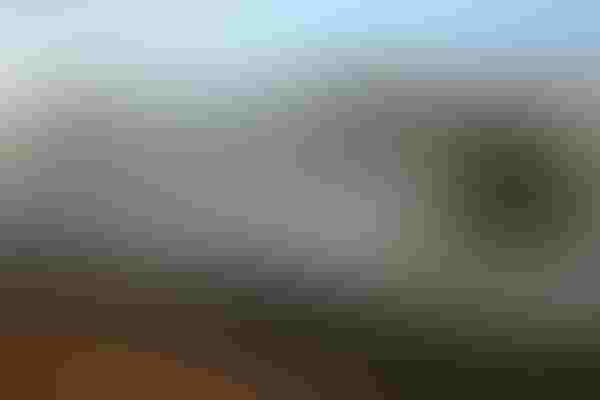 The first find of an Asian citrus psyllid (ACP) in California’s major citrus production belt has the industry on alert.

The insect was found in a glassy-winged sharpshooter trap on a post in a commercial Navel orange grove southeast of Lindsay, Calif. (Tulare County).

No ACP quarantine was expected in Tulare County at press time. Field surveys will be conducted for two weeks after the find to check for additional psyllids. An insecticide spraying would then likely start.

“There was a partial part of a psyllid found in the trap,” said Ted Batkin, president, California Citrus Research Board, Visalia, Calif. Batkin discussed the insect find during the “Looking for Terrorists – Pest Threats to the Citrus Industry” seminar held Feb. 15 at the 2012 World Ag Expo in Tulare, Calif.

“There is a lot of surveying underway,” Batkin said. “It appears we do not have the ACP in Tulare County in any kind of breeding population.”

Marilyn Kinoshita, Tulare County agriculture commissioner, said, “We have a pest detection report. It was a positive (ACP) find.”

The ACP, Diaphorina citri, is the primary vector (carrier) of HLB – also called citrus greening — the worst citrus disease in the world. Every citrus tree worldwide infected with the bacteria Candidatus Liberibacter results in tree death.

“HLB is a death knell to the tree,” Batkin said. “Once the bacteria gets into the citrus tree it is toast. It may take five to 10 years after infection but the tree will not survive.”

The psyllid itself is more of a nuisance pest causing minor tip burn on new plant leaf flush, Batkin says. Every place in the world the psyllid has been found eventually gets HLB.

Jay Van Rein, California Department of Food and Agriculture (CDFA), confirmed that the agency’s ACP “preliminary determination” in Tulare County occurred Feb. 2. USDA confirmed the find Feb. 7. USDA confirmation is required for any pest not previously found in the county.

Kinoshita says the psyllid’s “back half” was found in the trap. Identification was determined from the insect’s genitalia.

“All it takes is one ACP to be declared an official find,” Kinoshita said. “They are treating the insect as a hitchhiker.”

“We have not found the bacteria in the state of California but it’s here,” Batkin said. “Everywhere the psyllid goes – like Mary’s little lamb – the bacteria follows. It’s probably somewhere in the Los Angeles area.”

To date, almost all of the psyllids found statewide were in residential citrus with a few in commercial citrus. None were found in California’s major commercial citrus production belt in the central San Joaquin Valley until the Tulare County find.

The ACP is about the size of an aphid. A hand lens is required for identification.

HLB was found in Texas in January this year. The Lone Star State already had the pesky psyllid.

The first HLB disease detection in the U.S. was in Florida in 2005. The first psyllid was found in the Sunshine State in 1998. Florida growers are the nation’s largest producer of oranges for juice.

Most California citrus is grown for the fresh market.

“Due to the drop of citrus production in Florida caused by HLB, we will see the cost of orange juice increase in the U.S.,” Batkin predicted. “We are seeing a 10 percent to 15 percent drop in (citrus) production per year in Florida due to the disease.”

Batkin says the California citrus industry is developing programs to prevent future bacteria spread into the commercial citrus. The plans include strategies to prevent the psyllid population from building up.

The mistakes made in Florida after the psyllid was found included ignoring the pest, he says.

The ACP was first found in California in San Diego County in 2008 — several months after the insect jumped the border from Tijuana, Mexico. The pest has been found at other California locations including Imperial, Ventura, Orange, and Riverside counties — almost all in residential backyard citrus.

Thirteen psyllids have been trapped in Arizona — most in Yuma County. The single find in commercial citrus was in a Yuma-area grove.

The CRB, U.S. Department of Agriculture, CDFA, California Citrus Pest and Disease Prevention Committee, Cooperative Extension, and others are working with commercial growers to prepare for future psyllid finds.

“We are asking commercial growers to follow the 80-20 rule,” Batkin said. “This means have a basic plan in place, know who to call, and discuss this with your entire management team.”

The advice is designed to prepare commercial growers for “when the call comes” about a psyllid find.

The 80-20 rule is designed for crisis intervention. Batkin says 80 percent of the issues can be planned in advance. Growers need to change about 20 percent of their plans when a psyllid is found.

“Get your plan in place and know who will be responsible for it,” Batkin said. “Know who to call.”

“Mostly importantly, discuss this with your farm management team,” Batkin explained. “Make sure everyone in your organization knows the exact plan. Don’t wait until it happens ... This is disaster preparedness.”

Citrus research over the short and long term holds the answers to ACP and HLB.

On Jan. 30, the U.S. citrus industry applied for a $10 million, five-year USDA research grant to study possible solutions to the insect-disease maladies. If approved, specialty crop funds from the 2008 farm bill would fund genetic and genome research.

A USDA response is expected in May or June. Grant approval would require matching funds from the citrus industry.

The international research effort would include scientists from California, Arizona, Texas and Florida; plus China, Brazil, Mexico, China and Southeast Asia. The citrus industries in these international locations already have the psyllid and HLB.

Short-term research is poised to prevent the psyllid from picking up the bacteria and the transmission from one tree to another. In part, scientists would apply advanced technology from the mosquito industry aimed at reducing the spread of malaria.

“We’re probably 30 years away from having a tree to plant in the orchard which will have any resistance or tolerance to the bacteria,” Batkin said.