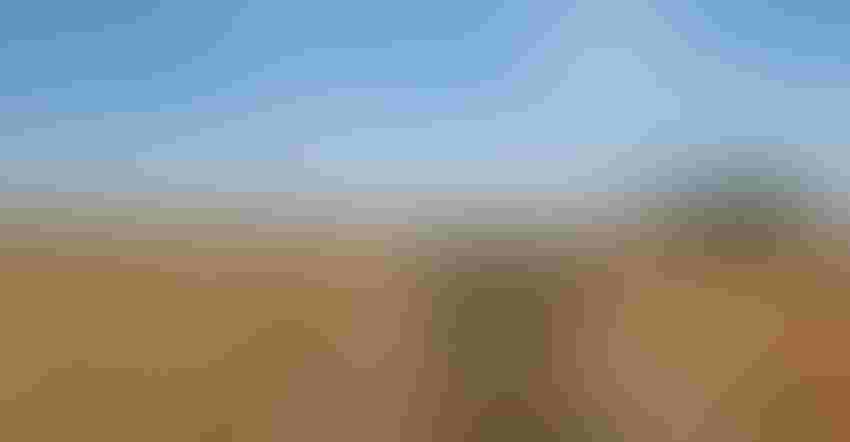 “The whole Western United States has been in drought to some degree for basically the last 20 years,” says Mark Brusberg, chief meteorologist, USDA Agricultural Weather and Assessments Group.

A trifecta of factors affecting water demand in the Southwest will alter availability for agriculture and drive changes in irrigation and conservation practices.

The combination of a megadrought that has lingered in the Western United States for the last 20 years, population growth that increased water demand, and a warmer atmosphere all contribute to water availability, says Mark Brusberg, chief meteorologist, USDA Agricultural Weather and Assessments Group.

“The whole Western United States has been in drought to some degree for basically the last 20 years,” Brusberg says. A megadrought, he explains, is one that lasts 20 to 30 years, sometimes more. “That happens every few hundred years, especially in the Southwest,” he says.

“A lot more people now live in the Southwest, water resources are being managed to a higher degree than ever before, and the atmosphere is getting warmer.”

The effect of a warming atmosphere varies within regions, Brusberg says. “If the air is warmer, it's able to hold more moisture before it reaches an equilibrium and starts to condense out.

So, how long does this system persist?

He says research indicates the Western megadroughts seem to feature predominant La Niña patterns over a 20- to 30-year period. “We're approaching a third year of La Niña, which is uncommon. If you look at the record back 50 years, that's only happened three times. One of those was at the beginning of the 2000s,” Brusberg says.

“The National Weather Service is putting resources into developing an improved seasonal forecast that would range anywhere from a season to two years or more out,” Brusberg says.

He says the U.S. Drought Monitor (USDM) is another tool used to identify areas that need disaster assistance.

“A lot of people asked if we started the drought monitor because of the Western drought. No. That was just by happenstance; the Drought Monitor had been in the works for a while.”

The USDA uses the USDM map as a trigger for programs that help agricultural producers recover from drought and other natural disasters. Programs include:

He says he’s been encouraged by the success private vendors have had with practices such as installing soil moisture sensors to provide data on when to turn pivots on and off. “At the end of the season, farmers who pay attention could save an irrigation. Sometimes yields are higher.

“NRCS offers programs that help pay for those soil moisture sensors as well as other conservation practices,” Brusberg says.

He also concedes that the general public doesn’t understand the plight of farmers. California almond growers, for instance, come in for harsh criticism over water use. “But you have to ask people, do you like almonds? Do you like almond milk?”

Brusberg says the 2012 drought got people's attention. He compares that awakening to the Dust Bowl when “people became more aware that they needed to conserve soil. They adopted new planting techniques. USDA created the Soil Conservation Service [now NRCS] that encouraged farmers to do things a little differently.”

After 2012, he says, efforts increased to make people aware that they need to become more resilient to some climate features. “There's always going to be drought. If you look at a 10-year period, Texas and other states could experience drought for several years.

“Farmers need to prepare for that because they can't keep going back to the cycle of dependence on crop insurance. In the West, farmers are having to make tough decisions, wondering what crops they are going to grow.”

He says a delicate balance exists with allocating water for drinking, water for industry, and water for agriculture. “Also, what will the price of water be? Since 2012, we’ve  seen a new outlook on how we manage water.”

He adds that the current situation seems to be “one of the every-several-hundred-year events with people arm wrestling over every drop of water—not just for food, but for energy production and drinking water. And [the climate] is getting warmer, and I would anticipate it staying warmer. The population's not going to drop, either.

“So, even if  El Niño rainfall begins, folks still need to plan for the future. People in the Southwest, as well as in other regions, have come to the realization that things aren't going to be the way they were 20 years ago.”