Barn Spotlight: Leslie and Susan Kleiman have no regrets after repairing the structure on their Michigan farm. 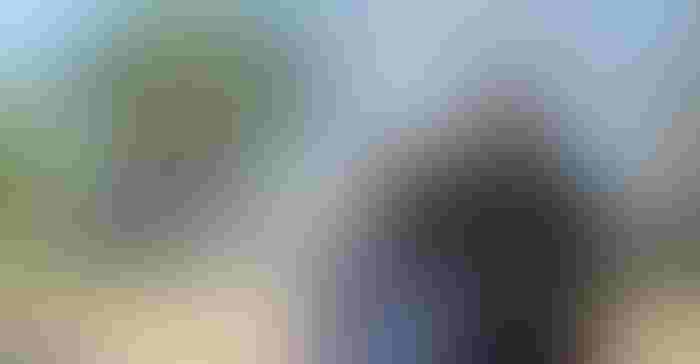 The truth is, women have always recognized that to have a successful farm, a good barn is a necessity. If a choice must be made, the barn comes first.

The big white barn on the Leslie and Susan Kleiman farm, W2145 Spring Green Road, Wilson, Mich., is no longer the economic necessity it was at the time it was built in the 1920s. But it still is the heart of their farm.

“We need windows, and we have no insulation in the house,” Susan says with certainty. “But when Leslie said, ‘We either have to put money into the barn or take it down,’ there was no doubt in my mind. We were saving the barn.”

For Susan, saving this barn was a way to honor the big barn on her own childhood farm in Perkins, Mich., which was lost to fire when she was a girl. “I still cry over that barn,” she says solemnly, “and I wasn’t about to lose this one.” For Leslie, it was about generations of a family farm that in 2019 qualified for Centennial Farm status.

The gambrel-roofed, four-bay barn with 10-by-10-inch hand-hewn hemlock mortise and tenon, post and beam construction served the Kleiman family well for four generations of farmers. The land was purchased June 21, 1919, from Thomas and Margaret Cory, Spalding, Mich., by Casper Kleiman, whose parents were immigrants of German and Polish ancestry.

Casper’s son John built the 80-by-32-foot gambrel-roofed barn to replace a much smaller one and began dairying with a herd of mixed Brown Swiss and Holstein cattle, while using part of the barn for real horsepower — the work and driving horses vital to the farm’s operation.

In the early 1950s, a 40-foot, round-roofed addition was constructed, and the original barn was remodeled to replace horse stalls with stanchions for a total of 50.

John Jr. took over the farm from his father in 1962, and in 1980, when son Leslie graduated from high school, another 36-foot addition was built on the back of the round-roofed barn. Twenty-one cows expanded the herd so father and son could generate more income as a team. The combined barns have 71 stanchions.

“At top production, we were milking 120 head and keeping our own bulls,” Leslie says. “But we were having to bring cows in for milking in two herds essentially, because there weren’t enough stanchions. In the winter, that negatively affected milk production. We finally sold the herd in 2015.”

The barn, which had stayed warm throughout the winter because of the animals’ body heat, was now vulnerable. It only took three winters of freezing for the wall on the banked side of the barn, which had always leaned in a bit, to give way. In 2018, the Kleimans were devastated when 45 feet of wall collapsed. "Now what?” Leslie says, motioning as he speaks.

That led to a series of challenges, including contractors who didn’t return calls or gave estimates well out of reach. Then there was checking on various materials and options (poured concrete, traditional block, half-poured and half-block, treated timber) and gasping at the price tag. But winter was coming, and that gaping hole soon would fill with ice and snow and cause further damage and heightened risk.

Then things came together. “It was suggested that I could repair the barn using 2-by-2-by-6-foot solid concrete retaining wall blocks," Leslie explains. "They are designed to hold back dirt, and they were the cheapest option."

The bad corner of the barn was professionally set on cribbing, the exposed trench was filled with bales and layers of hay, and it was covered with inexpensive scrap rubber roofing to prevent water seepage through the winter of 2018. Leslie removed an old silo room and did site preparation himself.

When 2019 arrived, so did a good contractor who did the excavation and centered the solid concrete units on the existing 30-inch footing. The new section of wall is 2 feet wide, 8 feet high and 60 feet long. Fifty blocks were used, each weighing 3,600 pounds and tongue and grooved with geomesh between them extending 10 feet into the soil. The wall has been sealed, the area back-filled, and the Kleiman barn once again stands securely.

“I do not know of any other people who have used these blocks like this,” Leslie says. “I don't think they will crack. They are not mortared in. They just sit on each other and are held in place by their weight.”

With the foundation completed, Leslie set about to repair the threshing floor in the mow. Poles once used as a storage area high over the threshing floor were repurposed to replace broken poles in the flooring, treated-lumber decking was laid, and the original floor boards went over that. Throughout the entire process, a dutiful robin never abandoned her nest as the work went on over and around her.

Today, the mow continues to be used for hay. The milking parlor is home to barn cats and barn swallows. A dozen or so cattle come and go from another shed on the farm, a few being descendants of cows from the last milking herd.

“I learned a lot of lessons,” says Leslie, who rents the land to a neighbor and is a manager for UPS while Susan is a mail carrier for the U.S Postal Service. “Don’t wait until structural failure occurs to make repairs. Get the barn stabilized by professionals. It is worth every penny. Be flexible about options and understand them. Don’t expect a contractor to come at a moment’s notice. Winterize properly. Do what you can do yourself to save money.”

He smiles, looks at Susan with a sparkle in his eye and adds, “And have your wife’s support. Both of us agree that to let such a fine structure fall into disrepair would be a travesty. We want the barn to be there long after we are gone.”