&bull; Tobacco farmers in most areas where tobacco is grown in the United States were hoping for a hot spell in mid-May after experiencing cool spring temperatures that resulted in delays in planting and in-field development. 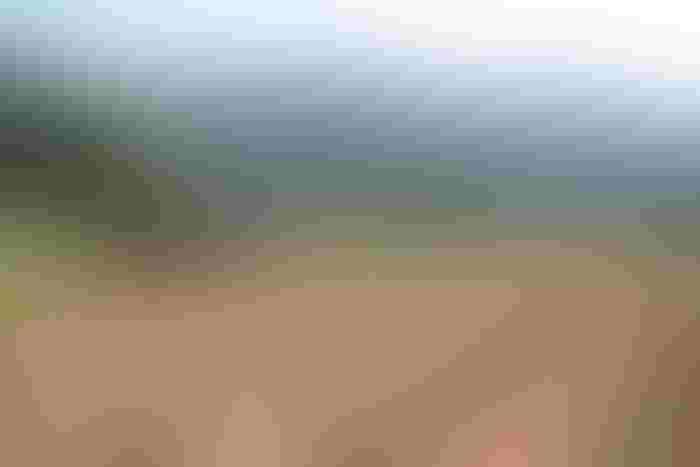 <p> IN THE MOUNTAINS of western North Carolina, a farmer and his neighbor survey a good young stand of burley. This field is near Boone.</p>

Tobacco farmers in most of the areas where tobacco is grown in the United States were hoping for a hot spell in mid-May after experiencing cool spring temperatures that resulted in delays in planting and in-field development.

“We have had cool weather this spring, and it has set the crop back a bit,” said a leaf dealer in Wilson, N.C., in early May. “We need to get some warm nights to get the crop to take off and start performing like it should.”

A flue-cured grower near Raleigh, N.C., noted that the cold had forced him out of his normal planting schedule. “I don’t like to set tobacco in May, but I am having to this year,” said Marty Adams of Knightdale.

In Tennessee and Kentucky, planting of fire-cured and dark air-cured tobacco had barely begun. "It usually starts up around May 1, but because of the wet weather, full-scale planting didn't get going until (around May 10)," said Andy Bailey, Extension dark tobacco specialist.

In Kentucky, Extension tobacco specialist Bob Pearce said some limited planting of the state’s burley crop had been completed by May 6. "Normally we would be a little farther along. I would say most of the crop is a week or 10 days behind."

In Virginia, USDA reported that transplanting through May 13 had reached 40 percent for flue-cured, 25 percent for fire-cured and 10 percent for burley. Those figures were close to average, but way behind 2012.

But one state was running ahead of schedule. J. Michael Moore, Georgia/Florida Extension tobacco specialist, said planting was complete in Florida at the beginning of May. Some of the crop had been set out around the middle of March, earlier than normal. "So there is actually some tobacco in Florida that is ready for layby already," said Moore on May 2.

In Georgia, plantedacreage increased a little. "We expected a 10 percent to 15 percent increase, and that appears to be about right," said Moore.

A number of new or relatively new varieties should help in production of all the major types this season:

Flue-cured: A second-year variety from Gwynn Farms—GF 318 — has attracted considerable attention in Florida and Georgia this season, said Moore. Marketed by Gold Leaf Seed, GF 318 is comparable to NC 196 but has mosaic resistance and is seven to 10 days earlier in maturity, he said. The two varieties should fit together well to extend the season. “Plant GF 318 early and it can help fill your barns until the rest of the crop ripens,” said Moore.

A new flue-cured variety from Cross Creek Seed called CC 143 will be planted on about 500 farms this season. "It produces better quality, high to very high yields, a bright style of leaf and excellent holding ability," said Sam Baker, Cross Creek vice-president. "What's more, it has very high resistance to Granville wilt and both races of black shank."

Burley: A new variety from theKentucky-Tennessee joint state breeding program, (KT) 212, gets much of its genetic background from the old standard burley variety KY 14 x L8, but is a little earlier maturing.

KT 212 is the only commercially available variety with early maturity, high yield potential and a significant level of resistance to race 1 black shank. “This variety will be a good choice for growers who need an early maturing variety for early harvest but who can’t successfully grow KY 14 x L8,” said Pearce.

Tobacco acreage is up this season, but the increase didn’t appear through mid-May as had been predicted by many observers this year. The situation in Kentucky is similar to many of the other tobacco states. Extension Specialist Pearce expects a small increase in burley acreage, perhaps five percent.

“In the central Bluegrass, there is much more interest in growing burley than in the past. But in western Kentucky, some growers are cutting back.”

Why? Good prices for crops that compete well for tobacco land have been part of the reason. Also, the new crop insurance rule that tobacco can’t be planted on land that was in tobacco the two previous crop years is causing some growers to look at other alternatives.

But one segment of tobacco has increased more dramatically. The rising demand by consumers for products containing organic tobacco has led to an increase in contracts for tobacco grown in this style.

One of them is Adams, the Knightdale farmer. “I am going to plant  organic tobacco this year for the first time,” he said. “The price will be attractive this year.  if I make the pounds.”

But it wasn’t able to find a suitable facility. As a result, it sold only four in this country in 2013. All four were made in Tytun’s Simcoe, Ontario, factory. An executive of the company told Southeast Farm Press that it still hopes to manufacture barns for the U.S. market in the future.

Should you spray your corn for stink bugs?