The practice can prevent buildup that can fuel catastrophic wildfires. 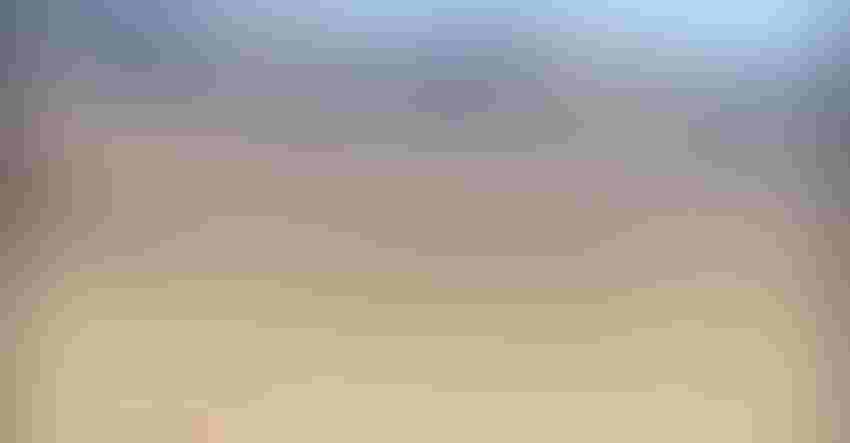 A University of Nevada, Reno study finds that grazing rangelands in the fall can drastically reduce cheatgrass that can fuel catastrophic wildfire.Barry Perryman/UNR

Strategic grazing on cheatgrass-dominated rangelands can reduce this invasive species and reduce fuel loads for wildfires.  Barry Perryman, Professor of Rangeland Ecology and Management, University of Nevada (Reno) has been researching the problem of cheatgrass (downy brome) and ways to utilize it, for many years.

“I’ve observed what’s happened in the West since the 1960’s.  Cheatgrass was already here, but in recent decades has greatly expanded across the landscape,” he says.

Land management agency strategies to control cheatgrass weren’t working.  This grass is native to central Asia, but always grazed.  “It’s hard to find cheat grass there, unless you look under a thorny shrub where animals can’t reach it.  Those regions don’t have fires.”  There isn’t fuel buildup from year to year because everything is grazed.

By contrast, in the American West, fires have increased dramatically.  Since the late 1970’s, government land managers and environmentalists thought we should leave more grass, and reduce grazing, allowing old grass to accumulate.

Perryman started an experimental project to reduce carryover fuels by grazing cheatgrass in the fall.  Grazing it in the spring is common; grazing animals will eat it when it’s young and green, but it goes to seed early and protein levels drop.  Cattle avoid mature cheatgrass, with its sharp seed awns.  “Later in the year, after the seeds drop, it becomes palatable again, but still low in protein,” he says.  This can be resolved by providing a protein supplement.

Range managers can estimate the amount of dry grass on various allotments, and number of grazing days could be planned accordingly.  “For fuels management, if we have 500 pounds of old dry cheatgrass per acre on Sept. 1, and reduce that to 200 pounds per acre during fall grazing, this could make the difference between being able to make a direct attack or a non-direct attack with a fire crew if a fire goes through.  By September the fire season for that year may be over, but if it’s a dry fall it may not be.  Even if we get fall rain and don’t have to worry about fire, this would be 300 pounds per acre that won’t carry over into next year,” says Perryman.

Even though protein levels in dry grass are low, energy levels are high (structural carbohydrates that cattle convert to energy during rumen digestion).  “Crude protein level in cheatgrass can be highly variable from year to year--as low as 3%, and as high as 8%.  When given a choice, cows prefer dry cheatgrass in October rather than dry crested wheatgrass, or any native perennial that’s not green and growing. Cheat grass becomes softer in the fall and not as stiff,” he explains.

“In the fall when everything is dry, cows are in their second trimester of pregnancy (and calves are weaned), when their nutrient demand is lowest,” he says.  Protein supplement will increase feed intake when eating dry forages that are low on protein.  They need protein to feed the microbes in the rumen that digest fiber and turn it into energy.  With protein supplement, cattle consume more dry feed.

In Perryman’s experiment, cheatgrass seed banks were reduced significantly in grazed areas.  Even though the plants already dropped their seeds, grazing made a difference; cheatgrass does not establish very well on bare soil.  It needs litter—old plants from last year and all the previous years they were not grazed.  “Standing dead material protects the seed and it germinates in that litter.  If you remove the litter (grazing in the fall), any seed that’s still there may germinate but dies.  It can’t survive and establish a new plant on bare soil,” he says.

“Our project showed that if there are any perennial grasses left, within about 3 years of fall grazing we can shift the dominance from cheatgrass to perennials and they can then keep cheat grass from proliferating.” Without such a thick stand of cheat grass—which grows much thicker than bunch grasses--perennials can thrive, with more access to sunshine, water and soil nutrients; it’s not all used by cheat grass.

After three years of grazing these areas, there was a big difference.  “At first it was about 500 pounds of cheatgrass per acre and only about 100 pounds of perennial grass production.  By the end of three years it was just the opposite on our pilot study of 1500 acres.  We then did a larger study on about 6000 acres.  We had 800 cattle out there for 5 weeks, grazing a line across the landscape to create a firebreak—using protein supplement as the attractant to keep them in that area,” Perryman says.

In a study of cheatgrass seedbanks he found that when those were grazed, seed numbers were reduced to about 2000 seeds per square meter.  “When we got it down to that level, it made a difference in whether the cheat grass could dominate the perennial grasses.  If you stop the fall grazing for even one year, however, the cheatgrass seed bank rebounds—back up to original numbers.  It’s an aggressive species and you can’t let up on it,” says Perryman.

Land managers are still trying to determine the best way to “restore” and manage rangelands.  “In the past we’ve looked at plant composition in terms of what we thought it was during pre-settlement times,” he says.  That didn’t take into account the native grazers (bison, elk), Native American impacts, or the fact we hadn’t yet introduced non-native species of plants and animals brought by European settlers.

We now have non-native plants and animals that have become established, and we have to live with them and try to deal with them as best we can, to minimize their adverse effects.  The anti-grazing groups’ idea that removing cattle will solve everything, is unrealistic.  If we can use grazing animals as a tool to work toward what we’d rather have, this is a much better strategy.

There is a lot of opposition from environmental groups against these grazing projects.  They don’t want to acknowledge a beneficial use for cattle or this would negate their agenda for removing cattle from public land.  They don’t want to recognize that grazing animals can be our best land management tool.

The sage grouse controversy is a case in point.  “Anti-grazing interests typically are not interested in solutions.  Their groups are out of business if we have answers,” says Perryman.  They are only interested in winning, and keeping a battle going so they can keep bringing in revenue for their organizations.

“If they don’t have an issue to fight, they can’t generate income.  They won’t compromise or negotiate science-based solutions.  If ranchers and land managers try to compromise, environmental groups just keep moving the goal line and there is never a resolution.  The biggest threat to sage grouse and every other species on these lands is fire.  Every year, fire burns up more bird habitat, yet the anti-grazing approach is to remove more livestock. If we do that, there is no fuels management,” says Perryman.

Dry cheatgrass in regions where cheat grass has become dominant is the biggest danger because it burns so readily.  Utilizing cattle to reduce fuel loads, finding ways to enable them to graze it, could be one of our most effective ways to combat wildfires.