Unlike last year, as well as the other three previous years of drought, the vines face a much higher risk of fungal disease due to the early-season rain. 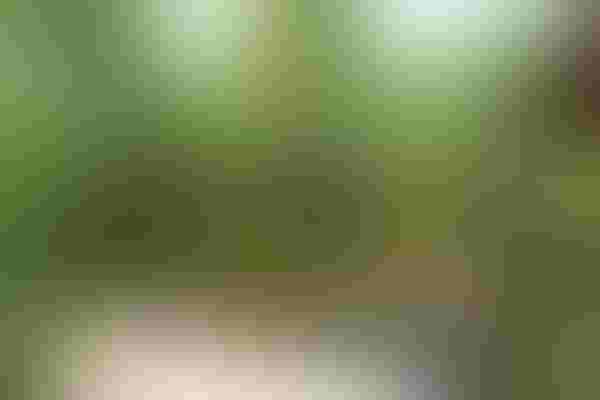 On average, the compound buds on Thompson Seedless vines in their vineyards began opening the last week of February, says George Zhuang, University of California Cooperative Extension viticulture farm advisor for the county. That was a week sooner than even last year’s unusually early start. The Fiesta budbreak, also earlier than in 2015, got underway approximately one week earlier than Thompson this year.

The dry, relatively warm weather of February ended with a series of four storms in early March with the total 3 inches of rain, including one that brought nearly 1.3 inches of rain to many of the county’s vineyards in a single day.

After the accelerated start, vine growth was slowed by cool temperatures in the first part of March. On March 17th, Zhuang measured average shoot growth of about 3 inches on Thompson Seedless vines and 8 inches or so in Fiesta vineyards.

However, unlike last year, as well as the other three previous years of drought, the vines face a much higher risk of fungal disease due to the early-season rain. That includes phomopsis cane and leaf spot. This fungal disease is characterized by tiny dark spots with yellowish margins on leaf blades and veins that first appear three to four weeks following rain.

Shoots are most susceptible from budbreak to 18 inches of growth. Spores are released in large quantities from the overwintering pycnidia or black specks on diseased canes and spurs. These are splashed by rain onto early developing shoots and infection occurs when free moisture remains on the unprotected green tissue for many hours.

Phomopsis remains a threat to young shoots until the weather dries. That may not be until middle April, which is typically the end of spring rains in this area, he notes.

Wet weather also increases the risk of powdery mildew. Here, too, timely treatment is the key to controlling this fungal threat, Zhuang says.

After budbreak, infection occurs when rain, irrigation or dew that wets the cordons or canes is followed by 10 to 13 hours of leaf wetness when temperatures remain between 50°F and 80°F.

Zhuang recommends checking the undersides of basal leaves for powdery mildew spores. If lesions are found, he encourages growers to use the powdery mildew risk assessment index, developed by University of California, to assess the threat of this disease and determine the need for and timing of treatment, Details are available online at www.ipm.ucdavis.edu.

Meanwhile, Zhuang advises Fresno County raisin growers to remain alert for vine mealybugs this spring as they move from the roots or trunk to the cordons and canopy.

Last year, this pest was a huge problem for many growers throughout the county. It could be again this year, he notes.

“The lack of really cold temperatures this past winter and the dry weather in February may have allowed more of the already-high numbers of vine mealybugs to survive the winter,” Zhuang says. “Also, the wet weather in March will contribute to more vigorous vine growth than we’ve seen the past few years to support higher populations of vine mealybugs.

The wet winter weather has also set the stage for vineyards to be under higher weed pressures this season than growers have seen in recent years.

A good selection of pre- and postemergence herbicides combined with timely and proper spray techniques should give conventional growers the upper hand in controlling the weeds, he notes. However, he expects organic growers, who have far fewer control options, to face a tougher challenge combatting any increased weed pressure this year.

“Last year, some organic raisin growers in this area had a difficult time managing the hard-to-kill weeds, like Johnsongrass and Bermudagrass” he says

Zhuang’s advice for raisin growers in dealing with the various threats this season?

“Keep your eye on the weather forecast, scout in your vineyard and be ready to adjust your disease, pest and weed control programs as needed,” he says. “Then, take prompt action to prevent a problem from getting bigger.”