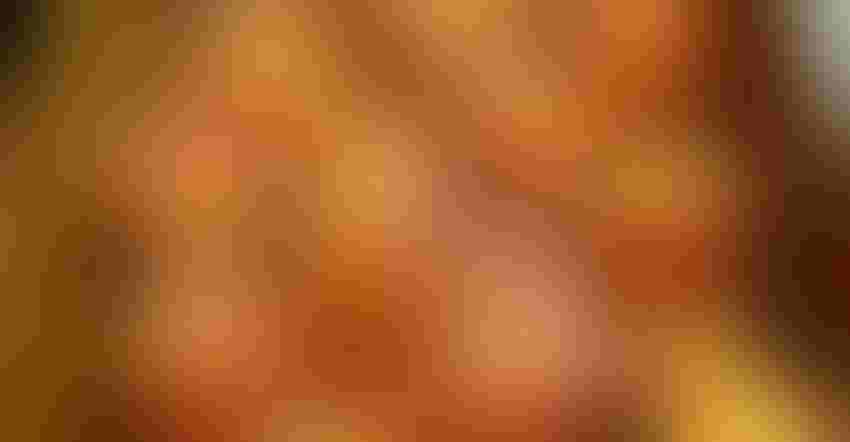 A half-bushel of Philley Peaches from the 2019 growing season. Peach orchards around the state are experiencing good growing conditions. Adam Russell

“Commercially, producers who applied spray applications that help substitute for those lost chill hours are looking good,” he says. “But if you’re a homeowner and you see trees struggling to leaf out, it’s because of warm temperatures in January.”

Moisture conditions look good for much of the Texas peach crop, he says. Southwest Texas and the Hill Country were experiencing drought, but over the last two weeks, rains have improved soil moisture conditions dramatically.

The moisture is a blessing, but it also means producers should be vigilant against diseases and pests, he says.

“If the weather continues to be wet, they’ll need to keep up with their fungicide and pesticide management programs,” he says. “It’s especially important to be proactive with fungicides. If you have a good crop you have to stay on top of things until you get across the finish line.”

So far, Stein says Texas growers have not faced any cold events or storms that negatively impacted trees.

Stein says he expects some peach producers with hightunnel-growing technology in the Hill Country to harvest their crop as early as May. Those producers use high tunnels to extend their growing season.

“High tunnels allow those producers to start earlier and then transition to their regular orchard through the rest of the season,” he says.

Stein says he doesn’t know how the COVID-19 pandemic and stay-at-home orders will affect marketing fruit but suspects it won’t hurt.

“I don’t think marketing fruit will be a problem,” he says. “I anticipate fruit and vegetable stands will be open because food is essential. The situation could help because people might want to get out, and they want to support local business.”

Prices for fresh fruit remain steady or are experiencing slight upticks, he says. The trend of direct farm-to-market sales with fruit stands or at farmers’ markets continues to grow as consumers demand quality sourced produce and producers try to realize better profit margins.

“The market for fresh fruit has been really good,” he says. “It’s easier for producers, and consumer trends have led to a surge in direct-sale marketing by growers. There’s more interest in locally grown, and some blemishes on the produce are not such a big deal.”

Scattered rains throughout the week halted fieldwork. Another 2-4 inches of rain fell in parts of the district. Some flooding and wind damage were reported. Producers needed dry weather to harvest small grain forages and to finish planting corn and sorghum. The threat of a frost made many fruit, nut and vegetable producers nervous. Grasses were growing, and pastures looked good. The cattle, sheep and goat markets were way down. Ripple effects from COVID-19 hit agricultural producers. Crops in low areas took on some water but looked fine.

Scattered, light rains and strong winds were reported. Crops looked good, but there were still concerns of dry overall conditions and crops needing deep moisture. Cotton was mostly planted and coming up. Farmers were evaluating newly planted cotton for wind damage. Corn and grain sorghum fields were good to excellent. Rice planting was nearly complete. Summer grasses were starting to grow, but pastures needed a soaking rain. Herbicides were being applied on pastures and hay fields as weather conditions allowed. Livestock were in good condition. Pecan nut casebearer monitoring began.

The district received up to half an inch of rain with cooler temperatures in the forecast. Pastures and rangelands seemed fair and were beginning to green up. Farmers continued to prepare their fields for planting season. Producers with late-planted wheat that had not matured started spraying fields. Early planted wheat was doing well with the moisture. Many growers were finishing up their fields and will start planting corn within the next few weeks. Cattle were in good condition.

Topsoil and subsoil moisture conditions were adequate to short. Pastures and rangelands were poor to good, and slowly greening up with warmer temperatures. Cattle conditions were improving as grazing conditions improved. Cow-calf producers were in the middle of calving and continued to provide supplemental feed. Stockers on graze-out wheat were performing well under moderate weather conditions. Winter wheat was in fair condition, and some fields were heading out. Corn planting was expected to be in full swing soon. Cotton planting should begin around May 10 with sorghum planting starting around the end of May. Freezing temperatures were in the forecast and may impact wheat.

Topsoil moisture levels were adequate to surplus. Some fieldwork was done. Temperatures reached into the 80s during a couple of days. A strong cold front dropped temperatures into the 30s and delivered 0.5-4 inches of rain. Rains filled ponds, cisterns and tanks. Pastures were green with cool-season grasses. Muddy conditions were causing some challenges for livestock. Producers were watching for illness and stress signs in livestock due to up and down temperatures. No sale barns were open due to COVID-19.

High temperatures were in the 80s with lows in the 40s. Precipitation was below half an inch.  Winter wheat was cut and baled. Many cotton producers were applying herbicides and preparing fields. Alfalfa and forage wheat fields looked excellent. Producers continued to have issues with alfalfa weevils. Cotton acres were pre-irrigated. Pecan orchards were being irrigated as well. Producers continued to feed livestock and wildlife.

Weather was relatively warm, with rain and colder temperatures late in the week. Winter wheat was in mostly good to excellent condition. Most fields reached the heading stage. Grain and forage sorghum plantings were underway, as were field preparations for cotton planting. Rangeland and pasture conditions were improving. Livestock were in fair condition, and there was a slight increase in cattle prices.

Heavy rain saturated the ground. Soil moisture conditions were adequate to surplus. Grasses were growing well. Rangeland and pasture ratings were poor to excellent with good ratings most common.

Mild weather conditions and very short to adequate soil moisture levels were reported. Temperatures were in the 90s in some areas. Scattered rains were reported around the county. Frio County reported 1-2 inches of rainfall throughout, while Kleberg and Kennedy counties reported trace amounts of rainfall. Zapata County reported 1-6 inches of scattered rain throughout the week. In Atascosa County, conditions were favorable for corn, cattle and forages. Strawberry producers were harvesting. Cotton planting started in Frio County. Planted cotton fields in other areas were emerging. Sesame fields were planted, and some had emerged. Wheat and oats around the district were in good condition, and grain heads were starting to mature. Dryland wheat and oat yields were expected to be well below average due to dry conditions. Watermelon transplants were planted. Pasture and rangeland conditions continued to improve, and supplemental feeding was declining. Food plots of sunflowers and milo were starting to emerge. Bunch grasses were growing substantially, which helps as cover for wildlife. Pecan orchards were in good shape. Cabbage harvests were somewhat active. Onion harvest continued. Spinach harvest was expected to end soon. Producers in Zapata County were still providing supplemental feed, hauling water and culling herds. Hay prices were $80-$100 per round bale. Seed prices for haygrazer increased in some areas. Some producers had planted their hay fields.