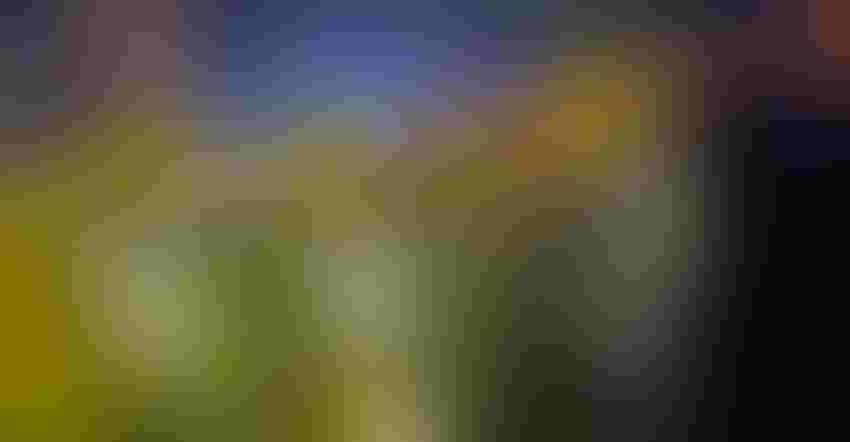 CHAPTER SUPPORT: Audrain County R-VI FFA Chapter made history with two members winning National FFA Proficiency Awards in one year. The chapter celebrated with its members at the 95th National FFA Convention and Expo in October. Courtesy of Vicki Duenke

FFA members compete in a total of 45 proficiency categories ranging from agricultural communications to wildlife management. These categories are based on supervised agriculture experiences, which allow members to grow skills that can apply to their future careers.

All four members also won their individual category in Missouri in April in Entrepreneurship/Placement, which allowed them to compete at the national level. For Emily Hoyt and Justin Duenke, their wins were historic, as it was the first time Audrain Co. R-VI FFA had two winners in the same year.

Here is a list of winners and a little more about their award-winning SAEs.

Agricultural Education. As a freshman in high school, Emily Hoyt of the Audrain Co. R-VI FFA Chapter took part in an Ag in the Classroom program. She decided to grow the existing program and even applied for Ag Ed on the Move internship, a program that provides resources to teach 10 lessons on agriculture commodities to third-grade classrooms.

Through her work, Hoyt incorporated hands-on activities to apply the concepts before teaching the lesson. That was only a portion of her Agricultural Education SAE; Hoyt also had an unpaid internship with the school district, serving as a teaching assistant for the seventh- and eighth-grade exploring agriculture classes.

Hoyt has since graduated high school and continues pursuing a career in education. She attends the University of Missouri, Columbia, pursuing a degree in agriculture education, leadership and communications with an emphasis in teacher certification. Hoyt is supported by her parents, Becky and Brad of Martinsburg. Her advisor is Stacy French.

Diversified Agricultural Production. Justin Duenke is the third generation on his family’s farm in Audrain County. His supervised agricultural experience is in multiple areas, including beef, grain, oil crops and forage production.

The Audrain County R-VI FFA Chapter also tends to the family’s Haflinger draft horses, a commercial cow-calf operation and backgrounding feeder cattle. Duenke performs various duties related to all aspects of the farm, from cattle and corn to horses and hay. His responsibilities have grown into making management-based decisions alongside his father and brother.

After graduating high school, Duenke continued his education at State Fair Community College. He is supported by his parents, Vicki and Mike of Laddonia. His FFA advisor is Stacy French.

Diversified Horticulture. Trenton Jones of the Higginsville FFA Chapter works at C&M Farms greenhouse and owns his own plant store, Trent’s Tropicals. At C&M Farms, Jones ensures the greenhouse plants are properly cared for through fertilization, irrigation and temperature control. He also assists customers with finding the right kind of plants.

Jones started Trent’s Tropicals in his backyard by selling plants on social media and eventually expanded the business. He works with a supplier to source exotic plants and meet demand. He sold plants through Facebook. He also created designs using plants in landscapes and containers.

For his deer mineral business, Deer-A-Max, Dowell worked alongside a deer specialist and nutritionist to develop a molasses-flavored mineral promoting immune system health and antler growth. He notes that the mix of ingredients boosts the immune system and enables deer to fight off illnesses such as blue tongue and chronic wasting disease. He also develops wildlife plots.

Dowell is supported by his parents, Ida and Trent. His advisors are Brant Burns and Amy Holder.

The National FFA contributed to this article.