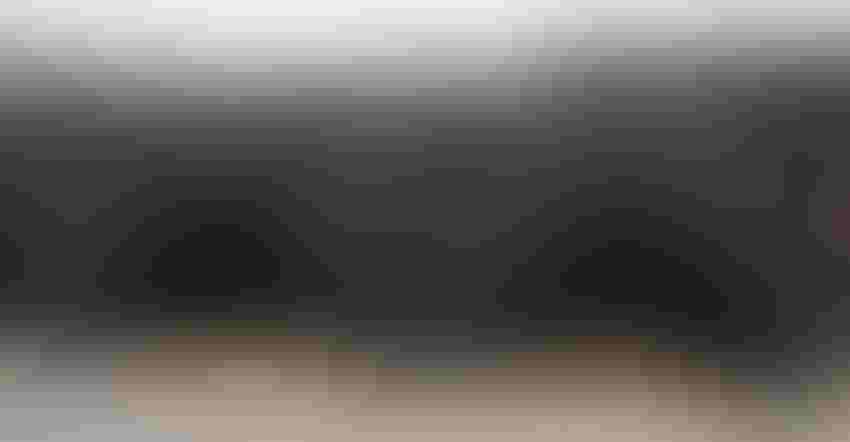 Finishing rations in our part of the country are usually around 10% roughage, give or take, to get energy levels high enough to finish cattle that will meet packer expectations efficiently. Corn makes up much of the remainder of the ration, and this corn is most often coarsely rolled or cracked.

Some finishing programs use whole corn. Coarse rolling or cracking the corn can help reduce sorting in total mixed rations, depending on the other ingredients. Sorting can contribute to digestive problems. At these ratios of low roughage to high concentrate, it is not advisable to have the corn ground too fine. This is because the finer the grind, the greater the grain’s surface area, which results in a faster fermentation rate in the rumen and driving down rumen pH. When ration mixing and bunk management are not consistent, finely ground corn increases the risk of acidosis.

Farmers who are new to finishing cattle often express concerns that they see “a lot of corn in the manure,” or more often, “too much corn in the manure.” This is especially true if they are accustomed to feeding higher-forage rations to other classes of beef cattle or feeding finely ground corn in high-forage dairy rations. Seeing corn in the manure leads them to believe that too much of the corn is undigested and being wasted.

The best measure of whether corn is being digested is to collect manure samples and submit them to a commercial lab for determination of starch in the manure.

Research on how grain processing and other feedstuffs influence livestock performance has been going on for decades, even centuries, and continues to be conducted. One example is a trial conducted by researchers at North Dakota State University comparing animal performance when feeding rations using whole corn, coarse rolled corn and ground corn in yearling steers.

In this trial, roughage levels started out at 31.5% and were decreased every 41 days to the final roughage level of 13.5% for the final 22 days of the trial. Roughage was a combination of hay and corn silage. The duration of the feeding trial was 145 days. The table below shows the overall results of the trial.

The results show no difference in the rate of gain or quality of the carcasses. There was a difference in feed to gain, and the cattle ate a little more of the ration that contained the whole corn.

Although not illustrated in the table, these differences were observed during the time when the ration contained 25% and 31.5% roughage. Differences at those inclusion rates could be attributed to higher-roughage rations having a faster passage rate than lower-roughage rations, so the corn is in the rumen and subject to fermentation for a shorter time. The finer ground corn would have greater fermentation during the shorter time in the rumen.

The take-home message is that there are very small differences in animal performance from milling corn in high-grain finishing rations. There is added cost to milling the grain; the finer it is milled, the greater the cost. In rations containing coarse and whole corn, the larger-size particles are more apparent in the manure than the rations that incorporate finer ground corn. Coarsely rolled grain reduces the risk for acidosis. There can be some benefits to coarse rolling the grain, such as reduced risk of acidosis, and it can help prevent sorting of feed in TMR-based rations. Similar results would be expected for calf-fed cattle.

Halfman is the beef outreach specialist for the University of Wisconsin-Madison Division of Extension. This column is provided by the UW Extension Livestock Team.