Like most farm kids, I’m still fascinated by ever-changing tractor tech — even if I can’t afford it. Here are a couple of show-stoppers. 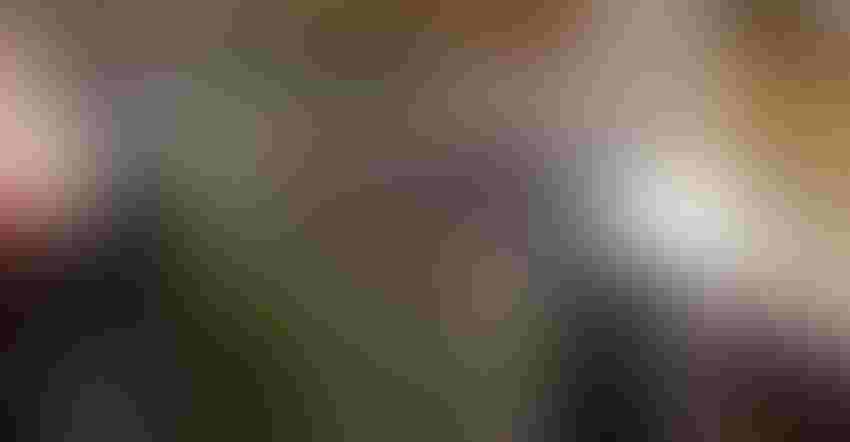 INCREDIBLE HULK: You don’t normally think of row crop tractors as gigantic. But this one commanded attention.

I never appreciated carnivals or even county fair midways — absolutely no magnetism there. But farm shows and field days really draw me in — for farmers I can “talk farming” with and the latest technologies. I admit it; I’m an ag tech junkie.

I always discover “new stuff.” At New York Farm Show, I laughed as I turned the corner at the Growmark FS booth, and Territory Sales Manager Steve Carr hit me with: “You’re back to learn about the latest, greatest in planting technology, right?” He knows me well.

I couldn’t argue, and he “hooked me up” with the foremost authority on the “hottest” tool coming. (See ‘Hottest’ planter tech tool for 2017.)

Behemoth row-cropper
In my granddad’s day, steam tractors were called behemoths. Today, they’re pitifully powered compared to the modern incredible hulks with six or seven steps you need to climb to reach the cab door.

During my wanderings at New York Farm Show, I was drawn to a huge natural green magnet — Agco’s 517-hp Fendt 1050 Vario row crop tractor. Maybe, it was just the 2,000-pound nose weight or the double duals (front and rear) that attracted my curiosity. Whatever. It worked.

This German-built Fendt with 455 PTO hp was the largest and first fixed-frame tractor built for row crop use. Unlike articulated biggies, the 50,000-pound-plus, eight-wheeler — without the nose piece — rides, drives and steers with the maneuverability of smaller row croppers. The Challenger 1050 is essentially the same machine splashed with CAT yellow.

I had to ask the well-schooled Agco rep shadowing the machine: “Aside from the ride and maneuverability, why build or buy a mega-row cropper?”

Next week, I’ll tell you about a new piece of dairy technology that showed up first on the East Coast at New York Farm Show.

Bite-sized morsel
Soaking up innovative ag ideas is the life blood of every successful farmer — and farm editor. It’s invigorating, fun and mandatory to “stay in the game.”

Ag technology investments reached a record of $25 billion globally in 2015. And they were expected to rise substantially in 2016, according to a report from the Boston Consulting Group, which connects investors with ag companies. And the growth continues in 2017 in the Northeast and Mid-Atlantic, as we recently reported, with two major Deere dealerships.

Those investments include research and development, deals, partnerships, equity stakes and technology centers, according to the Boston Consulting Group. Early-stage funding from venture capital firms reached $3 billion globally, up from $900 million in 2013 and $400 million in 2010.

The report's findings reflect a survey of more than 50 executives from seed, fertilizer, meat, grain and farm equipment companies, plus 15 venture capital investors. About 58% of the venture capital firms expect their start-up investments to be sold to larger companies.

I suspect it’s higher than that. As one private seed company CEO told me, that has both positive and negative connotations.