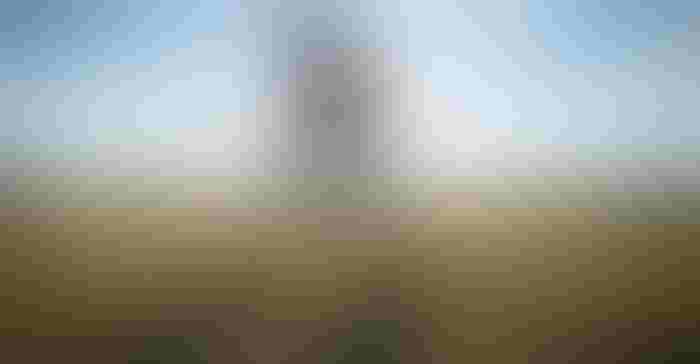 When asked what kind of tillage he uses, Jon Branstrator, says — with a resounding proudness in his voice — “earthworms.”

For more than 20 years, he’s been on a mission to farm smarter, from both a business and environmental perspective. He’s farming what was his father’s farm, including 175 acres of corn, soybeans, wheat, rye and cover crops in Clarksville, Ohio. While geographically it’s the same ground, the soil composition and health are much different.

In an ideal situation, Jon never sees his soil, as it’s always covered in live plants or residue, and he prefers to plant green into a living crop. He has a laundry list of benefits this practice provides, including soybeans that emerge and can withstand some of the more common intense rains without splash-up on the plant. For that same reason, his pumpkins come out of the field clean, and there’s less disease because they’re not sitting on soil.

In his waterways, he plants pollinator strips, including milkweed for monarch butterflies. “Predators of crop pests — like hoverflies that feed on aphids — also use them as a nursery,” he adds.

Since buying and taking over the farm shortly after his father’s death in 1995, Jon focused on vegetable production, as well as peaches and other fruits. He marketed the products through farmers markets, wholesale and U-pick operations. He even spent a short period running farm festivals and pumpkin patches.

Today, he is focused on heritage grains. Rather than growing ordinary commodity wheat, he is growing unusual varieties, like the hard red winter wheat Red Fife, along with hard and soft white wheat varieties. He also grows Danko rye and has established a breeding plot for naked barley.

The farm has transformed many times, but the one constant has been his desire to leave the land better than how he found it by reversing erosion and degradation of the soil.

“Jon’s philosophy goes by the old saying, ‘The best fertilizer is the footsteps of the farmer,’” says Molly Conley, director of the Warren County Soil and Water Conservation District, who nominated him as an Ohio Conservation Farm Family award winner. “He is always observing the land to try to make it the best it can be and to spread the word about how others can do the same.”

Jon is a regular partner with the Warren County SWCD, participating in education programs and hosting ag tours for farmers, school and senior groups, and community organizations. “He is gracious with his time and is always willing to serve as an educational spokesperson for conservation,” Conley says.

In addition to pollinator-friendly, multi-species cover crops, the farm is completely no-till, has several water and sediment control basins, and has a solar field. Just beyond the solar panels is a cover crop field of sunflowers he harvests for bird seed.

Jon designed and built the solar system after attending a five-day course. His 7.5-kilowatt solar field sits on a 100th of an acre. During sunny days when he’s not pulling energy, he’s pushing it to the grid, building up a positive balance on his account.

“In the fall and winter when I’m doing things and there’s not a lot of sunlight, then I draw my balance down,” he says. “I’ve built the system for $2 a watt, and it’s worked flawlessly for seven years.”

He also conserves energy by driving a Chevy Volt car that’s a plug-in hybrid. “It goes about 40 miles before the gasoline motor kicks in,” he says. “I choose not to drive a 1-ton diesel pickup truck around when all I have to do is pick up some parts. I’m actually running on sunshine …  and that feels pretty good.”

A descendant of Andrew and Francis Branstrator, who founded the 400-acre farm in 1823, Jon is the fifth generation to farm the soil and, in many ways, has returned to an earlier way of farming.

But it wasn’t always that way. As a young man and at a time when farming corn fencerow to fencerow was encouraged, Jon’s father, Ralph, sold off the livestock and commercialized production, while including a lot of purchased inputs, Jon recalls.

Revisiting long nights of moldboard plowing, “I was always thinking there has to be a better way to farm,” says Jon, who notes the heavy use of fertilizer and pesticides returned high yields for a time before resistant insects, weeds and other problems began to surface.

Jon wanted to diversify and try new things; his father did not. Jon, in his late 20s and early 30s, left the farm to work in Central America and Costa Rica for seed breeding companies. He attended some college, learned Spanish and created lifelong friendships, while gaining an in-depth look at plant production and the importance of crop diversity and habitat establishment for wildlife.

He moved back when his mother became sick in 1989 and took a job in town. A decade later, when both his parents had passed, the opportunity to own the farm arose.

“I didn’t have much money and hardly any equipment, but I was able to pull it off because of good credit and the help of a neighboring farmer,” Jon says. “Thanks to mentors like Vince Utretch and Tom Spellmire, my eyes were opened to soil health, along with the excellent staff at the Warren County SWCD District.”

When Jon was growing an array of fruits and vegetables, and hosting farm festivals, he said he was beginning to have trouble enjoying his farm because of the vast amount of time spent in the van making deliveries and marketing. So, he scaled back to just pumpkins and then returned to a project he had started back in the 1970s with an interest in ancient grains and a mill he bought.

“I think I was a little ahead of my time then, but I still had that old mill in the barn, so I pulled it out,” he says. “There’s a real movement and interest in high-quality ancient grains.”

Distillers are interested, as are brewers and artisanal bakers of sourdough and pastries. He’s overhauling part of a barn to create a milling room and has a food manufacturer permit.

Through a partnership with Jay Brandt of Walnut Creek Seeds in Carroll, Ohio, whose main business is cover crop seed mixes, and Dresbach Farms, a miller specializing in gluten-free products, they have banded together to create Regenerative Mills. All are embracing regenerative soil health principles to create locally grown and milled grains. Jon hopes to provide alternatives to traditional commodity crops, while adding value to the farmer and supplying the consumer with a homegrown, healthy supply.

In line with his love of the land, Jon’s 200-year-old, fifth-generation farm is now in a farmland conservation easement program through the Cardinal Land Conservancy, with the help of the Tecumseh Land Trust, which will ensure the land will forever be protected from development.

The family and community: Jon Branstrator has downsized the farm to be able to do most everything by himself and focus on land care and food-grade grains. He shares equipment and expertise with the George and Stingley neighboring farms.

The farm: Branstrator Farm LLC is growing heritage grains like Red Fife hard red winter wheat, Danko rye, Ohio Blue Clarage corn and Leaming’s yellow corn developed in southwest Ohio in the 1850s. A grain milling facility is set up to process the grains. Photovoltaics supply all the electricity needed. The soil is kept covered with residue and living plants all year. Organic matter and biological diversity is being rebuilt through no-till, longer rotations and multi-species cover cropping. Commodity crops are grown on the balance of acres.

Outreach and education: Branstrator Farm has hosted college students and community organizations on photovoltaic energy production, soil health and cover crops. Jon is a soil health educator and has given lectures as far away as Ethiopia.

Community outreach and leadership:  Jon is engaged in the local community as a Clinton County Regional Planning commissioner and treasurer, and has served on local land trust and tree commission boards. He is a member of the Ohio No-till Council, Seed Savers Exchange, Cardinal Land Conservancy and Artisan Grain Collaborative.